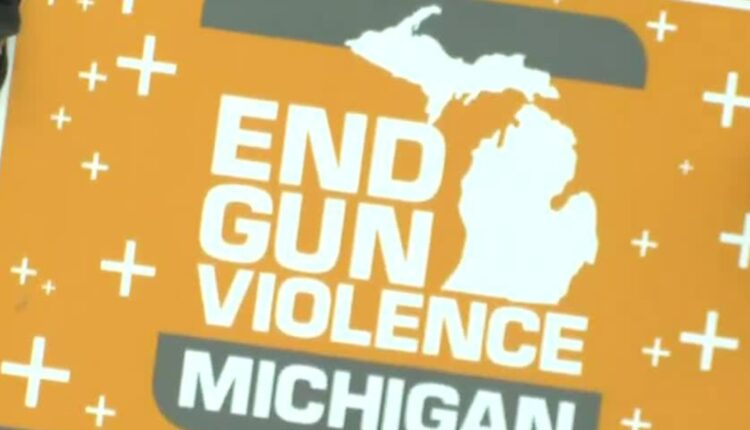 End Gun Violence Michigan held rallies and prayer services across Michigan Wednesday. The group wants to see the new laws passed in the first 100 days of the legislative session.

However, Republican lawmakers don’t think this would slow violent crime.

“Every day we hear stories about lives cut short for no reason,” said Rep. Brenda Carter during the rally outside the Capitol in Lansing.

She is one of many Democratic lawmakers hoping to change the law. They want to see what is being called “common sense gun laws” passed quickly this session.

Carter said it was important because her son and nephew died after being shot.

“Now I live with that every day. I’m a survivor. The trauma of that, I can’t escape it,” said Carter.

End Gun Violence Michigan is proposing four new laws, including requiring people to lock up guns in homes with children, have universal background checks for all gun purchases, red flag laws which allow judges to temporarily take someone’s gun if there is a risk someone could get hurt and ban people convicted of domestic violence from owning a gun.

Carter said these sort of laws could prevent school shootings like the one at Oxford High School in 2021.

“We’re not trying to take away guns from sensitive gun owners. They’re following the law. It’s the ones out here doing random acts of violence,” said Carter.

Lightner said she’d rather see lawmakers work across the aisle to invest in more the state-run children’s mental health hospital.

“You look at some of these kids, you look at Hawthorne. Hawthorne needs help. We need to divert resources there and invest in our young people. And be able to provide more than one councilor at a school,” said Lightner.

gov. Gretchen Whitmer said she would sign these proposals if she made it to her desk. She outlined gun control as a priority during her inauguration speech.