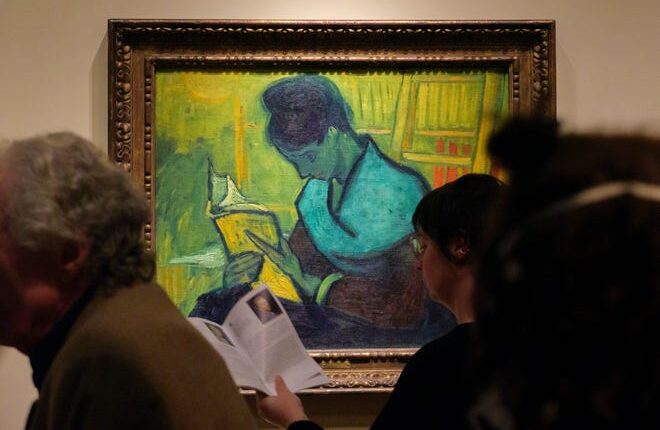 Detroit — A Detroit federal judge on Friday dismissed a lawsuit to seize an allegedly stolen Vincent van Gogh painting from the Detroit Institute of Arts and give the artwork to its purported owner in Brazil.

US District Judge George Caram Steeh ruled that the DIA did not have to hand over “Liseuse De Romans,” also known as “The Novel Reader” or “The Reading Lady,” which is temporarily displaying in an exhibition that ends Sunday. The judge ruled the artwork is protected by a federal law granting immunity to foreign artwork on display in the United States.

The DIA lawyers argued that the artwork could not be touched because it is protected by a federal law called the Immunity from Seizure Act granting immunity to foreign artwork on display in the United States.

“The painting is immune from seizure pursuant to the act, which prohibits the court from issuing an injunction or entering any other order that would deprive the defendant of custody or control of the painting,” Steeh wrote in an 11-page decision. “Because the court cannot grant the ultimate relief sought by plaintiff, the lawsuit will be dismissed.”

The purported owner, Brazilian art collector Gustavo Soter and his art brokerage company, Brokerarte Capital Partners LLC, said the painting was stolen and had been missing for nearly six years until it was discovered recently on display at the DIA as part of the museum’s “Van Gogh in America” ​​exhibition.

Steeh had nine days earlier ordered that the painting not be removed or hidden, and the DIA posted a security guard near the Van Gogh artwork in recent days.

“The DIA welcomes the court’s ruling enforcing the Federal Immunity from Seizure statute, dismissing the litigation regarding ‘The Novel Reader’ and noting that there were no allegations of wrongdoing by the DIA,” according to a Friday statement from the museum. “The museum looks forward to welcoming visitors from around the world to the final weekend of the ‘Van Gogh in America’exhibition.”

The decision ends a case about a painting that has helped to draw large crowds to a rare oil painting by the Dutch Post-Impressionist master and a focus on the sharing between countries of culturally significant artwork, even one with a checked provenance. Van Gogh created the painting in 1888, and it’s worth more than $5 million today.

At a Thursday hearing, Steeh urged the DIA and Soter to negotiate a settlement. But with the exhibition scheduled to end over the weekend, Steeh released his decision late Friday afternoon.

In the suit, Soter attached a bill of sale for the painting for $3.7 million that he purchased on May 3, 2017, but he never took possession of the painting. After purchase, he arranged for it to be stored in Brazil by a third party. He eventually lost contact with the third party and was unaware of the location of the painting until seeing it in the DIA’s possession as part of the “Van Gogh in America” ​​exhibition.

The painting was an investment, and Soter eventually planned to sell the artwork.

“The artwork itself, being recognizable, my client assumed it would resurface again, and it did,” Soter’s lawyer, Aaron Phelps, previously said.

“My client would like to get the painting before it disappears again,” Phelps told the judge Thursday.

During the Thursday hearing, Phelps said he was contacted Wednesday by a New York lawyer who claimed to represent an unidentified client who also purports to own the Van Gogh painting. That client was not identified in court.

In court Thursday, DIA lawyer Andrew Pauwels faulted Soter’s company for failing to report the artwork as stolen or notify the FBI.

“He doesn’t explain why he didn’t do anything for the last five years to recover” the painting, Pauwels told the judge.

During the hearing, Soter’s lawyers said the law does not protect thieves or stolen artwork and criticized the Detroit museum’s lawyers for continuing to shield from public view the identity of the art collector who loaned the Van Gogh painting to the DIA. A sign accompanying the painting says it is on loan from a private collection in São Paulo.

The DIA has not disclosed any further ownership information, and its lawyer, Pauwels, refused comment when approached Thursday by reporters.

Soter did not allege any misconduct or wrongdoing by the DIA but requested that the DIA be ordered to hold the painting pending resolution of the lawsuit, or deliver the painting to the plaintiff as the rightful owner, pendinga final judgment.

But Steeh sided with the DIA citing the Immunity from Seizure Act, which “serves the important national interest of contributing to the educational and cultural development of the people of the United States.” It only prohibits non-owners from seizing artwork from owners, Soter’s lawyer argued to the judge.

“The purpose of the act is not to protect the owner of the object inasmuch as it is to encourage the exhibition in the United States of objects of cultural significance from abroad,” the judge wrote. “Here, the lender was in possession of the painting and the defendant engaged in due diligence to determine that the painting had not been reported as lost or stolen.”

In developing the “Van Gogh in America” ​​exhibition, the DIA entered into agreements to secure loans of artwork from foreign collectors and museums. On May 12, the DIA submitted its application for the painting, among other works of art, to be immune from seizure, the judge said in his ruling.

“Furthermore, the Director of the United States Information Agency determined that each of the requirements of the Act were met,” Steeh concluded.

The DIA’s Van Gogh exhibition opened in October and celebrates its status as the first public museum in the United States to purchase a Van Gogh painting, a self-portrait created in 1887. The exhibition ends Sunday and is sold out.

The exhibition includes 74 Van Gogh paintings and is considered one of the largest of Van Gogh’s work in America in the 21st century. The authentic Van Gogh pieces are on loan from roughly 60 museums and collections all over the world, including “The Bedroom” from the Chicago Institute of Art; “Van Gogh’s Chair” from London’s National Gallery; and “Starry Night (Starry Night Over the Rhone)” from Paris’s Musee d’Orsay.