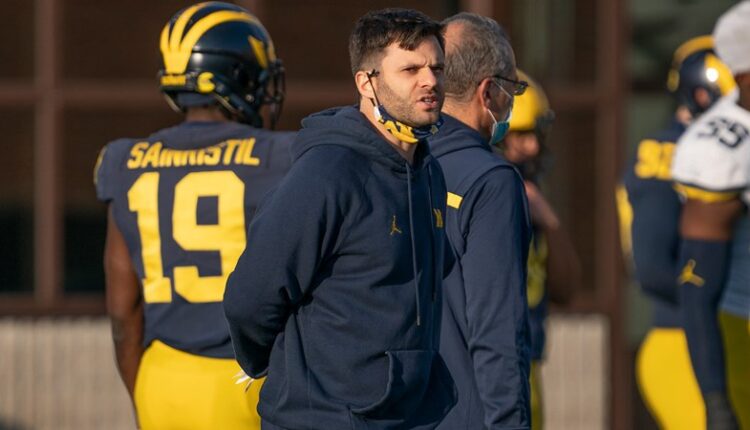 In the trenches: The connection with Macdonald helped Helow Land in Ann Arbor

In the trenches: The connection with Macdonald helped Helow Land in Ann Arbor

In this week’s edition of “In the Trenches” Jon Jansen welcomes the new linebacker trainer George Helow discussed his first few weeks in Ann Arbor, the early stages of establishing the new identity of the defense, how he developed during his previous stints as a coach, and his close relationship with the defensive coordinator Mike Macdonald.

The University of Michigan football coaching team has many fresh faces, but two defensive coaches know each other well, in large part due to the consistency with the schedule. New linebacker trainer in 2013 George Helow was a graduate assistant in the state of Florida and the new defense coordinator Mike Macdonald was a graduate assistant in Georgia. The Seminoles and the Bulldogs had two common opponents this season – Florida and Clemson.

As a result, Macdonald and several other Georgia employees traveled to Tallahassee to discuss these teams with Helow and some Florida state coaches. Sure enough, Helow and Macdonald hit it off and had one-on-one talks about football.

Their relationship grew over the few months they spent together for the Georgia staff in 2014 before Macdonald left for the Baltimore Ravens. They even went skiing together when Helow was in Colorado, and hung out together when both were in the Baltimore area – Macdonald still with the Ravens and Helow in Maryland. Their friendship played an important role in Helow’s response to an offer to come to the University of Michigan a few months ago.

“When [Mike] and Coach Harbaugh called with the opportunity to go to Michigan. It was really a no-brainer because of our relationship and then because of the place this is and how special it is, “Helow said on the In the Trenches podcast this week with Jon Jansen.

Although native of Jacksonville, Florida, Helow has spent most of his playing and coaching career in the South, he grew up understanding and appreciating the aura and mystique of football in Michigan. He’s loved it even more since arriving in Ann Arbor.

“It’s all Michigan,” said Helow. “It’s all ‘Go Blue’. Everyone is behind us and it’s like a one-way mindset.”

As the team nears the end of spring football, Helow and the rest of this young, energetic coaching team are focused on developing the team’s culture, habits and behaviors. Defensively, Helow believes this begins with effort.

“I want the guys to go out every day and do everything I can,” said Helow. “It’s not what we do, it’s what we do. It’s the way you run to the ball, how you put your helmet on … how you hit blockers, how you take angles to the ball . “

There’s still a lot to be done, but Helow is happy with what he’s seen of the linebackers and the defense as a whole.

“When you look at the tape from the first to the ninth day, it’s like day and night and that has to be your goal,” said Helow. “You take a little time every day and you feel better.”