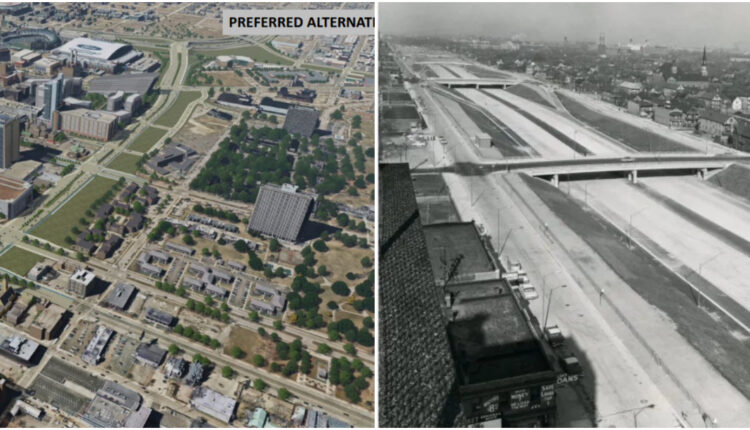 The Michigan Department of Transportation has selected two dozen people for a community advisory committee that will advise on transforming Interstate 375 into a street level boulevard, and what should happen with the $50 million dollars worth of land that will be made available.

“We see them as being very, very instrumental,” Jonathan Loree, senior project manager for MDOT, told BridgeDetroit of the volunteer group that got started this month with an orientation.

The state plans to remove the one-mile stretch of highway in Detroit that contributed to the destruction of a thriving corridor for Black residents when it was built in the 1960s. In September, federal officials announced a $104.6 million grant to speed the start of the project  from 2027 to 2025. The sunken highway will be replaced with a six-lane, street-level boulevard with wide sidewalks and bike lanes. In the process of removing the highway, approximately 25 to 31 acres of valuable land will open up.

Loree said the committee will play a big role in the community benefits aspect of the project “because there’s just so many complex issues and nuances that come with that.”

Although there wasn’t a formal application process for the advisory group, Loree said MDOT coordinated with Detroit’s Department of Neighborhoods to get the word out about it to stakeholders along I-375. The committee, he said, plans to hold monthly in person meetings.

“We were working with a local advisory committee during the environmental phase so some of those stakeholders and people that really participated in that from the various residential complexes and organizations around the corridor, some of those were brought in,” Loree said.

Detroit’s Department of Neighborhoods did not identify specific individuals to serve on the volunteer committee or assist MDOT in the selection process, according to Ray Solomon, the department’s director. But, the Department of Neighborhoods did provide MDOT with a list of apartment buildings, businesses, block club captains and members from the impacted area. From there, MDOT sent out meeting invites and conducted the committee selection process.

The group represents a diverse mix of residential and development interests along the highway, including residents from Lafayette Park, Chene Park Commons, Jean Rivard Apartments as well as people like Mark Bennett, a local real estate developer. Bennett owns Exchange and Lafayette West, two upscale housing projects that are under construction in the neighborhood.

Loree said it’s an “initial list” but that MDOT is expecting some turnover in the future or potential changes based on the level of participation from members.

Loree said the members will help develop ideas before they are brought to larger public forums.

“With the development of I-375 coming in, because it’s coming into our community and changing things, I volunteered to sit on the committee to bring the information to the community and get their feedback on things that concern them,” said Mona Ross-Gardner, president of Brush Park Community Development Corp. and owner of The 234 Winder Street Inn, a bed and breakfast off of I-75.

Ross-Gardner said she would like to see greenspace and beautification with the boulevard, and has concerns about how the construction and temporary rerouting will affect local small businesses.

While different elements of the boulevard will be up for discussion – mainly around land use and community enhancements – Loree said the number of lanes, not so much.

Critics have expressed concern that the planned boulevard with six lanes would replicate the feeling of a highway and do little to reconnect Detroit.

“We can hone in on some of those design elements with this group,” Loree said. “The width of it is something that we don’t have as much flexibility on because we do have traffic to serve,” said Loree, pointing to the downtown business district and riverfront destinations. “The lanes are fairly set.”

The number of lanes is top of mind for Bryan Boyer, an assistant professor at the University of Michigan’s Taubman College of Architecture and Urban Planning and a Lafayette Park resident selected as a committee member.

“Bringing the highway up to grade but trying to keep the same amount of throughput in terms of vehicles means that MDOT has now designed something that has nine lanes of traffic that you would have to cross if you’re walking from the east side to downtown,” Boyer said. “And that’s actually many more than what you end up crossing currently with the bridge.”

Boyer said he’s attended all public meetings about I-375 for several years and joined the committee after learning of the opportunity from his housing co-op’s management team.

The nine lanes, which Boyer said would include turn lanes, is a “result of this region failing to invest in public transit for decades.”

“What’s unfortunate is that bringing the highway back to grade and turning it into a street is a once-in-a-generation opportunity,” he said, “and we’re about to lock ourselves into a very old fashioned way of thinking about the streetscape, because we haven’t made investments in public transit.”

authored by
First published at https%3A%2F%2Fwww.bridgedetroit.com%2Fmdot-i-375-project-detroit%2F

Rate the Commerce: Bojan Bogdanovic to the LA Clippers

These northern Michigan cities had record-high temperatures on Friday