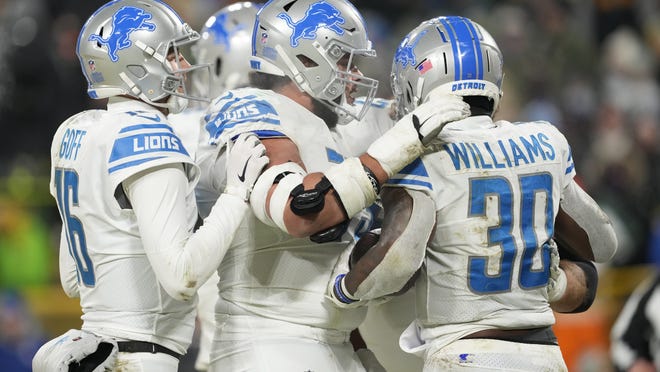 Here are their NFL opponents

The Detroit Lions’ upset of the Green Bay Packers, 20-16, on Sunday night at Lambeau Field had a trickle-down effect on their 2023 schedule.

They will not host the Los Angeles Rams during the 2023 NFL regular season, which means no return of Lions former franchise quarterback Matthew Stafford. At least until 2024, when the Rams are scheduled to visit the Lions at Ford Field.

A Lions loss to Green Bay in the regular season finale would have pushed the Lions into third in the NFC North, where they would have played the fellow third-place team in the NFC West. Instead, they finish second in the division, ahead of Green Bay and Chicago and behind division winner Minnesota.

TRENDING:Detroit Lions show grit, creativity and learn a big lesson to KO the Packers from playoffs

The Lions play the entire NFC South and AFC West, along with the usual two games against each division opponent. They’ll have nine away games and eight at home.

The Lions will reap the rewards of LA’s lost 2022 season, which saw Stafford play just nine games and finish with 10 touchdowns and eight interceptions. LA has gifted the Lions the sixth overall pick in April’s draft, by virtue of their 5-12 record, as part of the Stafford trade two years ago. The Lions will also pick 18th overall with their own selection, the last of the non-playoff teams.

The Lions (9-8) were eliminated from the playoffs about 50 minutes before kickoff Sunday, after a 19-16 overtime win by Seattle over the Rams. The Seahawks grabbed the seventh and final NFC playoff berth thanks to the Lions’ win over the Packers. Now, Seattle will be able to thank the Lions in person next season. (The Lions lost, 48-45, to the Seahawks in Week 4 at Ford Field, giving Seattle the tiebreaker.)

Here are the Lions’ 2023 opponents, with the NFL schedule to come out this spring: