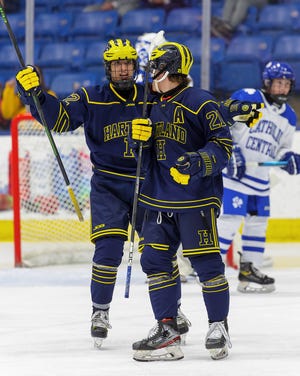 PLYMOUTH — Was it just a bad night at the rink for Hartland at a time of year when hockey teams can afford a clunker?

Or is Detroit Catholic Central just that much better than every other team in Michigan?

The ultimate answer will come four months from now in the same building that the two highest-ranked teams in the state opened their 2022-23 seasons.

Top-ranked Catholic Central, winner of the last three state Division 1 championships, scored 10 seconds into the game and never let up in a 7-1 rout of second-ranked Hartland Wednesday night at USA Hockey Arena.

It was a result of Hartland coach Rick Gadwa fearing was possible when he assessed the vibe within his team prior to the game.

“I was hoping I wasn’t right, but I definitely sniffed that,” Gadwa said. “A little bit of a group of returners that have done some good things that maybe think we’re a little bit better than we are. Not that they’re not, but they just don’t understand that when you start over and you get back to it, it’s a reset and you have to start completely over and get back to work. We haven’t got back to work yet, and it showed.”

It was the first meeting between the two state powers since Catholic Central beat Hartland 8-0 on Feb. 21, 2018. The Eagles bounced back from that mercy-rule loss in their regular-season finale to win their first state championship, but they didn’t have to go through Catholic Central that season.

Hartland will likely have to take down the Shamrocks to win a fourth state championship in five seasons, having moved from Division 2 to Division 1 this season. Catholic Central and Hartland were not only ranked 1-2 in the Division 1 preseason poll, but in the all-division Super 10 rankings.

“CC, they’re the best year after year, and that’s a great measuring stick for us to start,” Gadwa said. “We know where we’re at now. This game needed to happen. I’m happy it happened. We can now move forward, get all this talk about of the air of 1 and 2. We’re not 2; we’re not even close to 2 right now. Look how many new faces we saw today. It’s going to take the group coming together day by day if they want to do that.”

It’s a loss the Eagles hope to look back on as a positive later in the season.

“I think it’s a really good thing for us,” senior forward Ben Pouliot said. “Obviously, it hurts right now. We can’t really dwell on this, but we’ve got to take from it. That’s where we’ve got to be at the end of the year. Starting tomorrow, it’s going to be a grind at every practice, every game.”

Division 1 has been dominated by Catholic Central and Brighton for the past decade, but Shamrocks coach Brandon Kaleniecki welcomes the added competition in Division 1.

“It’s great for high school hockey,” he said. “I have no qualms about that. Ultimately, you want to play the best. If you look at the schedules, I don’t think any of us run. We all play high-end quality opponents night in and night out, whether in the MIHL or KLAA. There’s no easy nights. This was kind of another example of that.”

The Shamrocks struck just 10 seconds into the game when Jackson Walsh went to the net and converted a pass from Landon West. The score reached 5-0 before Lucas Henry scored Hartland’s only goal with 5:23 left in the second period.

“Obviously, that one hurts,” Pouliot said. “Ten seconds in and they score. After that, you’ve got to bounce back. You have to forget about it, because you have to score to win. If you can’t score, you can’t win. We only put up one on the board, and that’s not going to be enough for us.”

Goals by West and Hero Schmidt gave the Shamrocks a 3-0 lead after one period.

The second period began like the first, with Catholic Central winning the opening faceoff and getting a goal 12 seconds in from Andrew Urbain. Hartland senior goalie Colin Babcock was pulled after allowing four goals on 11 shots in his high school debut.

Collin Dell scored on the Shamrocks’ first shot against sophomore Brady Hubenschmidt at 5:12 of the second period.

“That’s been one of our strengths every year,” Kaleniecki said. “We certainly have some high-end guys that are guys we’re gonna lean on and guys who are gonna produce. Ultimately, what’s going to help push us to another level is those other guys that are going to contribute. It’s nice to have that. That’s a luxury. Some nights, you’re not going to have that.”

“When we look at the game realistically, it didn’t feel like a 7-1 game,” Kaleniecki said. “We know it.”

Sirens to signal Santa’s arrival in Manistee, 80 years ago