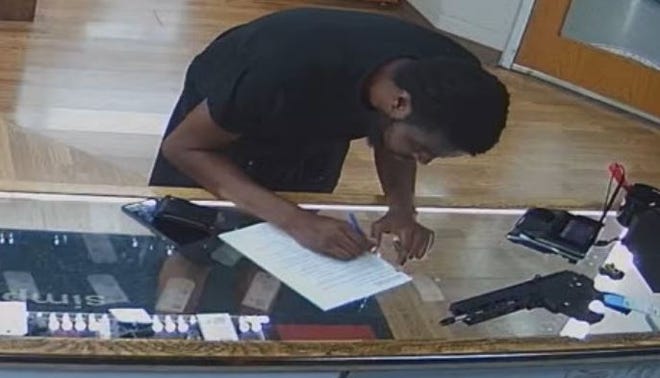 A Grand Rapids man was sentenced Monday to more than three years in federal prison for illegally purchasing and trafficking guns, including one that was used to kill a 2-year-old girl last year.

Federal officials said Martin charged customers $50 to $100 per firearm to lie on purchase forms, saying he was buying the guns for himself when he was really purchasing them for other people — a tactic called “straw purchasing.” Many of Martin’s customers were convicted of felons and prohibited from buying guns.

Martin was arrested by federal authorities in August 2022. They also said numerous Martin guns illegally purchased and trafficked were later used in crimes.

Among them was the fatal Feb. 9, 2022 shooting of a 2-year-old girl in Wyoming, Mich. Martin purchased the Ruger semi-automatic pistol in September 2021. Officials said the girl’s father, Seninta Parks, was charged with her death.

They also said that a Glock .45 caliber semi-automatic pistol that Martin purchased in September 2021 was used in a Sept. 11, 2022 shooting on the Blue Bridge in downtown Grand Rapids. Four people were injured. Police also said the same gun was used in two previous shootings in Grand Rapids.

“This sentencing is a huge win for public safety in Grand Rapids. We know that illegal guns from this trafficker were used in the shooting on the Blue Bridge in September,” Grand Rapids Police Chief Eric Winstrom said in a statement. “I am grateful for the work of the US Attorney’s Office and the ATF to investigate and build this case. Getting illegal guns, and the source of those guns, off the street is a critical piece in reducing gun violence in our city.”

Federal officials said the whereabouts of most of the guns Martin straw purchased remain unknown. However, police have recovered 14 of them.

Ukrainians by the thousands arrive in states, but with a time limit ⋆