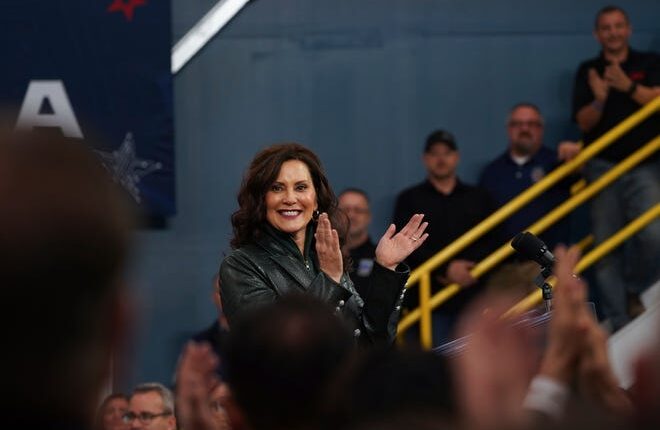 LANSING — Gov. Gretchen Whitmer is promising a family-friendly schedule of events for her second inauguration, to be held New Year’s Day outside the Capitol Building in Lansing.

The ceremony begins at 10:30 am, Whitmer’s office said in a Monday news release. Under the state constitution, her second four-year term officially begins at noon on Jan. 1.

Following the swearing in of Whitmer and other top state officials in the outdoor ceremony, “there will be winter games, hot cocoa and snacks, live ice sculpture carving, and more,” the news release said. “The ceremony and accompanying family-friendly activities are open to the public and free to attend.”

Those planning to attend are asked to register for free tickets at michiganstrong.org, the website of the inaugural committee. Details of other inaugural events are still pending.

In the news release, Whitmer promised to govern as a practical problem solver, to get things done.

“It is the honor of a lifetime to have the support and trust of millions of Michiganders to continue serving our beautiful state,” Whitmer said. “Over the last four years, our state has shown that we can come together as Michiganders to tackle the toughest challenges of our lifetime. We’ve made great progress, but our work isn’t finished.”

Also taking the oath of office will be Lt. gov. Garlin Gilchrist, Secretary of State Jocelyn Benson, Attorney General Dana Nessel and those members of the Michigan Supreme Court, Michigan Court of Appeals, State Board of Education, University of Michigan Board of Regents, Michigan State University Board of Trustees, and Wayne State Board of Governors who were elected Nov. 8.

The swearing-in ceremony will begin with a musical performance by the 126th Army Band of the Michigan National Guard. Other ceremony highlights will include recognition of tribal nations, a parade of flags, an invocation by Pastor Rory Marshall Jr. of Lighthouse Full Life Center in Grand Rapids, a 19-gun salute by the 1st Battalion 119th Field Artillery, a flyover by the Michigan Air National Guard and prayers by Rabbi Alicia Harris of Congregation Shir Tikvah in Troy and Imam Mohammad Ali Elahi of Islamic House of Wisdom in Dearborn Heights.

The inauguration is paid for by donations and by ticket sales to any inaugural events that are not free, the news release said.

After Tuition, Books, and Room and Board, Colleges’ Rising Health Fees Hit a Nerve