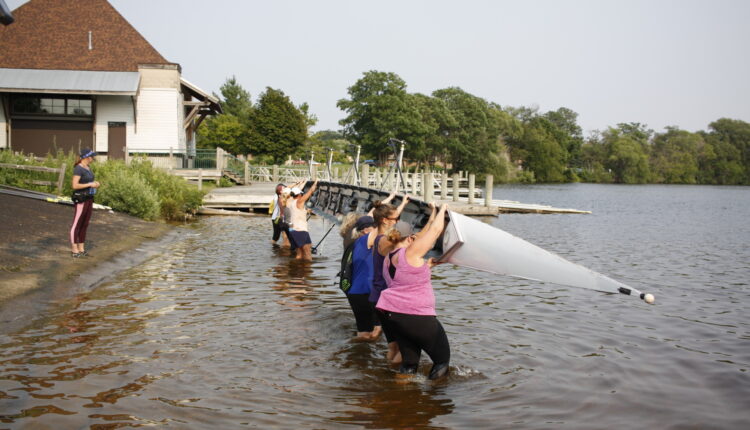 Get On The Water with Traverse Area Community Rowing

Rowing silently is proper decorum, both for safety and to prevent confusion. Even the coxswain speaks in soft tones, utilizing a headset microphone that projects his or her voice just enough to be heard over the creak of the oars, a gentle cadence of “Go…and row…” The first command initiates the even swing of the oars rearward, the second calling for the oars to dip into the water and sweep forward.

The overall effect is idyllic and peaceful. The reticence of the crew allows the lake and the oars to converse instead. There is the creak of the oarlocks, the delicate dip of oar blade cleaving surface, and then the whoosh of the oars treading water rearward, a single breath as if the shell were exhaling.

This suspended state cannot last. An oar drags too much; a pull of the oar is a hair too late. The shell sheds its immortality and is bound once more to the stringent laws of physics. It happens. This calls for a reset and an opportunity to once again focus on form, building the sequence from one to the next. Perhaps counterintuitive, it is important to watch the rower in front of you rather than your own blade. It’s tempting to monitor your own motions, but observing the timing of the person in front will help you subconsciously lock into their timing. This continues, building that sequence from teammate, to self, to the entire shell.

The amount of concentration required takes its toll. Perhaps more than anything at this stage it is the mental exertion, the desire to will your body to make the exacting motions it does not yet know how to do consistently. But rather than frustration, there is communal joy. This is a collection of learners, of seekers who are quite literally in the same boat. They are pulling on the oars just as imprecisely as you are and, more important, they have also felt that instance of freedom. They have also sensed in coordinated oar strokes the allure of potential. Somewhere upon the flat cold surface of the lake is a taste of perfection. You just have to row out there to get it.

Experts discuss importance of COVID-19 vaccines for children under 5 ⋆