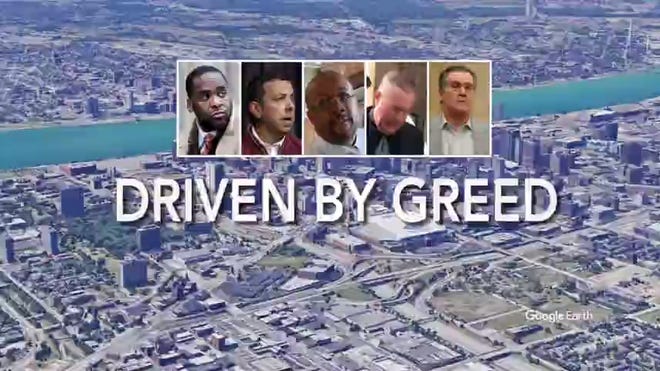 A former Detroit police detective charged in a federal investigation targeting corruption within Detroit City Hall, law enforcement and municipal towing operations is expected to plead guilty and admit to receiving $7,724 in bribes, according to a court filing Friday.

A lawyer for Pacteles, David Tholen, could not be reached for comment immediately Friday.

Federal prosecutors Friday filed a criminal information against Pacteles, a type of charge that indicates he is expected to plead guilty to one bribery count that could send him to federal prison for up to 10 years.

The charge was filed 13 months after investigators arrested Pacteles, a detective who was assigned to an FBI task force before retiring after a 21-year career in 2020.

Pacteles was charged with bribery and accused of receiving $7,724 in things of value from an unidentified towing industry figure and undercover FBI agent, including a used car and $3,200 cash, according to the complaint. In return, Pacteles provided sensitive police information, including vehicle registration data from the restricted database Michigan Law Enforcement Information Network, or LEIN, prosecutors alleged.

At the time of his arrest, Pacteles was working as an officer for the Hamtramck Police Department.

The court filing Friday is the latest development involving a public official in Metro Detroit charged amid a prolonged federal assault on municipal corruption. In the last dozen years, more than 110 labor leaders, politicians, police officers and bureaucrats have been charged with federal corruption-related crimes, according to a database built by The Detroit News.

“Operation Northern Hook” emerged publicly in August 2021 when FBI agents raided multiple locations across Detroit, including City Hall. They searched the offices and homes of Councilman Scott Benson and former Councilwoman Janeé Ayers, along with the homes of their chiefs of staff.

The four public officials have not been charged with doing wrong amid the ongoing investigation.

Four others have pleaded guilty. They are:

⋅ Former Detroit Police Officer Daniel Vickers admitted conspiring with former Detroit Police Lt. John Fitzgerald Kennedy to accept money and other valuable items in exchange for favoring a towing contractor. Vickers pleaded guilty to bribery conspiracy in October, one year after being arrested and charged with multiple counts of bribery and bribery conspiracy in a 20-page federal indictment.

⋅ Spivey pleaded guilty and is serving a two-year federal prison sentence for receiving almost $36,000 in bribes.

⋅ Kennedy, who was in charge of rooting out department misconduct, pleaded guilty to pocketing bribes and is awaiting a possible prison sentence.