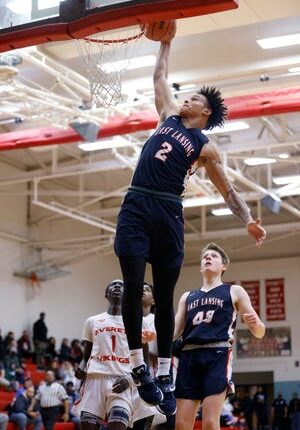 It had been back-to-back years that Everett had taken down East Lansing while in it’s home confines of Earvin “Magic” Johnson High School.

But in an important, early season matchup between CAAC Blue foes, it was East Lansing who got revenge for the past couple seasons, using strong defense and a fourth quarter run to prevail over Everett 62-47.

“It was a tough one, but I like the fact that we won the game, and just to get the victory is good,” East Lansing coach Ray Mitchell said. “Everett is a tough team, especially when they play at home, it’s always tough for us and we need to match other team’s intensity.”

East Lansing narrowly led after the first before making it a nine-point game at halftime. The Trojans’ full court press caused some serious havoc, both both sides had trouble finishing at the basket.

Everett cut the lead to just six at 46-40 early in the fourth quarter, but East Lansing’s defense forced critical turnovers that led to easy fast break points, sparking a 12-0 run that was capped off by an emphatic dunk from senior forward Evan boyd

Sophomore forward Cameron Hutson had 15 points to lead the Trojans, while Boyd added 14 points – eight in the fourth quarter – to help East Lansing pull away.

Hutson, the son of former Michigan State standout Andre Hutson, is starting to come into his own with a more expanded role this season on varsity for the Trojans.

“He’s one of our better players and he had a great summer, he really cared this summer,’ Mitchell said. “We had a lot of guys playing football, but he committed to basketball and was with us so we know what he can do and he’s going to have a great season and this is just the start.”

Sophomore guard Nathaniel “TJ” Benson led all scorers with 18 for the Vikings, while junior guard Lajune Lubrin had 13 for Everett.

East Lansing (2-0) will play at the Don Jackson Invitational at Kalamazoo Central on Saturday, where it will play Detroit Western at 4:30 pm. Everett (1-3) will play Saginaw at 8pm at Delta College on Friday.

Jake Higginbotham excited for 2023 after trade to Tigers