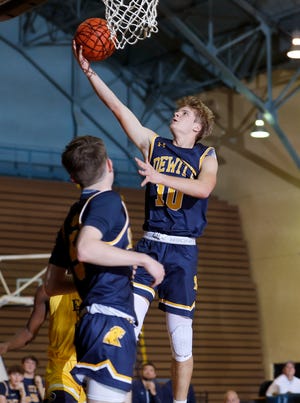 EAST LANSING — Bryce Kurncz, Grant Crawley and Adam Flannery hit big free throws in the fifth overtime to help the Panthers (8-3, 1-2) fend off East Lansing for the CAAC Blue victory. Kurncz had a game-high 39 points and added 11 rebounds to lead DeWitt, which won his fourth straight. He surpassed 1,000 career points in the process, becoming the fifth player in DeWitt history to reach the mark.

Flannery had a four-point play at the end of regulation to help force overtime. He also hit a corner 3 to force a fourth overtime. Hutson hit a 3 to force the second overtime for the Trojans.

LAKE ODESSA — Montreal Reid picked up a game-high 13 points to help guide the Vikings to a GLAC home win over Stockbridge. Jayce Cusack scored 11 points and Garrett Feighan chipped in eight points for Lakewood (7-6, 4-2). Kegan Collins and David Kluesner each notched a team-high 12 points for the Panthers (4-5, 1-4).

OLIVET — The Division 2 state-ranked Eagles jumped out to a 29-9 lead after one quarterback while rolling to a GLAC victory over Maple Valley (4-7, 0-5). All 12 players scored for Olivet (11-0, 5-0), led by Tayven Feldpausch, who hit four 3-pointers while scoring 14 points. Bo Lincoln had 12 points, Brayden Wine scored 10 and Lucas Hopkins finished with eight for the Eagles.

Zack Nartker had 16 points to pace the Vikings in their CAAC Red setback.

LESLIE — A 21-2 run in the second quarter pushed the Blackhawks to a GLAC home victory over Perry. Kaleb Cox led all scorers with 14 points, Zack Marciniak tallied 13 points and Bronson Clayton chipped in eight points for Leslie (7-2, 4-1). Ty Webb finished with a team-high six points for the Ramblers (5-7, 2-3).

Tim Sullivan and David Hall each put up a team-high nine points to lead the Pilgrims to a nonleague home win over Battle Creek Calhoun Christian (4-5). Benji Sambaer, Judah Schafer and Ethan Damesworth each tackled on eight points for Lansing Christian (6-4).