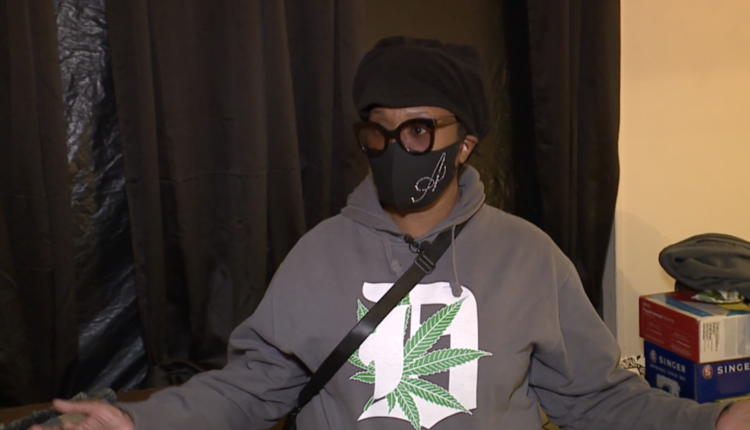 She tells 7 Action News she’s lived here for about four years and her unit hasn’t had heat for about two years.

Leonard says it’s been a big problem, but became a massive problem during the holiday weekend winter storm with temperatures that reached zero degrees.

In the text she says her apartment, “has no heat. We are freezing badly.”

The company text back that someone would be out there as soon as they could but she says no one ever came or followed up, Leonard says this has been happening for years.

“Nobody ever comes!” said Leonard. “Ohhh, I’ve been blowin’ up them phone!”

Leonard showed us the plastic she taped all around her windows to try and keep the cold and wind out. She also has two space heaters, one in her kitchen and one in the bedroom.

However, it’s not enough.

To make matters worse Leonard has also been getting rats in her unit.

“They fore-claim that they sent someone out here to fix the heat but if you touch the heat vents, they’re not even lukewarm!” said Leonard.

We called Russell Wood Apartments and Mutual Property Management ourselves to hear what they wanted to say.

Russell Wood’s phone number doesn’t give you the option to speak with anyone or leave a message.

Mutual Property Management’s first number didn’t work, no one picked up their emergency maintenance line, and their auto texting stopped texting us back.

Leonard says that she’s thought about leaving her apartment but she wants to stay around for an older woman that she helps out who lives below her and also doesn’t have heat.

“And she’s sick because she don’t got no heat in her apartment!” said Leonard.

She says she’s tired and with so much going on in her home this year, she’s not celebrating Christmas.

She says the only gift she wants is answers.

“I really want to walk away from my apartment and just live on the street, and I know it’s cold,” said Leonard.

If you or someone you know is struggling to find heat, there are three warming centers in Detroit. Click here to learn more.

A point of gratitude – BridgeDetroit