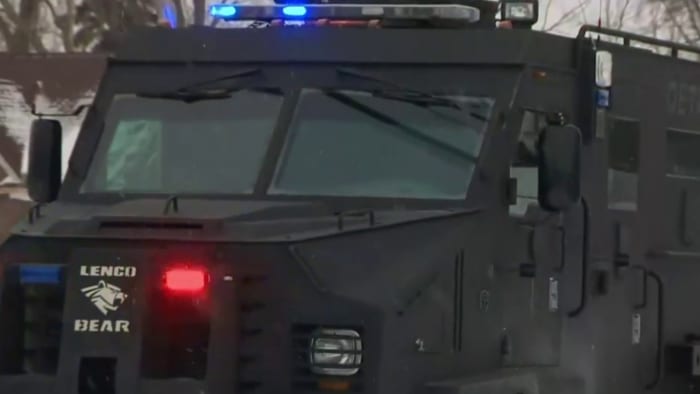 DETROIT – Detroit police are on the scene of a barricaded gunman situation on the city’s east side near East Warren Avenue and Maryland Street.

Christmas Day turned into an intense standoff by Christmas night on Detroit’s east side with a barricaded gunman situation.

Nigel Jackson, 18, says it all started when his uncle pulled a gun on him and his sister.

“It was very scary. It was alarming because I never thought my uncle would try to kill me. When he pulled out the gun, I was like wow. This is real life, it was just crazy,” Nigel explained. “He believes that he is God and satan at the same time. And he doesn’t really even like this holiday. He doesn’t want to celebrate anybody Christmas.”

It’s a race against the clock for negotiators and crisis intervention team members to diffuse the situation.

At one point, a child was still inside, but we’ve learned that’s no longer the case.

What lead to the situation is unclear at this time.

We’ve been told by another family member that the man held up inside the house has known mental health issues.

“This is their fourth or fifth time coming out here about this situation. I really hope they do something about it this time. It’s been an ongoing situation and I just want to stop to come to this situation,” said the suspect’s uncle, Bernard Jackson.

“It’s a serious thing because I could have died today. I was about to die today and I’m happy and thankful that I got out in time,” said Nigel.

“If you can hear the words of my voice, we just want to get you some help. We don’t want anyone hurt. That’s all we want. We want you to be able to enjoy Christmas and many others. Whatever the future has for you. Please come out. We just want this situation to end peacefully,” said Detroit Deputy Police Chief, Franklin Hayes.

We’re told the man has a mental illness that doesn’t allow him to legally own a handgun.

This is a developing story and will be updated as we receive more information.