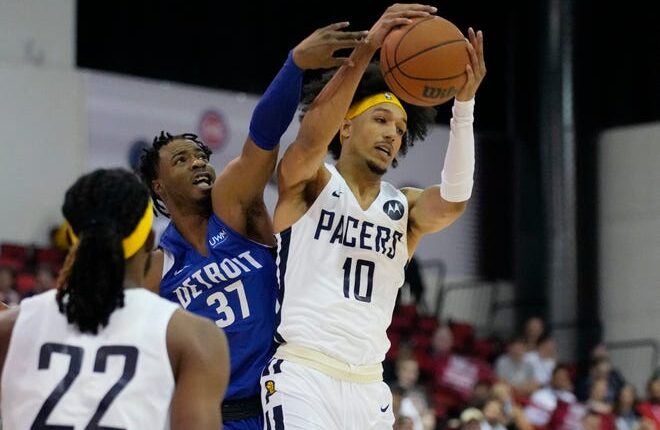 After losing two key players to injury on Saturday, the Detroit Pistons decided to shut down several other key players on their Summer League roster on Wednesday.

It may have been a factor leading to their first loss in Las Vegas.

With Jaden Ivey, Saben Lee and several other players in street clothes, the Pistons fell to the Indiana Pacers in Las Vegas, 101-87. Jalen Duren, who finished with 12 points, was the only player in Detroit’s rotation selected by the team in a first round. Two-way guard Buddy Boeheim led the roster with 18 points.

SHAWN WINDSOR:Killian Hayes is not a bust. But the clock is ticking in third season with Pistons

Detroit trailed by as many as 30 and fell to 2-1. Their final scheduled Summer League game is Thursday against the Cleveland Cavaliers at 5:30 pm Eastern.

It’s not a surprise, but the Pistons decided to rest Ivey on Tuesday after the rookie guard hurt his right ankle during the first quarter of Saturday’s game against the Washington Wizards. He landed on the foot of a defender while attempting a 3-pointer, but the early indications from Ivey are that he avoided a severe injury.

Nonetheless, it’s a disappointing outcome for fans who hoped to watch Ivey in five Summer League games, rather than just five quarters. Lee, who suffered a left ankle injury on Saturday, was in a walking boot on the bench and also missed the game after appearing in Detroit’s first two contests.

Isaiah Stewart and Isaiah Livers, who have been two of Detroit’s best players and started the first two games, so sat out on Tuesday. The Pistons started Charlie Moore, Boeheim and Motor City Cruise forward Anthony Tarke. It’s unclear, and perhaps unlikely, that Detroit’s previous starters will see any more action in Las Vegas.

Someone had to score the ball for the Pistons, who struggled on both ends of the floor while being without several of their key players. Detroit brought Boeheim in to shoot, and he did just that.

After shooting just 1-for-5 from 3 during the first two games, Boeheim knocked down three of his five 3-point attempts against the Pacers. He shot 6-for-8 overall and made all three of his free throws for an efficient 18 points.

As the Pistons suffered a blowout on NBA TV, Cade Cunningham joined the broadcast to discuss his expectations for next season. The 2021 No. 1 pick is eager to play with Ivey, and expects Detroit to play faster and tougher next season.

“It all goes back to the same things the older Detroit Pistons teams were made of, which is toughness, grit, defense, all those things we’re trying to instill and keep as our identity,” He said. “We want to play fast, we want to be exciting, we want to throw lobs and we want to play together. That’s the biggest thing that we’ve been trying to preach and work on this year, moving the ball quickly.”

Cunningham was noticeably bigger during the Pistons’ practice in Vegas last Friday, and he said he has put on 10 to 15 pounds this offseason and expects to play at 225 next season. Putting on muscle was a priority, as well as working on his game.

“Defensively, Coach (Dwane) Casey is the leader of the team and he’s really pushed me to improve defensively and take on the challenge of guarding the best guys,” he said. “That’s the culture we’re trying to make in Detroit, taking on the challenge of being able to defend one through five. This offseason I’m trying to work on my 3 ball, tighten up my handle and less turnovers. All of the scrimmaging I’m doing right now, I try to track my turnovers and assists, take care of the ball so I get more shots for my teammates.”

Ivey’s athleticism will give Detroit’s backcourt a significantly different look next season. They didn’t take the floor together in summer league, but they began the acclimation process with each other in practice. That process will extend into training camp and into the regular season.

Cunningham is excited to see how their contrasting games mesh.

“He’s gonna help my game a lot, and I’m trying to give him all the stuff that I learned in my first year so that he doesn’t have to learn through example or through gameplay,” Cunningham said. “He can just hear it from me. I can’t speak on it enough how excited I am for us, the whole team. Isaiah Stewart, Saddiq, we’re all excited for a big year. We’re all hungry. And we’ll see how it goes.”