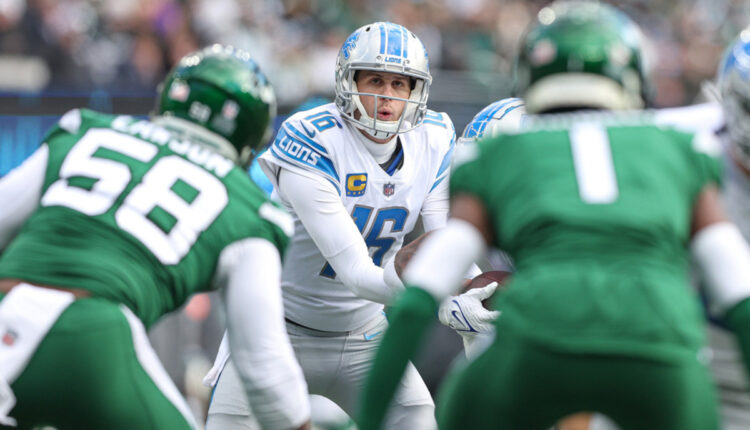 The Detroit Lions didn’t come close to playing one of their best games of the 2022 campaign on Sunday. Yet, in the end, they still found a way to beat the New York Jets for their sixth win in their last seven games.

It’s something that your father’s and grandfather’s Lions – commonly referred to as the “Same Old Lions” (SOL) – would’ve never been able to pull off.

However, these Dan Campbell-led Lions are a different breed. They’re playing a winning brand of football – something the fans in Detroit aren’t accustomed to – and putting the rest of the league on notice as a result.

The Lions’ Week 15 tilt with the Jets was just the latest example of this.

And, after Detroit failed to get points off a 10-play, 55-yard drive in the fourth quarter (Michael Badgley missed a 54-yard field-goal attempt), it set up Saleh’s team with great field position.

The Jets, with the much-maligned Zach Wilson under center, proceeded to march down the field and cap off a seven-play, 56-yard drive with a 1-yard touchdown pass to tight end CJ Uzomah. It gave New York its first lead of the game with 4:41 to play in the contest.

At the time, this had all the makings of another ugly, late-game collapse by Detroit. And, it would’ve been because of Goff & Co.’s inability to muster up a touchdown drive to close out the Jets.

This wreaked of an SOL-esque game. And, at this juncture, the Lions of yesterday would’ve relented and waved the proverbial white flag.

However, these new-and-improved Lions didn’t allow it to happen. Offensive coordinator Ben Johnson’s unit — although it didn’t look like it would happen — had one final drive in it, and it led to the offense’s only touchdown of the day.

It came on fourth-and-inches, from Detroit’s 49-yard line, with 1:49 to play. Prior to this play, Johnson had called a very vanilla game, and nothing had really clicked for the offense.

One of the few things that did, though, was utilizing Amon-Ra St. Brown. St. Brown was hard to cover for New York’s linebackers and defensive backs in the slot all game long. It led to St. Brown amazing seven receptions for 76 yards (on 10 targets).

So, on the beautifully-orchestrated, game-winning play from Johnson, everybody at MetLife Stadium thought St. Brown was going to get the ball. And, the entire attention of the Jets’ defense shifted to St. Brown, who was put in motion before the play, on the right side of the field.

It left tight end Brock Wright wide open, on the left side of the line of scrimmage, for the game-winning touchdown pass from Goff. Wright had 10.7 yards of separation from the nearest defender when the pass arrived, according to NFL Next Gen Stats.

It was a gutsy win for Campbell’s squad, in a game that past Detroit teams would’ve likely given away.

The earlier-in-the-season 1-6 version of the Lions would’ve been hard-pressed to come out on top Sunday, too.

“The guys, you know, they believe,” Campbell told reporters after the Week 15 win. “They believe, and now here we go. This is another win. But, it was a different way to have to win. We had to find a different way to win, another way to win. And, every time that happens, you just continue to grow, you start figuring things out and your confidence grows.”

In the postgame, Goff echoed the sentiment that the confidence level in the Lions locker room is on the rise.

“A lot of these close games are starting to lean more towards us and not towards them, and that hasn’t been the case around here,” Goff said. “We fully believe in each other, and just know somebody’s gonna make a play to do something right.”

With each passing week, the belief in this Lions team, among the players and the fans, continues to increase.

And, as the ’22 campaign has progressed, Detroit has proven time and time again that it isn’t the “Same Old Lions.”

It’s time to put to rest the old and tired SOL narrative, and pay this Lions team some respect.

Because as unbelievable as it may have been when the team was a measly 1-6, this season has the potential to be a special one for Detroit (even possibly beyond the regular season).

A Montana Addiction Clinic Wants to Motivate People With Rewards. Then Came a Medicaid Fraud Probe.