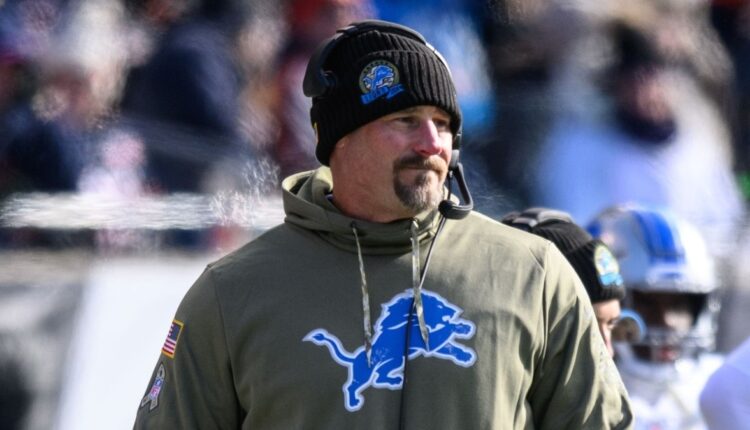 When key plays had to be made, it was the Detroit Lions who made them in Sunday’s NFC North showdown with the Chicago Bears.

In the Week 10 contest, the Lions shook off the late-game ugliness that has plagued them. After struggling to win close games, Detroit head coach Dan Campbell made the right moves at the right times to lead the team to its second straight win.

Campbell and company have generated momentum now, as the win bumps the team ahead of the Bears in the NFC North standings.

Without further ado, here are the postgame grades for each position group.

Jared Goff wasn’t spectacular by any means, but he shined in the biggest moments of the win. With Detroit trailing, 24-10, he led a touchdown drive that ultimately helped swing the momentum of the game.

On that drive, he was aided by an interception being negated as a result of an illegal hands to the face penalty. After the penalty, running back D’Andre Swift scored from nine yards out on the very next play.

Later, with Detroit trailing 30-24, Goff led a composed drive that wound up being the game-winner. He connected with Caliph Raymond for 20 yards, Amon-Ra St. Brown for seven, Tom Kennedy for 44 and St. Brown again for 13 to bring Detroit to the 1-yard-line.

The four completions on the game-winning 91 yard drive totaled 84 yards, bringing his game total to 236. He connected with tight end Brock Wright for a short touchdown earlier in the game.

He also scrambled once for 10 yards, which wound up being a 25-yard play after he drew an unsportsmanlike conduct penalty.

Aside from the penalty-negated pick, Detroit’s signal caller was composed and mistake-free. As a result, the Lions were victorious in an important game.

Detroit is still dealing with a very limited version of Swift, so it leaned on Jamaal Williams to do the majority of the work. Williams scored the game winner late but finished with just 59 yards on 16 carries.

Swift scored a nine-yard touchdown in the fourth quarter but finished with just six total rushing yards on six carries. Since returning from injury in Week 7, he has yet to run for more than 10 yards in a game.

Jackson and Swift each contributed in the passing game, as Jackson caught two passes for 14 yards while Swift had one catch for six yards.

Fullback Jason Cabinda made his season debut Sunday after missing the first eight games with an injury. He did not record any stats and was used sparingly as a run blocker. 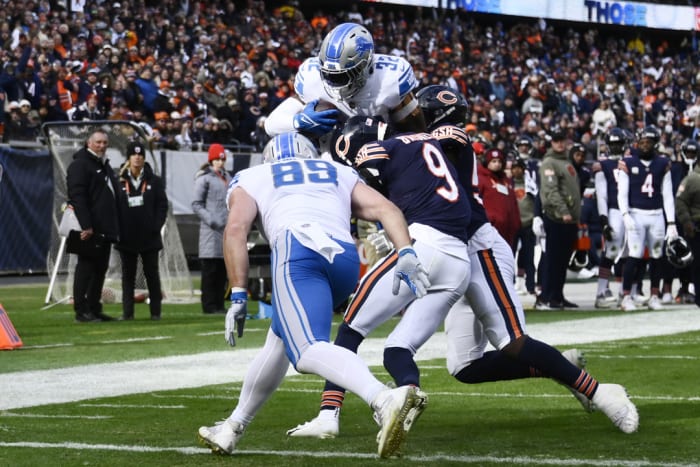 Brock Wright’s only catch was his first touchdown of the season. It came on a well-designed fourth-and-goal play action play, as Wright sold a blocking fake then burst free across the middle of the field.

Rookie James Mitchell had a catch for four yards but performed well as a run-blocker. Meanwhile, Shane Zylstra dropped his only target on a third-down.

Though inexperienced, Detroit’s tight ends have stepped up admirably in key moments since the trade of TJ Hockenson. The targets are limited, but each of Goff’s last three scoring throws have been to tight ends.

Just three wideouts caught passes Sunday as the Lions continue to deal with injuries at the position. Amon-Ra St. Brown notched a career-high 119 receiving yards on 10 catches as the Lions were clearly trying to get him involved early.

Caliph Raymond and Tom Kennedy each also made their presence felt. Raymond had three catches for 47 yards including a key 20-yard catch-and-run on the game-winning drive, while Kennedy had a 44-yard reception on the same drive.

Detroit was once again without starting wideouts DJ Chark, who remains on injured reserve, and Josh Reynolds. However, the likes of Kennedy and Raymond making plays in pivotal junctures has offset the losses.

Stanley Berryhill and Trinity Benson were Detroit’s other two active receivers. Benson was flagged for offensive pass interference on a screen pass attempt. According to Dave Birkett of the Detroit Free Press, Benson was on crutches following the win.

Detroit’s offensive line struggled to open run lanes against the Bears defense as evidenced by the team’s 3.1 yard average on the ground.

Goff was sacked twice for a total of eight yards, both by linebacker Jack Sanborn on well-timed stunts. Yet, the unit was penalty-free and limited the mental mistakes that had doomed them in the past.

Rookie Aidan Hutchinson had a big day with eight tackles and a sack. He showed glimpses throughout of the skill he possesses as a rusher, finding his way into the backfield in pursuit of Justin Fields.

Yet, it wasn’t a great day for the defensive line against Chicago’s run attack. Fields rushed for 147 yards and the team totaled 258 yards on the ground.

Fields had two touchdown runs, including a 67-yard dash that came directly after Jeff Okudah’s game-tying pick-six. The defensive line struggled early at the mesh point of Chicago’s run-pass option scheme, as fields and his running backs were successful getting to the second level.

Though the struggles were apparent, Detroit was able to notch two sacks on Chicago’s final possession. Hutchinson and Julian Okwara each got to fields, with Okwara’s sack serving as the game winner and his second of the day.

Rookie Malcolm Rodriguez missed the game for the first time in his career, leaving the starting duties to Alex Anzalone and Derrick Barnes. Anzalone finished with a game-high 10 tackles, while Barnes had two.

Chris Board also had two tackles in an increased role.

The struggles that the defensive line had felt throughout the defense, as the linebackers struggled to corral the shifty fields and his running counterparts. Tight end Cole Kmet also gave the unit problems with four catches, 74 yards and two scores.

Rookie Kerby Joseph took a step back from his superb performance in recent weeks. He got mixed up with counterpart CJ Moore on what turned into a long touchdown pass from Fields to Kmet.

The secondary had a difficult time getting run fits on fields, as the quarterback was able to skate free from broken tackles. This was evident on his 67-yard score, as Mike Hughes made the wrong read and got turned around before Fields broke free.

Michael Badgley hit a 25-yard field goal and all four of his extra points, the last of which was the difference in the game. Punter Jack Fox averaged 46 yards per punt including a booming 59-yarder.

Justin Jackson notched a 39-yard return on Detroit’s only return of the game. Stanley Berryhill made an impressive open field tackle covering a punt.

Campbell broke character early in the game, electing to take the points rather than go-for-it on a fourth-and-four from Chicago’s seven. However, he rolled the dice on fourth-and-goal from Chicago’s two on the next series, which resulted in a score.

Offensive coordinator Ben Johnson schemed a solid game plan, with his unique usage of St. Brown at the forefront. Though the Lions struggled to run the ball, Johnson put the unit in good spots throughout the game.

Though the effort wasn’t perfect, Detroit showed signs of turning a corner with its ability to close the game out. The situations at the end of the game were reminiscent of past close losses, but Campbell and company were able to right the ship and secure the win over Chicago.