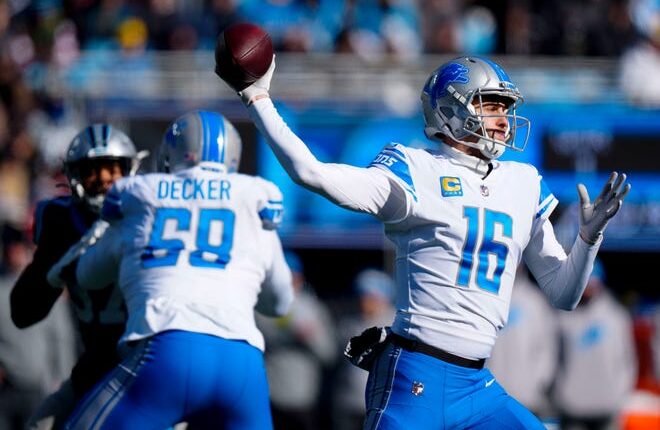 -Q4 10:33: Lions get deep into Panthers territory but turn it over downs.

-Q3 3:09: Goff finds Shane Zylstra for their second TD connection of the day. 2 pt. conversion failed. The Lions are on the comeback trail. 31-13.

-Q3 6:47: The…Panthers? Went three and out? weird Didn’t think they were allowed to do that.

-Q3 8:05: This blizzard continues to roar. We’ve gotten well over a foot here on the west side of the state but the winds have died down some. Oh, and the Lions went three and out again.

-Q3 12:46: Goff is sacked on third down and the Lions have to punt. What’s everyone having for Christmas Eve dinner?

Lions get the ball to start the second half as they try to claw their way back into this.

Panthers hit a 37-yard FG at the half.

-Q2 0:59: The Lions go three and out again. Find something else to do this afternoon. It’s Christmas Eve, spend some time with your family.

-Q2 2:08: D’Onta Foreman literally just walked through the Lions defense and into the end zone. This is pathetic. It’s 21-7.

-Q2 8:34: Goff has two passes tipped and incomplete. The Lions go three and out. Look out folks. This could get ugly.

Goff turns it over

-Q2 14:17: Jared Goff drops the snap and the Panthers recover. The Lions had a nice drive going too. That’s their first turnover in a while.

End of first quarter: Lions and Panthers tied at 7

Lions are driving, though.

-Q1 6:14: Lions’ defense gets off the field at around midfield. Much better.

-Q1 8:38: The Lions’ offense responds with a touchdown of its own. Goff to Shane Zylstra. Nice answer. We’re tied at 7.

-Q1 11:57: Well that was about as bad a start as you could imagine. The Lions’ run defense, which has been so good as of late, allowed the Panthers to run the ball down their throats, including two 30+ yard runs from Chubba Hubbard. Lions down 7-0 early.

Lions win the toss and defer. Panthers up first on offense. Here we go.

The Lions will look to have a winning record for the first time since the 2019 season as they take on the Carolina Panthers on Christmas Eve.

The Panthers will start Sam Darnold at quarterback, meaning the Lions will have faced to back-to-back Jets’ draft busts. Carolina also runs the ball a ton, which is good news for a Lions’ defense that has been stout against the run in recent weeks.

The Lions just need to keep on winning. If they do that, they should be fine.