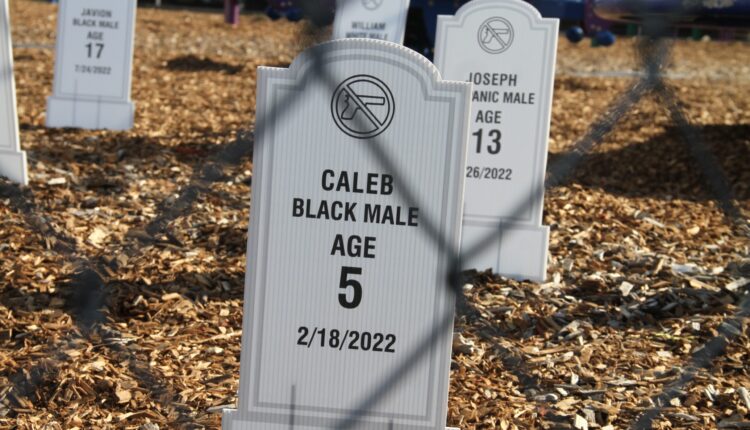 More than 200 replica tombstones – one for every Detroiter killed by gunfire this year – were placed in the grass outside of Detroit Edison Public School Academy on Thursday, greeting attendees of Police Chief James White’s first town hall meeting.

The display, including a dozen filling a playground to acknowledge this year’s slain children, set the table for the message of White’s three-hour forum: gun violence has taken too many people from this city.

“I will never become desensitized to an innocent person or a child losing their lives in our city when I know there’s so much more we can do to prevent it,” White said.

The town hall was convened to discuss community-based solutions to gun violence, an issue plaguing Detroit for decades. Detroit has seen nine mass shootings this year alone and heightened frustrations among residents left some fearful of public spaces or leaving their homes. The meeting also addressed the need for more officers in the department and a greater understanding of how mental health crises play a role in Detroit’s crime problems.

So far in 2022, there were 218 fatal shootings in Detroit. More than 91% of the victims of those shootings were Black. Those totals include 12 children ages 17 or younger.

Among them, Saniyah Pugh, an 11-year-old girl struck by a stray bullet on the city’s east side in June. Another is 36-year-old Princess Dobbs, a mother of three, who was fatally shot inside her home on the city’s west side in May.

Deputy Mayor Todd Bettison, who spent 27 years in the Detroit Police Department, said he’s fed up with the violence and urged the public to help by becoming part of the solution.

“We’re all very smart, intelligent individuals but we have to work together and get serious,” said Bettison, noting Detroit has to work harder to “bring relief to our babies.”

Pastors, city leaders, federal and county law enforcers on the stage and in the crowd Thursday shared Bettison’s sentiments.

“We’re tired of being afraid to walk out that door and not knowing if we’re going to come back in,” said Alvin Stokes, a resident and president of the Citywide Citizens Police Community Relations council.

Thursday night’s talk on gun violence solutions centered largely on the city’s controversial proposal to use $7 million in COVID-19 relief aid to expand Detroit’s use of ShotSpotter, a gunshot detection system that White has championed alongside Mayor Mike Duggan as a key tool to help solve gun crimes.

Residents, activists and some members of Detroit’s City Council have opposed the proposal, questioning the value and accuracy of the technology and whether the funding would be better spent elsewhere. The council postponed action on the contract this week amid criticism and concerns. It is scheduled to take the contract up for a vote on Sept. 27.

White said the debate over ShotSpotter is distracting from what really matters; stopping gun violence.

“As we’re arguing about things and protecting perpetrators, we need to think about these kids and these victims,” said White, urging the public to hold DPD accountable “if the technology is misused.”

Some Detroiters wore white as a symbol of peace during a town hall focused on gun violence hosted by Detroit Police Chief James White on Thursday, Sept. 22, 2022. (BridgeDetroit Photo by Malachi Barrett)

Edythe Ford, a longtime Detroiter at the town hall, said “there is just so much shooting in the city” and she’s all for the ShotSpotter expansion.

“If we have it in more areas, I feel like it’ll make things safer,” she said, “so I’m gonna make sure me and some of my neighbors are tuned into the (City Council) meeting next week.”

Ford said she was encouraged by what she heard from police and community members at the meeting.

“But next time, I would like to see more young people here,” Ford added. “I feel like older people like me have some good ideas, but it’s the younger folks, the 20-somethings and the teenagers who really need to be leading these discussions. Even if those young people have a bad feeling about the police.”

Osborne High School student Nyzer Thompson, 16, was the youngest person to speak during the event. He said afterward that he plans to share what he heard with other young Detroiters.

“I liked hearing that there are things we can do about crime and we can speak up,” he told BridgeDetroit. “I want to make sure my friends know we can do something about the violence and stuff we’re seeing.”

Besides White and Bettison, there were 16 speakers on the panel Thursday, including U.S. Attorney of the Eastern District of Michigan Dawn Ison, City Council President Mary Sheffield, Detroit Board of Police Commissioners Chairman Bryan Ferguson and Third Circuit Court Judge Timothy Kenny.

Several members of the audience and some on the panel wore white to support the Code 22 day of peace, which falls on the 22nd day of every month in Detroit as a way to bring awareness to efforts to stop gun violence.

Glenda McGadney, who runs a block club in Detroit’s Russell Woods neighborhood, said the meeting was “a good starting point.”

“I just hope that those who are on the panel can continue with their discussions and have more solutions to the issues that we’re facing in the city with the violent crime,” McGadney said.

authored by
First published at https%3A%2F%2Fwww.bridgedetroit.com%2Fdetroit-leaders-urge-action-on-gun-violence-to-bring-relief-to-our-babies%2F