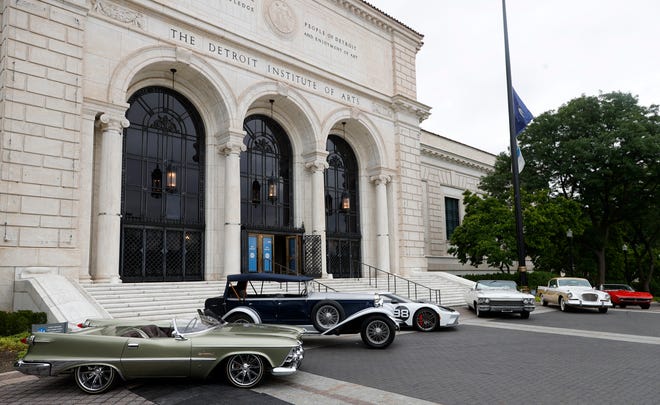 The Detroit Concours d’Elegance will feature more than 120 classic cars, but also local car clubs, hilarious lemons and more when it fills the grounds and streets near the Detroit Institute of Art Sept. 16-18.

Hands-on events will include a chance for children to learn how to judge one of the classics on hand. Visitors can also sign up to drive a classic on Woodward Avenue, a road that looms as large in automotive history as the vehicles on display.

“The missing piece of the show was the city of Detroit,” said McKeel Hagerty, CEO of Hagerty, the Traverse City-based lifestyle and classic car and boat insurance company and Concours chair. The Concours, which dates to 1979, hasn’t The Hagerty company, which also runs the Greenwich and Amelia Island concours, bought the show in 2021. was held in the city of Detroit before.

“Woodward Avenue — the road itself is like a holy place,” Hagerty said, adding it is the site of everything from the world’s first mile of concrete paved road and America’s first three-color traffic light to teenagers cruising in customized cars and engineers racing for bragging rights.

Concours events are planned for:

The good the bad and the really ugly

The official show takes place Sunday, Sept. 18, but the preceding day will feature gatherings by local car clubs in Comerica Park parking lots, a “Concours d’Lemons” show of oddball, decrepit and bizarre vehicles — Motto: “Where everybody knows it’s lame.” Nearby, the RADwood show will celebrate cars fashion and music from the ’80s and ’90s -— some parts reverently, others with tongue firmly in cheek.

Retired GM design chief Ed Welburn will be honored at a dinner Saturday, Sept. 17, in the College for Creative Studies’ Taubman Center — the original home of the GM Design Center.

Detroit-based automakers also will display about 20 vehicles of historic or current interest.

More information on the weekend’s events and tickets are available at https://detroitconcours.com.

The cars will be displayed on the DIA lawns and on Kirby and Farnsworth streets immediately north and south of the art museum.

Organizers promise that more than 1,000 parking spaces will be available within a few blocks. The QLINE streetcar provides easy access from downtown or the New Center neighborhood.

The Concours shares its weekend with the North American International Auto Show in and around the riverfront Huntington Place convention center.