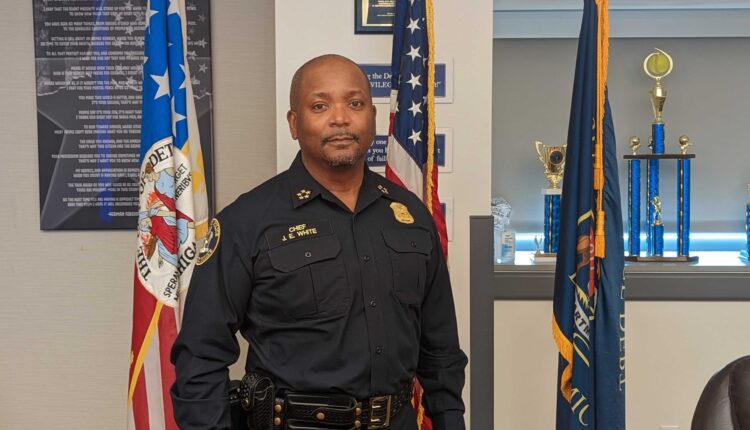 There’s a significant uptick in “violent” mental health calls in Detroit and the city’s top law enforcer said he’s losing sleep over it.

Between barricaded gunman situations and officers encountering suicidal residents, the Detroit Police Department has been responding to hundreds of mental health-related calls each week.

“This literally keeps me up at night,” Detroit Police Chief James White told BridgeDetroit during a recent sit-down interview at Detroit Public Safety Headquarters. “And, I recognize now that we as the police have to be better prepared, we have to take this on. This isn’t something that we should have to take on … but it’s landing smack dab in our laps and we have to be in a position where we provide these services.”

The chief said that the department will soon be rolling out a “comprehensive strategy” to help address the increase. Part of it, he said, aims to ensure crisis trained officers are paired more frequently with mental health professionals when responding to those calls.

DPD data from October shows the department received 452 calls for mental health-related issues – situations with armed and violent individuals, suicide attempts and drug overdoes – between Oct. 24 and Oct. 30. DPD had 399 mental health calls the prior week.

By the end of October 2021, the department had received 17,775 mental health-related calls. This year, there have been 19,507 of those calls over the same period.

“I don’t believe our police need to spend their time or resources responding to calls that a peer support specialist, social worker or mental health care provider should be responding to,” Santiago-Romero said during Wednesday’s council meeting.

Santiago-Romero said sending officers to handle those types of calls can be problematic.

“I just think that we need to have a better operating system of how we respond to these calls so officers are able to focus on violent crime and we don’t have officers with folks that are dealing with a mental health crisis,” Santiago-Romero told BridgeDetroit on Thursday. “Oftentimes, unfortunately, you see the terrible results from those calls or just that residents aren’t receiving the care that they really need.”

In October, a Detroit police officer fatally shot 20-year-old Porter Burks, a Detroit resident diagnosed with schizophrenia who was experiencing a mental health crisis at the time of his death. Because Burks had a knife when the call was made, police would responded regardless of whether Detroit had a program with non-uniformed mental health professionals, Santiago-Romero said.

“In the meantime, we need our state legislators to see the problems we are seeing and to act to provide the resources needed to fund long-term mental health treatment centers in our city,” White wrote. “Had these centers existed, this tragic incident may have been avoided.”

White, a licensed mental health therapist, was appointed as Detroit’s police chief in June 2021 after briefly leading the Michigan Department of Civil Rights. A former deputy chief for DPD and a long-time officer of the department, White said the mental health crisis isn’t isolated to the city. It’s a “concerning” trend that departments of all sizes across the country are seeing, he said.

Detroit officers receive 40 hours of Crisis Intervention Team (CIT) training on top of 16 hours of mental health training while in the 26-week police academy. The combined 56 hours of mental health training, White noted, are “significantly higher” than what the Michigan Commission of Law Enforcement Standards (MCOLES) requires. In 2021, the department budgeted $241,786 for two years of the CIT program, but even more needs to be done, White said.

Although it has been done exclusively in barricaded situations, White said he’d now like to send CIT trained officers and mental health professionals who aren’t sworn officers to other emergency runs that might be tied to a mental health crisis.

“We’re talking through all that using our CodeRED alert system,” White said. The city has two types of emergency alerts that send emails or text messages to residents via a mobile app, Detroit Alerts 365 and CodeRed, which issues alerts based on proximity.

“We’ve got a very comprehensive strategy that’s going to be rolled out soon,” he said.

QuanTez Pressley, an at-large member of the city’s civilian board with oversight of the Detroit Police Department, said the volume of mental health calls is “unfortunately, not surprising,” given the lack of mental health resources in Detroit.

But the October numbers, he said, “give us a clear focus,” on what can and should be done to relieve some of the work that police officers have to do “in areas that are really beyond their work responsibilities,” he added.

“Coming out of a global pandemic, recognizing the lack of mental health services that are available in our community, oftentimes, the only resources that individuals have to manage and monitor mental health episodes is law enforcement,” said Pressley, lead pastor at the Third New Hope Baptist Church on the city’s west side.

Pressley said that DWIHN is scheduled to present to the board in December on mental health resources needed in the city. The hope, he said, is to work more closely with the agency and others better qualified in mental health response.

White said the COVID-19 pandemic taught the country that its crisis response must continually evolve. The virus isn’t going anywhere, he said, and communities have found ways to live with it. He believes the same model can be applied to mental health.

“First, let’s stabilize it, let’s get enough facilities to treat people, let’s take the stigma away from mental health, because everyone is dealing with something. It’s not a sign of weakness to admit you need help. Actually, it’s a sign of strength,” he said. “Mental health impacts all of us. It sees no economic barriers. It has no geographical barriers. If those services are available, people will seek them out.”

White said that DWIHN is working to add 35 more beds at its facility on Milwaukee Street and the chief said he’s also anticipating more support from the state.

Police Commissioner Ricardo Moore, who represents District 7, said the city has been lacking in mental health care facilities since the late 1990s, when then-Governor John Engler closed 16 of the state’s mental health hospitals.

“Since then,” Moore argued in a statement to BridgeDetroit, “mental health has been criminalized by state-elected leadership through acts of omission. The State of Michigan and county sheriffs are locking up people for criminal activities with very limited dedicated resources for alcoholism and mental health.

“Families with money can get their loved ones help, other families call 911,” Moore said.

Moore and other members of the Board of Police Commissioners argue that Detroit needs help from the state to address the mental health challenges on its hands.

The Michigan Department of Health and Human Services (MDHHS) is aware of the systemic challenges that have prevented people across the state from receiving the mental health care they need.

“We’re actively working to address those gaps and barriers,” MDHHS spokesperson Chelsea Wuth said, “through building upon our existing network of services and resources, strengthening our workforce, and providing support and infrastructure for families to have easy, affordable access and making sure there are mental health care options nearby for all residents.”

In one recent case, DPD responded to a mental health call and transported a man to the hospital for attempted suicide. Twenty-four hours later, the man was successful in his attempt.

“Those types of cases, they are heartbreaking, they are tragic,” White said. “There has to be more hospitals, there has to be inpatient treatment centers, and it can’t simply drop people off, get them stabilized and release them.

“I am happy to see and hear so much talk about mental health,” he said, “but I’m getting to the point now where I want to move beyond talk and see more action toward mental health.”

Detroit Police Commissioner Willie Burton, who represents District 5, said Detroiters are “in pain” and the city needs social workers and psychologists staffed at each police precinct.

“We need one of each for each precinct, for each shift,” he said. “That’s what’s needed right now. In order to fix this growing problem that we have … the officers need support as well.”

Malachi Barrett contributed to this report.

authored by
First published at https%3A%2F%2Fwww.bridgedetroit.com%2Fdetroit-chief-wants-more-mental-health-pros-for-crisis-calls%2F