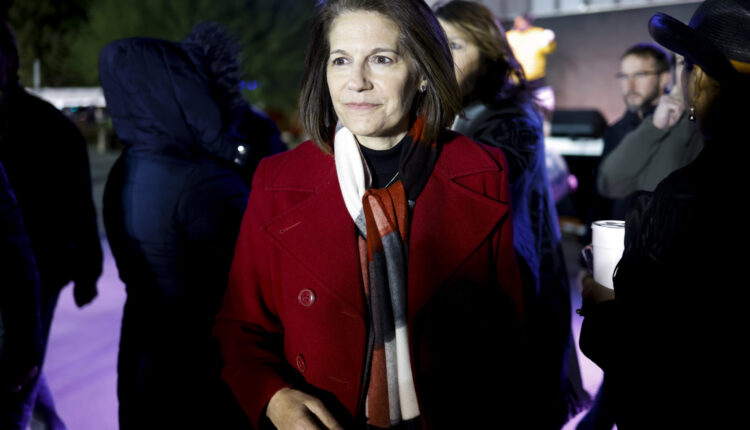 Democratic U.S. Sen. Catherine Cortez Masto of Nevada will win reelection, according to Associated Press projections late Saturday, ensuring Democrats will remain in the majority next year no matter what happens in a runoff election in Georgia next month.

After days of vote counting, U.S. Sens. Mark Kelly of Arizona and Cortez Masto were both projected to win their races and return to Washington next year.

The Associated Press called the Arizona race late Friday and the Nevada race late Saturday after a tranche of ballots from Clark County, the state’s most populous, were reported.

Cortez Masto won by a narrower margin, leading by about one-half a percentage point Saturday night, over former Nevada Attorney General Adam Laxalt. She ran up large margins in the state’s urban center of Clark County, which was enough to offset Laxalt’s strength in rural areas.

The victories will bring Democrats’ total to at least 50 senators. With Vice President Kamala Harris’ tie-breaking vote, that is enough to ensure the party will maintain control of the chamber.

Two other Senate races are still uncalled, but one, in Alaska, is between two Republicans.

The other, a runoff election in Georgia between Democratic U.S. Sen. Raphael Warnock and Republican former football star Herschel Walker on Dec. 6, will now not decide control of the Senate, but whether Democrats will have a two-seat advantage or control an evenly divided chamber as they have for the last two years.

“Voters across the country have delivered a resounding endorsement of Democrats’ Senate majority,” U.S. Sen. Gary Peters, a Michigan Democrat who leads the caucus’ campaign arm, said in a Saturday statement.

So far, every incumbent who ran has won reelection. Warnock could continue that trend.

The only seat to change parties so far is in Pennsylvania, where Democratic Lieutenant Gov. John Fetterman defeated Dr. Mehmet Oz in a contest to succeed retiring Republican Pat Toomey.

In the days since Election Day, national Republicans have bickered over how much candidate quality cost them in an election cycle that otherwise may have favored them.

President Donald Trump favored bombastic candidates willing to endorse his false claims that the 2020 presidential election was stolen from him.

That resulted in untested candidates winning GOP Senate primaries in Arizona, Georgia, Pennsylvania, New Hampshire and Ohio. Of that group, three lost outright and Georgia is still to be decided. Only J.D. Vance in Ohio won outright, in an open seat, though he far underperformed the Republican establishment-favored Gov. Mike DeWine.

Control of the U.S. House is still yet to be determined, though Republicans are still expected to gain a narrow majority in that chamber.

As of Saturday morning, Republicans were projected by The Associated Press to win 211 races, with Democrats safely ahead in 203. A party must win 218 seats for a majority in the House.