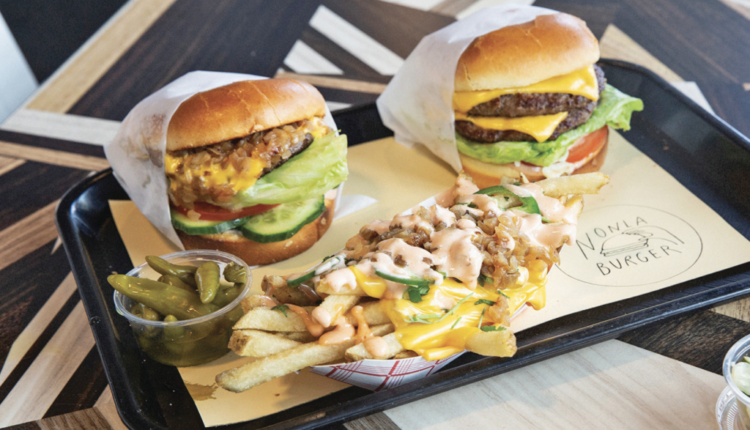 “They wanted to bring a SoCal vibe and have a Vietnamese twist to a burger,” Natashia said. “They started to put the idea to do this together, Kyle came home to me and I was ready to jump at it.”

The menu is simple, with the standard offering being NB #1, or a double cheese burger meal. There’s also several chicken sandwiches, fries and a salad. The sandwiches can be made “Nonla Way,” which adds jalapenos, grilled onions, cilantro and cucumber, evoking the Vietnamese Banh mi sandwich. Each day, there is also a shake of the day, hand stirred to order.

“We pride ourselves on not having a ton of options but doing them really well,” Natashia said.

Photos of the burgers suggest influence from the West Coast In-and-Out Burger chain, and while Natashia said the love of the burger joint is instilled in their California upbringing, she insists there is a distinct difference.

The restaurants south of Grand Rapids are generally smaller and are a dine and move on experience. The Bridge Street location will be different and more in line with the multitude of gathering spots in the west side entertainment district.

For starters, this location will have a liquor license. It’s drinks menu won’t be as extensive as many of the other bars and restaurants in the vicinity, but Natashia said it is easy to see the restaurant being overlooked without one. Like the food menu, the drinks menu will be smaller with a few specialty cocktails and a house wine and
a beer or two on draft. There could be a diner like take on boozy milkshakes, orange Juliuses and root beer floats.

There is also the potential for table games, to help entice diners to stay and hang out, something the other three locations do not have the ability to offer.

“We want customers to hang out and enjoy the experience,” Natashia said. “Our current locations are grab and go and they’re great business, we see a great success in that. But in Grand Rapids, we’ll be more of an experience.”

The fairly quick ramp up to four restaurants has mostly been to reach the areas of the two couples live. There could be a second, east side Grand Rapids location in the sights, but beyond that is a tough sell for expansion.

“We’re not trying to be the next McDonald’s,” she said. “We’re family-friend business, we are in the stores everyday. We love that and we want to run them well.”