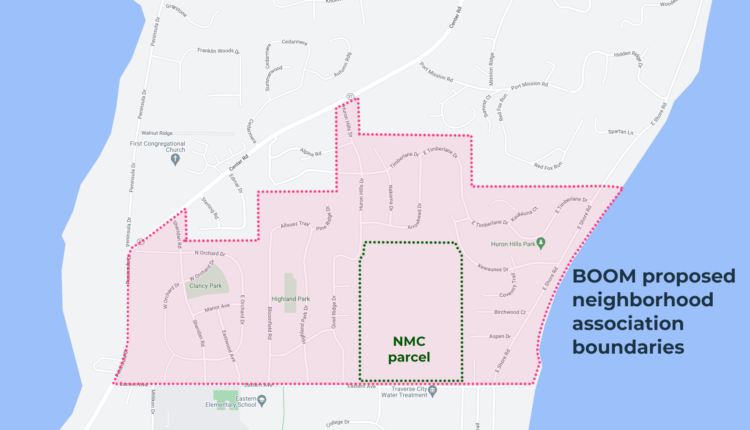 Concerns about traffic, pedestrian safety, and other issues are bringing residents at the base of Old Mission Peninsula together in an effort to form BOOM (Base of Old Mission), Traverse City’s ninth neighborhood association.

Nikki VanderKolk-Rine is one of the individuals behind the fledgling association; since moving to the neighborhood in 2020, she became concerned as she witnessed speeding, careless driving, and accidents in the neighborhoods north of Eastern Avenue, across from Traverse City Central High School, Northwestern Michigan College, and Eastern Elementary.

Of special concern to VanderKolk-Rine is traffic on Quail Ridge Drive. It becomes Huron Hills Drive, which then connects to M-37/Center Road – creating a cut-through from Eastern Avenue to the rest of Old Mission Peninsula.

“I have witnessed three car accidents from my living room window because of negligent drivers on the S-curve I live on,” she says. “In two of those accidents, had there been pedestrians, they might have been seriously injured or killed.”

In August, VanderKolk-Rine canvassed Quail Ridge and Huron Hills, and collected more than 30 signatures on a letter asking the City of Traverse City to implement traffic calming measures. “Everyone who answered the door shared the same concern about speeding,” says VanderKolk-Rine.

The letter cited limited visibility for pedestrians and vehicles on the sharp, hilly S-curve where Quail Ridge meets Huron Hills. The neighborhood has no sidewalks, and is home to a number of students who walk to Eastern Elementary, Central High, and bus stops for East Middle School. Several school teams and other groups also use the neighborhood streets for running and cycling.

In the process of petitioning for traffic calming, momentum began to build behind forming a neighborhood association to create a venue to connect with City government. “When you create a neighborhood association, the City assigns you a liaison. So you have that direct, open communication,” says VanderKolk-Rine. “And we want to have a seat at the table when the City is working on things like the master plan.”

On December 1, some 30 residents met at Eastern Elementary to take the steps required to form the association, voting to approve the name Base of Old Mission (BOOM), proposed boundaries, and by-laws. Meeting attendees also discussed standing water at the bottom of Quail Ridge and Highland Park, speeding on Eastern Avenue, streetlights, and the possible development of NMC’s 55-acre parcel, which about several homes.

Neighborhood leaders have submitted meeting documentation to the City, and are hopeful that BOOM will soon be officially recognized and assigned a staff liaison. They plan to hold a meeting in March to elect officers and form committees; and have set up a Facebook group.

“If this does come to fruition, we’re hoping that we will have that direct link to the City to give feedback and work together.” says VanderKolk-Rine. “Our end goal is to work with the City in a timely, productive, positive way.”

As for VanderKolk-Rine’s petition for traffic calming measures (which preceded and was not brought to the City by BOOM), the volume of traffic on Quail Ridge was found to be shy of the amount needed to qualify for consideration.