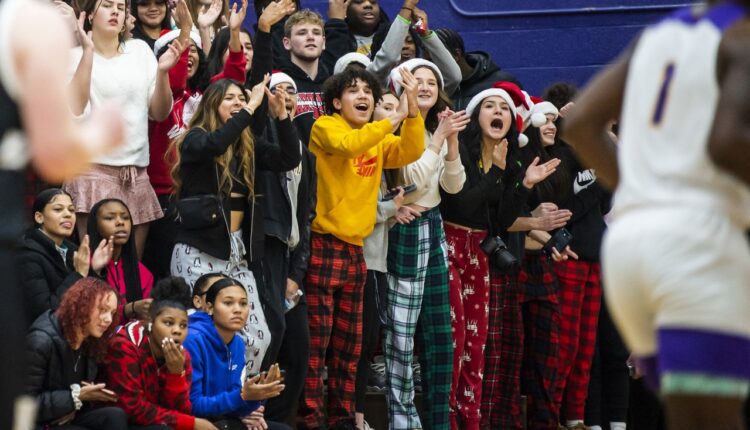 BAY CITY, MI – A look at the high school sports scene in the Bay City area for Dec. 20, 2022. Area coaches are asked to submit results, highlights and comments the night of each event by emailing [email protected]

For the second game in a row, Carter Patrick was the difference-maker in the final moments, lifting Cass City to a 55-54 victory over Saginaw Nouvel.

Patrick sank both ends of a 1-and-1 free-throw opportunity with 1.8 seconds on the clock as the Red Hawks turned a one-point deficit into a one-point win. Patrick hit a late 3-pointer to beat Millington one week ago.

Bay City Central came out of the locker room at halftime ready to rock.

Knotted with Ogemaw Heights at 30-30 at the midway point, the Wolves went wild for a 71-53 victory.

Carmello Hurston scored all 11 of his points in a head-spinning, three-minute stretch to ignite Central (3-2), which opened the second half with a 25-6 scoring spree. Cameron Washington scored 24 points in the win and Parker Smith added 14.

Playing without last year’s area scoring leader Hudson Hodgins due to injury, Ogemaw roared to a 22-19 lead after one quarterback. Ryland McDaniels led the Falcons with 13 points and Kooper Klann added seven.

Central added another win to its ledger when it was awarded a forfeit by Midland Dow, which used an ineligible player for their Dec. 7 matchup.

On the doorstep of a much-needed victory, the lead and the game slipped away from Bay City Central.

Traverse City West rallied for a 47-41 victory, sending the Wolves to an 0-7 start on the season.

Central led 32-27 entering the final stanza only to be outscored 19-9 down the stretch. 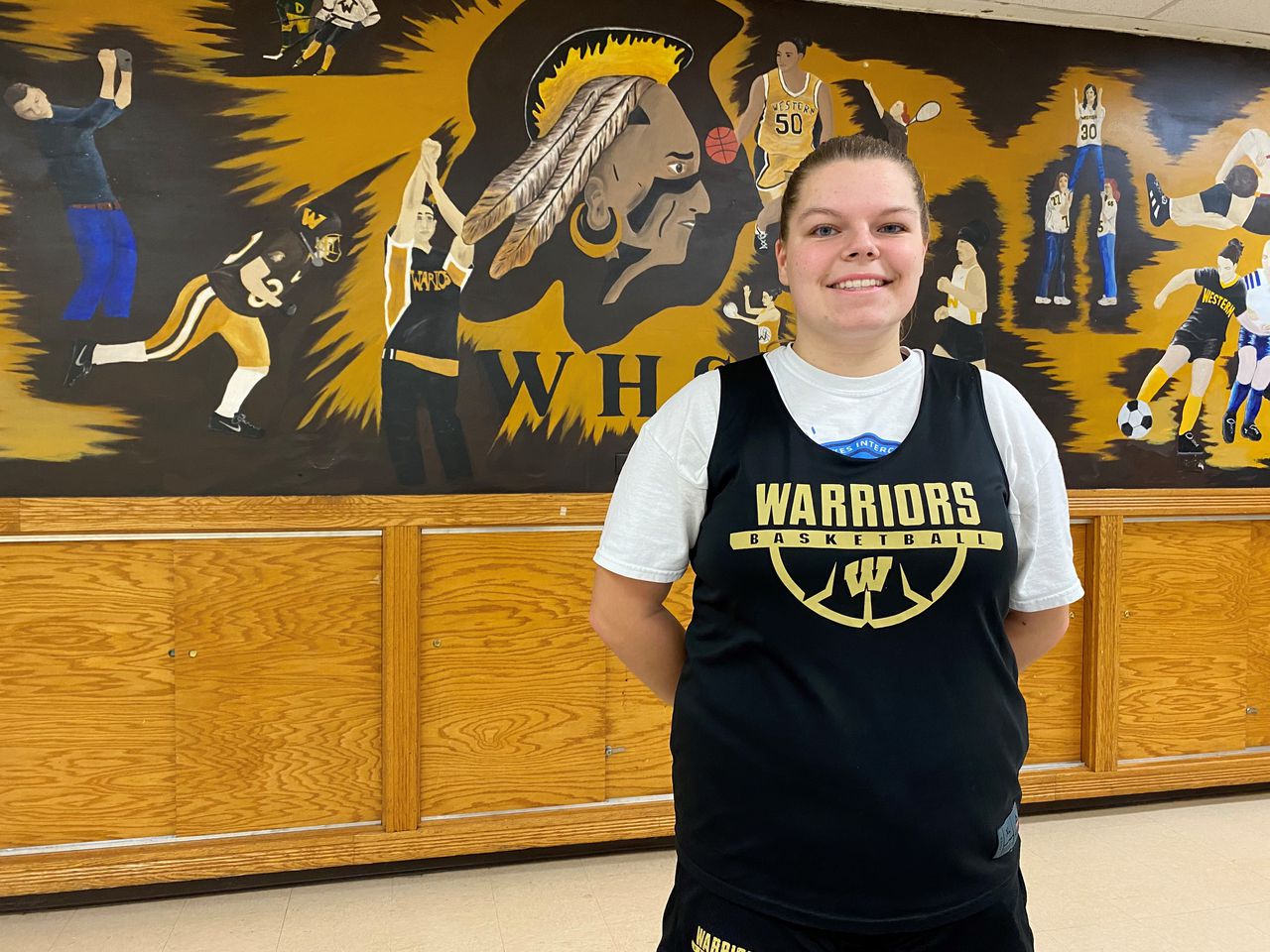 The Warriors maintained a single-digit lead into the fourth quarter then pulled away for a 52-33 victory in the Bay County clash.

The win was the fourth in a row for Western (6-1), which finished the game on a 15-5 run. Chloe Wittbrodt led the offense with 13 points while Olivia Jatczak came up with a crucial 10-point, nine-rebound effort and Breanna David notched 10 points and six boards. 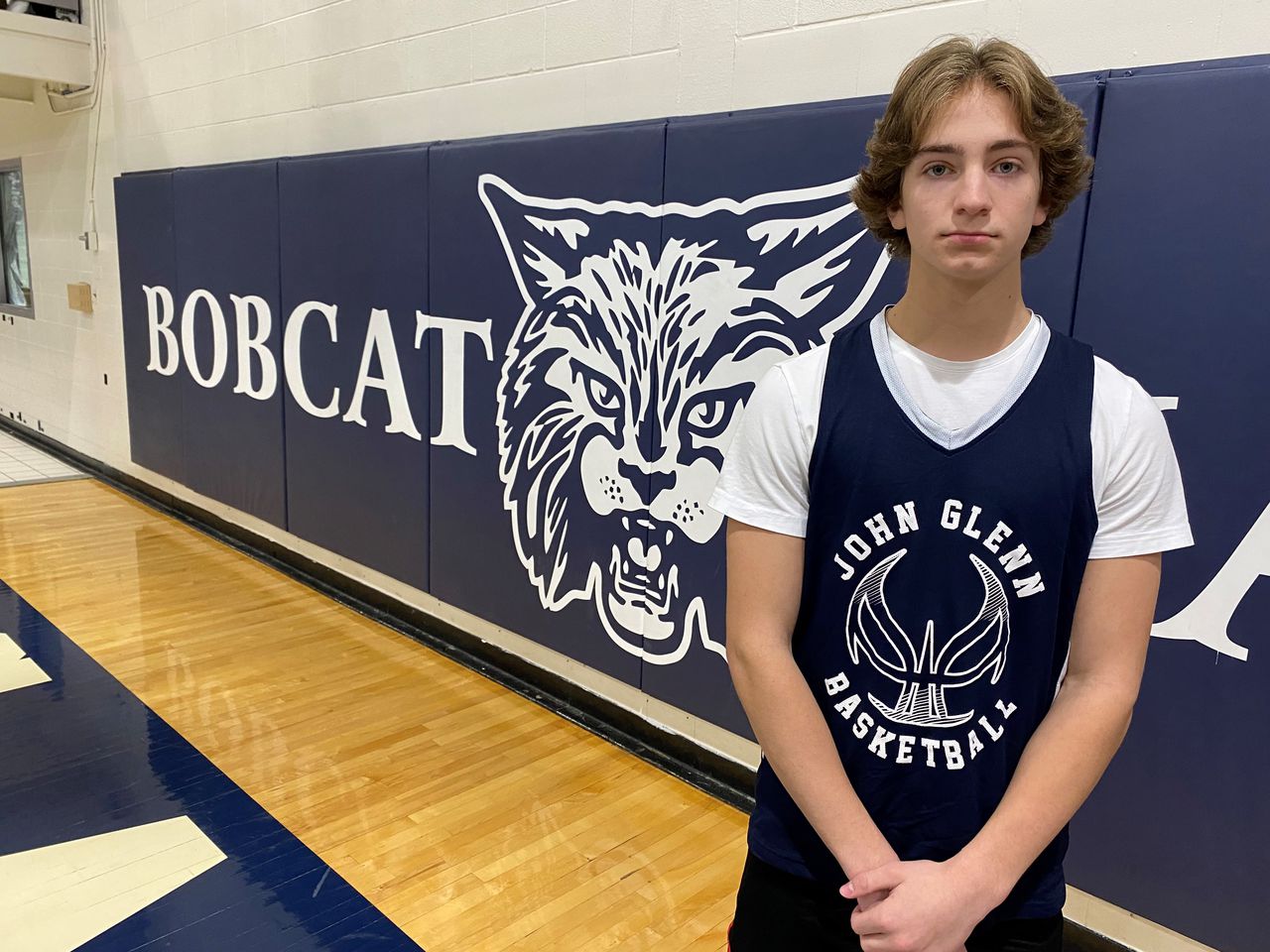 Luke West of the John Glenn boys basketball team for 2022-23.

After winning four games in each of the past two seasons, John Glenn has reached that mark before the holidays.

The Bobcats rolled past Pinconning 70-48 to improve to 4-2 on the year, already matching their best season since 2019-20. After a slow start, Glenn took control over the final three quarters to run away from its former NEMC rival.

Sean Wesolek scored 17 points while Luke West tallied 13, Trevor Hartman 12 and Brady Rogers 10. Ten players got in the scoring column for the Bobcats. 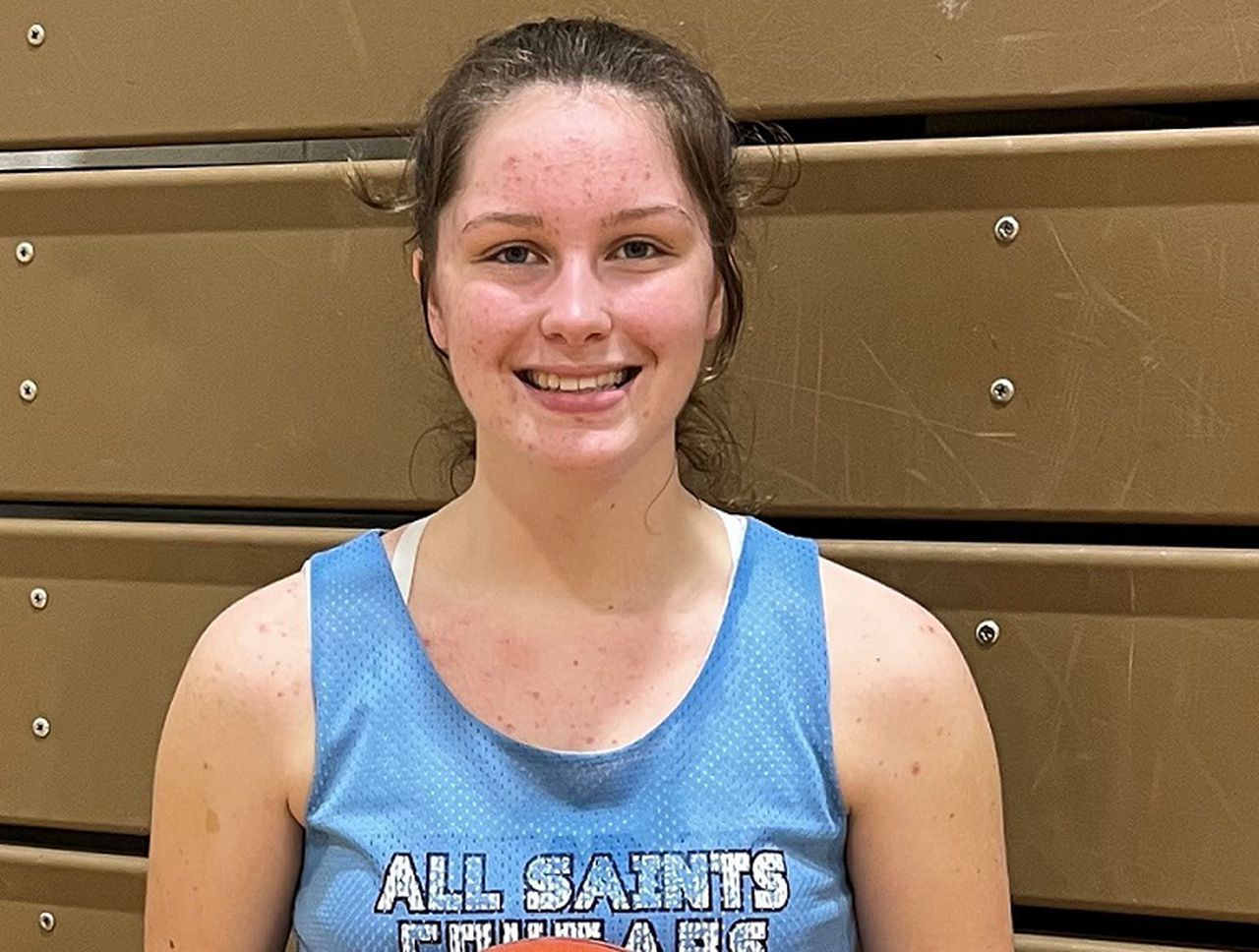 Annaka Neetz delivered a monstrous game, dominating the paint for a 27-point performance as Bay City All Saints rolled to a 43-25 victory over Au Gres.

Neetz sank 12 shots from the field in her big game and hauled down 10 rebounds to complete the double-double. Lili Costilla delivered eight points and 10 boards in the win for All Saints, which led 24-12 at the half. Arnell Somlar of the Bay City All Saints boys basketball team for 2022-23.

Somlar poured in 27 points as the freshman continued to dazzle. Schular notched 17 points while Jacob Meier came through with nine points and 12 rebounds. Jack Wetters and Antonio Salinas each hauled down seven boards for the Cougars. 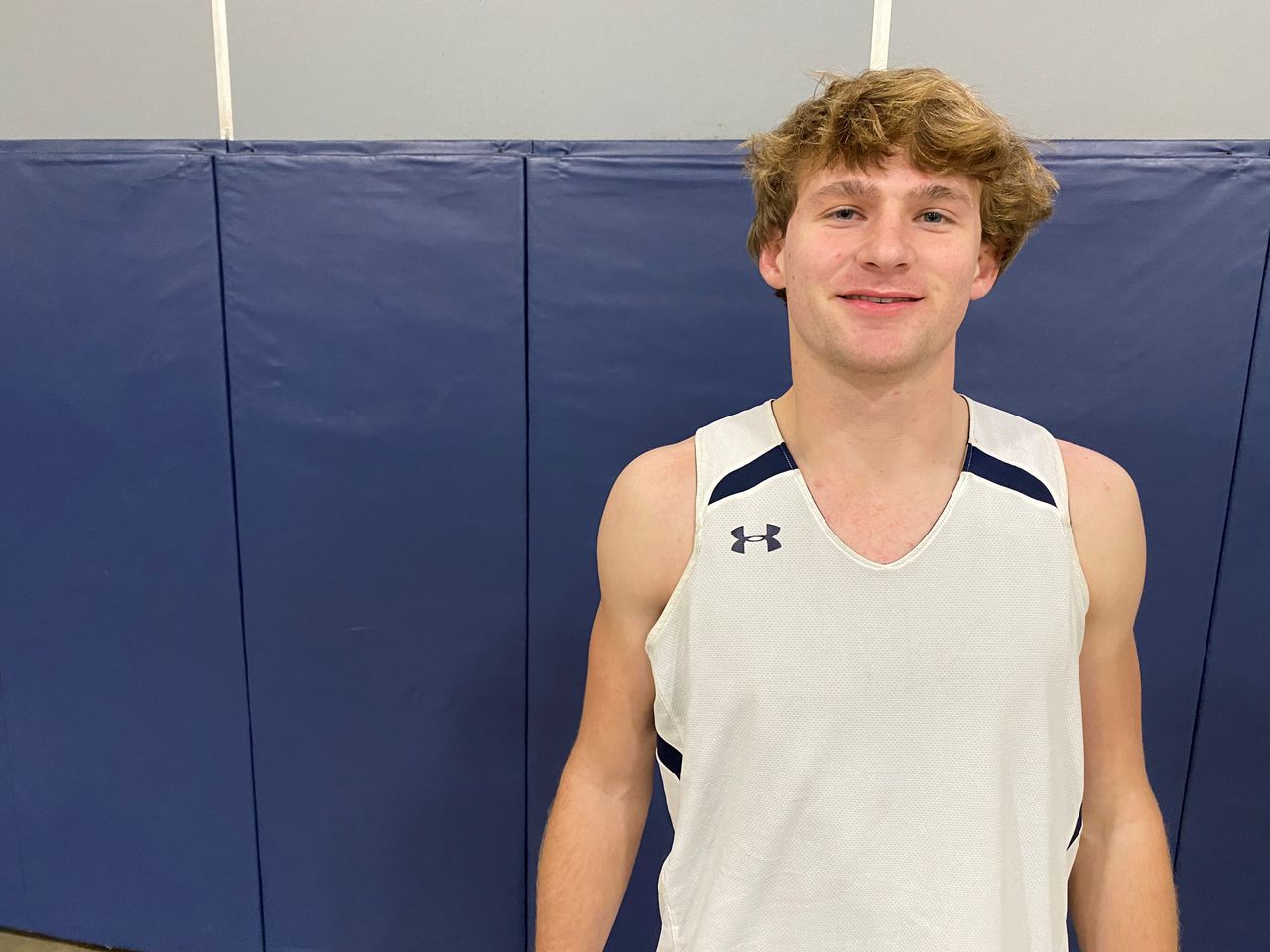 Brayden Sullivan of the Standish Sterling boys basketball team for 2022-23.

A whirlwind third quarterback spun the game and sent Standish-Sterling soaring to a 60-41 win in the non-conference clash.

Standish Sterling (4-0) trailed 28-24 at halftime then absolutely went wild. The Panthers pumped in 28 points in the third quarter while holding Beaverton to just two points to take control.

Brayden Sullivan and Truman King each scored 14 points in the win while Jacob Bartlett and Brock Bartlett each added eight points.

Macey Fegan went to work one again, pouring in 33 points to propel Standish-Sterling to a 59-33 victory over Beaverton.

The two-time All-Stater also ripped down eight rebounds in the win. Charlotte Daniels had a strong performance with nine points and five boards while Addie Walker filled the stat sheet with nine points, four rebounds, four assists and four steals.

For a team that hadn’t won a game, Ogemaw Heights sure looked like it knew how to finish.

Trailing 34-28 entering the fourth quarter, the Falcons went on a game swinging 18-8 run to pull off a 46-42 victory over Carrollton. The win halted a seven-game slide to start the season.

Harper Munson poured in 15 points, Emily Stockton 11 and Alivia Whisman eight in the win. Stockton led the fourth-quarter push with a pair of 3-pointers. The Falcons (1-7) sank seven triples as a team. 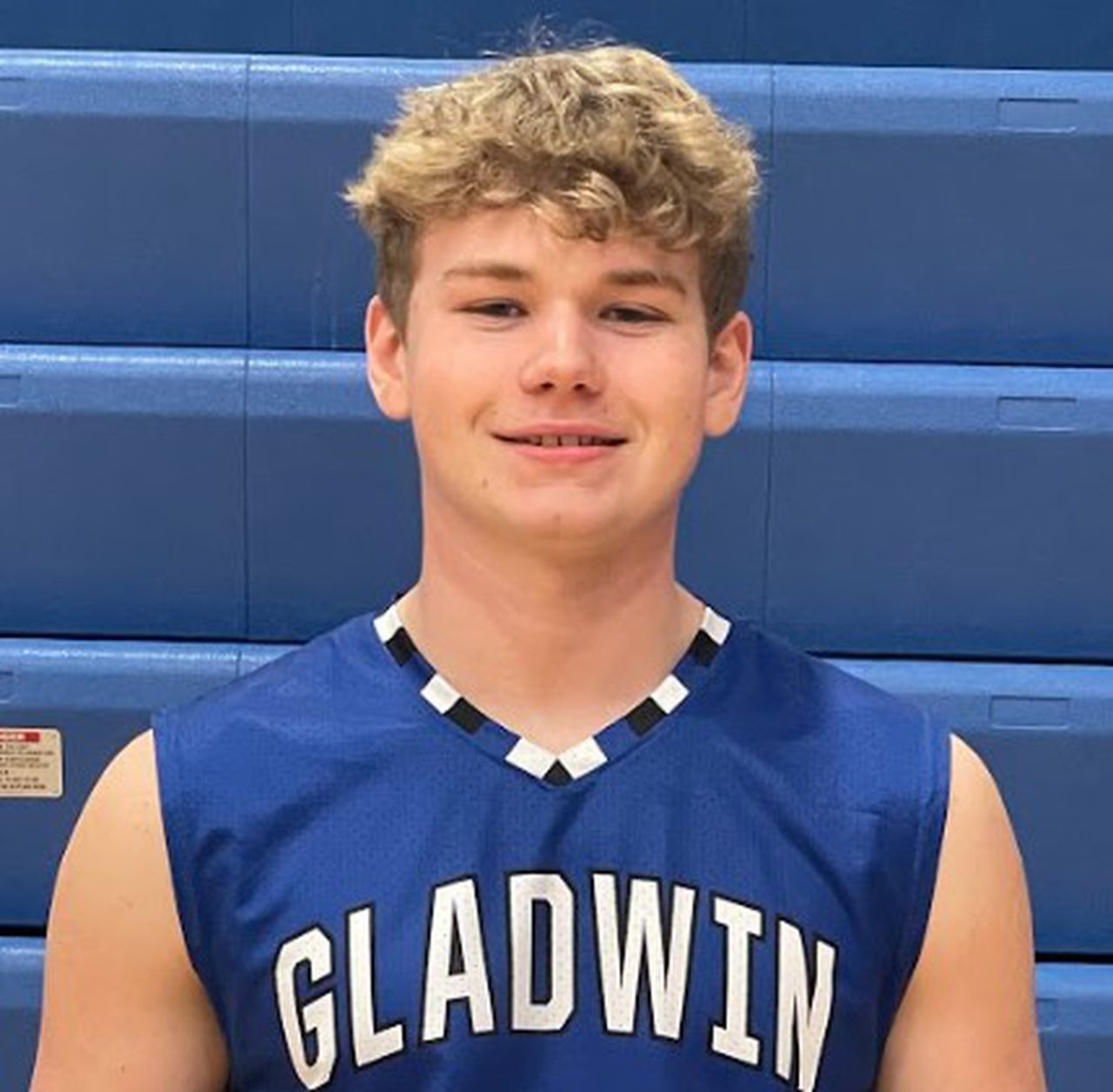 Dalton Peters of the Gladwin boys basketball team for 2022-23.

Gladwin put it all together and pumped out a 69-39 victory over Houghton Lake in non-league action.

The Flying G’s (3-2) put nine players in the scoring column in a strong offensive effort and also forced more than 20 turnovers in a stellar defensive showing.

Laker got clutch plays in the closing seconds on both ends of the court, pulling off a 54-52 victory over Ubly in non-league action.

Leading by two with 10 seconds to play, Mikel Good made a diving steal to preserve the lead for Laker. Layton Krohn coolly sank two free throws at the other end to ice the win for the Lakers.

Kingston’s pressure defense wore down Unionville-Sebewaing in a 59-35 non-league victory.

Kingston (4-1) outscored USA in every quarter, leading 33-20 at the half and never turning back. Owen Corlis pumped in 21 points in the win.

Reese keeps coming at teams from all angles, putting 10 players in the scoring column and five with eight points or more in a 73-48 win over Deckerville.

The Rockets (3-2) won for the third straight contest, getting 13 points from Jack Dice and 12 from Beck Shores. Mitchell Stricker added 10 points while Luke Foco and Konner Kratz scored eight apiece. 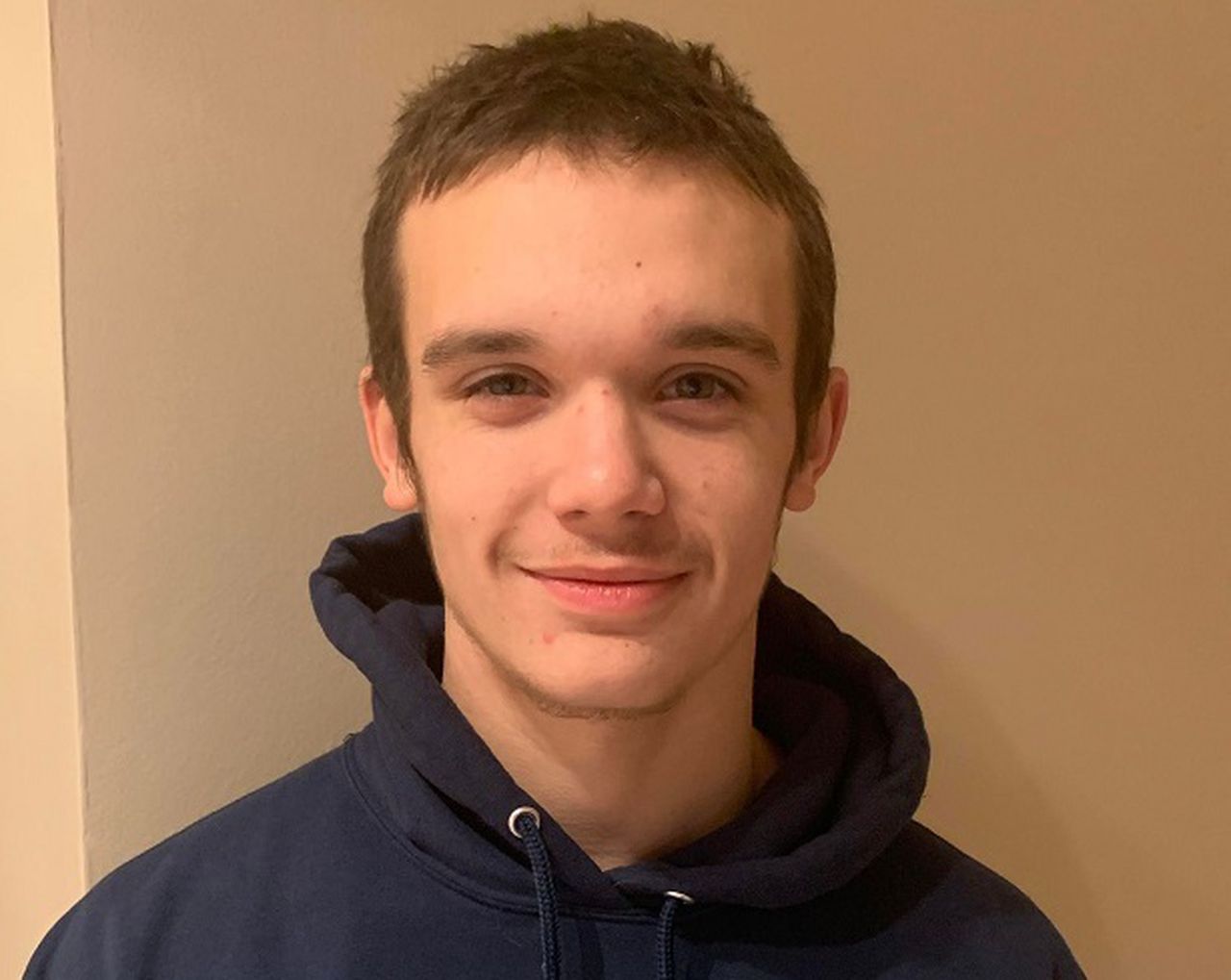 Connor Dowd of the Essexville Garber boys swimming team for 2022-23.

Connor Dowd has been crafting a legacy with the Essexville Garber swimming team.

And he also made a name for himself in Oscoda.

The Garber senior took down an Oscoda pool record that stood since 1978, winning the 100 butterfly while helping the Dukes to a 108-72 victory in Independent Swim Conference action.

Dowd went a state-qualifying time of 54.01 in the fly, supplanting Oscoda’s Bob Watson for the top time in the OHS natatorium.

Dowd also won the 100 backstroke and was part of two winning relays. He joined Thoth Moya, Cameron Callahan and Elijah Smith on the 200 medley relay and teamed with Moya, Callahan and Chance Owen on the 200 freestyle relay.

Lions’ Anzalone running through past adversity on way to career season

What’s Going on With the Quality Dairy Locations in East Lansing?