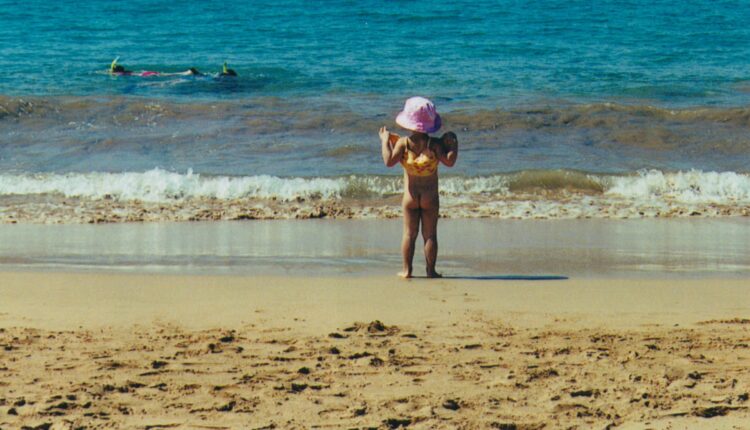 About a month ago a friend recommended me – or, dare I say, made me passionate about it – to find an artist that “I would love”: Lily Talmers. In fact, I loved her – so much that I had the pleasure of sitting down with her last Friday to talk about her latest album release, Remember Me As Holy, which came out on February 11th and has been the soundtrack of my life ever since .

Now it’s my turn to expose you to the talent of this 24-year-old Ann Arbor-born, Birmingham, Michigan-born, university-resident alum singer-songwriter, from the warmest corners of her heart and the coldest of places of her memory.

I’m not sure if it was the cover that attracted me and that reminds me of other great records with nostalgic childhood images like Big Thief’s Capacity or Angelo de Augustine’s “Time” or the first note of the song “Maybe It’s Madness”. But when I first researched Talmers, I stopped everything I did to delve into their 12-song LP.

I started listening track by track, reading all the lyrics. I started a journey with oscillating emotions: I cried with “Francis”, gasped for air in “Middle of America”, stared at the wall in disbelief during “No Woman”, repeated “Into the Air” six times in a row and stopped one Take a break with “The Push and Pull of It”. My poor heart!

Talmers is a songwriting style reminiscent of Joni Mitchell and is just as beautiful a way of storytelling as Leonard Cohens. She feels influenced by the sound quality of many artists of the 1960s. Her second studio album is an ode to her roots in folk music, roots that she respects so much that she wouldn’t dare ever authentically emulate them, but ones that certainly live in her.

I was interested in finding out the meaning of the title of the record, Remember Me As Holy, which is a line in the song “Francis”.

“It is afraid that you influence people and that they have memories of you that you can no longer control and who want to control those memories like a form of love,” Talmer told me in her seated interview with The Daily. “If for some reason you are no longer in someone’s life, there is at least hope to be remembered as something good.”

Her words expressed a vulnerability of thought that stung and at the same time moistened my mouth with a sweet taste – such a wondrous notion had never crossed my mind.

Less than a year after releasing their first LP, Temple Down, Talmer describes Remember Me As Holy as “more confident and at the same time more acceptable when I get involved in the production, as a kind of artistic expression”.

Talmers pointed out that she’s a little scared about recording her songs because holding on to them means they’re no longer breathing.

However, when Talmers set out to record this album, which began in October 2020, he was sure of the people she wanted to work with. The record was co-produced by University of Michigan alumni Geoff Brown and Ian Eylanbekov and mastered by Elie Curtis, who is currently studying at the School of Music, Theater & Dance. Brown also did the mixing and engineering and Eylanbekov did the instrumental music along with Ben Green and David Ward (from the band “Sabbatical Bob”).

Talmers described the recording as “an exercise in communication, learning how to speak each other’s language”. Though contradicting at times, music was about getting to know each other and knowing that they all respected each other’s tastes and artistic inclinations.

Talmers remembers a groundbreaking but grueling moment during recording when she and her musical partners spent 14 hours recording the track “Into The Air”. It took several takes, listening and trying to agree on guitar patterns and melodic twists, before the song was finished.

“There’s a point where the song feels updated and it’s what it is on Breath, it feels representative of what I want to portray, ”said Talmers.

However, while listening to the record, I held my breath and didn’t let go of it. I didn’t want to miss any note, word, or chain of breathtaking lines – every song deserved my greatest attention from beginning to end.

I remember hearing “Maybe next year # 2” and dropping my jaw on the floor when I said, “I’m from a country that has been bleeding for a long time. These days a bruise is just a pond of steaming July / You paint a blue sky and everything is fine. “The track is one of three songs that deal with themes of growing up in America’s money-driven society and Talmers’ sense of space and loneliness in the Midwest.

Talmers, who traveled to Europe before completing her thesis on the ethnomusicology of Portuguese and Greek lamenting music, mentioned that she was longest ashamed of America’s alleged lack of culture. Still, she found that writing about it was a cathartic process to validate yourself and the shortcomings of the United States: “You have to be proud because you’re stuck.”

This longing for or lack of appreciation of your culture is palpable in the melodies that accompany the artist’s work. With cute guitar patterns, signature wind instruments, and a soft and almost whispering voice, Talmers managed to arouse feelings that I didn’t even know I could feel.

When asked what she wanted to achieve with the record, Talmers said: “I hope (my songs) help you to be more honest with yourself, because the songs are really just me trying to find what is inside of me, to harmonize loudly. ”

She wanted her listeners, shocked by the vulnerability of it all, to see in her a sincerity that Talmers believes has gotten better over the years, one that she can channel and deliver when “it’s kind of like, being raw with yourself is a pill, ”she said. In my humble opinion, she achieved all of that and more.

Sitting down with Talmers was more of an insightful experience and heartwarming conversation than an interview. It was a really well spent afternoon – a new favorite and one that I know for sure will remain a favorite. I’ve long been a fan of melancholy storytelling in small chords, or as the American singer-songwriter Tom Waits once put it: “Beautiful melodies that tell me terrible things.” And Talmers certainly has a lot to tell us.

Please donate to The Michigan Daily

Married in the Mitten: Wedding Venue Options at Jacob’s Farm in Traverse City