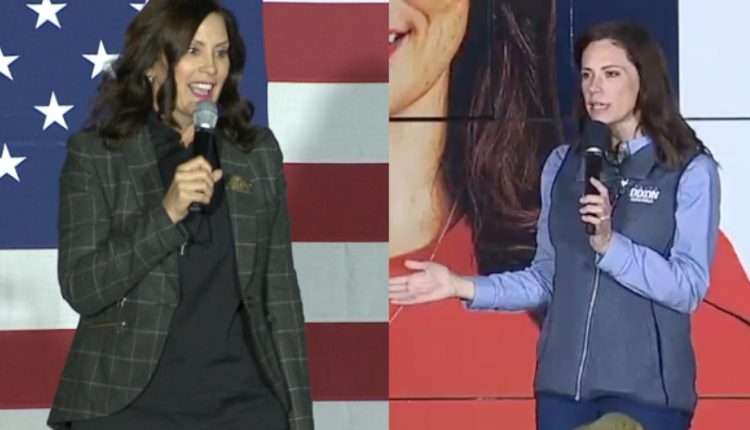 GRAND RAPIDS, Mich. — During the last weekend before Election Day, Gov. Gretchen Whitmer and GOP challenger Tudor Dixon made stops across the state to try and win over undecided voters.

Republican and Democratic leaders consider Kent County critical to each of their party’s success on Tuesday, arguing it’s a fight for higher turnout at this point in the election.

“People are really busy,” Whitmer said when asked about lower turnout in Detroit. “They’re working hard to get their kids back on track and their life back to normal, but yet, this is a really important election. That’s why we are criss-crossing the state and reminding people you have voting rights right now that you can exercise.”

FiveThirtyEight, which tracks polls in key races and averages them out, shows Whitmer slightly ahead of Dixon.

However, a recent survey from the Pew Research Center and others list the economy and inflation as the top issues for voters, which experts say could hurt candidates like Whitmer.

In an interview with FOX17, Whitmer argued the state has been friendly to businesses, citing recent economic development under her administration, such as bringing Perrigo’s North American headquarters to Michigan and securing a $300 million investment for a semiconductor wafer manufacturing facility.

“My opponent wants to undo all of those economic development tools we used to get that done,” said Whitmer. “It’s dangerous, irresponsible, and it could put us back for a generation. We either win this decade now or we run the risk of getting left behind for a generation.”

At Sunday’s rally, Whitmer pitched herself as a problem solver who would focus on improving educational and career opportunities if elected again. She also echoed the need to protect personal rights, such as a woman’s ability to chose whether to have an abortion.

Whitmer also urged for a peaceful transfer of power after results are tallied.

“It is incumbent on all leaders to accept the will of the people, to bring down the heat when it comes to political violence, to not take actions to undermine our institutions,” said Whitmer. “These are the foundations of this democracy.”

“We get the chance to bring this state back,” said Dixon. “Forget about all of their negative messages, we are moving forward with an incredibly bright future because of all of you and I just can’t wait for Tuesday night.”

The Norton Shores business woman turned media personality argued Whitmer has dragged the state down over the past four years. She said that would change if she wins.

“We want to make sure that your kids are going to get a world class education and that your family is going to be able to thrive in the state of Michigan,” said Dixon. “We want to make sure that businesses have a partner in state government. It’s so crucial right now with the way that they’ve been treated by this government for the last four years. They’re desperate to make a change and we’re going to bring Michigan back.”

Inside Election Day With A City Clerk