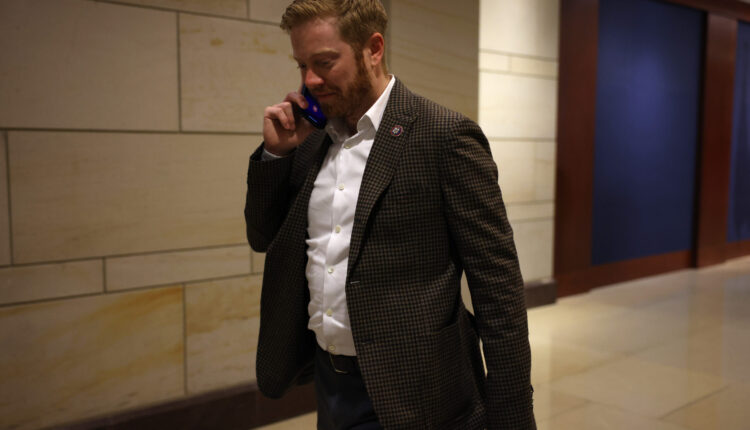 In Michigan’s 3rd Congressional District, Republican U.S. Rep. Peter Meijer of Grand Rapids was ousted Tuesday by John Gibbs, who previously worked in the Department of Housing and Urban Development during the Trump administration.

Hillary Scholten with her son in Grand Rapids | Nick Mannes

Gibbs will face Democrat Hillary Scholten, an immigration attorney who lost to Meijer for the open seat in 2020. The district has been redrawn and leans Democratic now. The Democratic Congressional Campaign Committee (DCCC) made the controversial move to boost Gibbs in the race with an ad buy.

Meijer, a veteran and heir to the Meijer grocery chain fortune, later conceded to Gibbs, calling the race “a hard fought primary campaign,” in a statement.

The former president had a strong presence in this West Michigan race, endorsing Gibbs in November 2021. Gibbs also was featured at an April Trump rally in Macomb County. Trump invited Gibbs on stage after slamming Meijer for voting to impeach Trump after the Jan. 6, 2021, attack on the U.S. Capitol to overturn the 2020 election Trump lost to President Joe Biden.

Meijer was one of 10 Republican representatives who voted to impeach Trump for his role in the Jan. 6 insurrection.

Gibbs has supported Trump’s false claims that the 2020 election was stolen, with his website saying there were “widespread irregularities and statistical anomalies in the 2020 election.” He previously came under fire due to a history of Tweets promoting conspiracy theories, according to a report from CNN.

In January 2021, Meijer released a letter saying he would not object to counting electoral votes for Joe Biden. According to a report from the Detroit Free Press, while Meijer and 12 other lawmakers had concerns about abuses in the election system, it is not Congress’ role to reject electors sent by the states. Meijer had centered his campaign around “defending West Michigan values,” discussing issues like inflation and support for veterans. Meijer served as a non-commissioned officer in Iraq.

Here are the results of other key congressional results across the state:

U.S. Rep. John Moolenaar of Midland was victorious over challenger Thomas J. Norton. Jerry Hilliard, who ran uncontested, will be the Democratic nominee.

The GOP race between Republican Hima Kolanagireddy and Whittney Williams was ultimately decided in Williams’ favor. With an estimated 99% of votes counted at 12:45 p.m. Wednesday, Williams received 53.7% of the vote. She will face U.S. Rep. Debbie Dingell (D-Ann Arbor) in November. And here are the unopposed candidates who move on to November ballot:

U.S. Rep. Jack Bergman (R-Watersmeet) ran unopposed in the GOP primary and will face off in November against Democrat Bob Lorinser, who also ran unopposed.

U.S. Rep. Bill Huizenga of Zeeland will face Democratic write-in candidate Joseph Alfonso in the general election, with both candidates unopposed in their primaries.

U.S. Rep. Elissa Slotkin (D-Holly) and state Sen. Tom Barrett (R-Charlotte) will face off on the November ballot, with both candidates running unopposed in their primaries. This is considered one of the most competitive races in the nation.

They Lost Medicaid When Paperwork Was Sent to an Empty Field, Signaling the Mess to Come