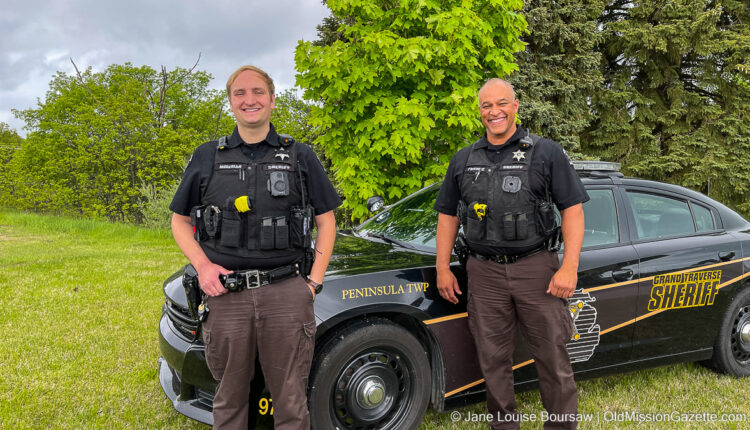 (Peninsula Township Deputy Sean Mugerian addresses a few rumors – no, they’re not just chilling out if you see them parked somewhere – and gives us a behind-the-scenes look at the work he and Deputy Virnell France do on the Old Mission Peninsula. Pictured above is Sean on the left and Virnell on the right. -jb)

My name is Deputy Sean Mugerian, and I am one of two deputies assigned to Peninsula Township. I wanted to simply introduce myself, go over some stats, and then talk briefly about some rumors that have been circulating within the community.

I have been a deputy with the Grand Traverse County Sheriff’s Office (GTSO) for six years. For the vast majority of this time, I was assigned to Garfield Township as a community police officer. Prior to my start with the GTSO, I served in the US Army for six years.

I have only been assigned to Old Mission Peninsula since January 1st of this year. In that time, I have responded to more than 700 calls for service. Some of these calls include non-criminal complaints such as civil disputes, crashes, natural deaths and residential/commercial alarms.

These criminal complaints take a significant amount of time to investigate. I will often go to the Peninsula Township Office or to a parking lot to work on these reports. If you see us sitting at a boat launch or in a church parking lot, feel free to stop by and see what we are doing. We are completely transparent and do not mind whatsoever.

A major concern within the township is speed. From January 1st through July 13th, I stopped 129 vehicles, resulting in 52 tickets. Seventy-seven percent of the drivers stopped were local to Traverse City or OMP. More than 40 percent of the traffic stops made were on Peninsula Drive.

An issue that we are facing at the GTSO is retention. Since March of this year we have lost 13 deputies. This accounts for nearly one-third of our road patrol. The loss of these deputies also forced the department to eliminate our traffic enforcement unit. This traffic unit spent a lot of time on Old Mission. Now that they are gone, I try my best to run as much radar as I can between calls and reposts. Please know that I am doing everything I can to reduce speed within the township.

Lastly, I would like to address a few rumors that have been circulating recently. As you all probably know, we unfortunately responded to a fatal crash on Center Road near East Shore Road on Halloween. Contrary to the rumors, the preliminary investigation has revealed that speed was NOT a factor in this crash. Please do not spread false information without knowledge of the case.

The other rumor is in regards to the gray Audi that has been reported numerous times driving recklessly on Peninsula Drive. The driver of this Audi has been ticketed several times recently. Unfortunately, I cannot curb somebody’s behavior or mindset. If violations are witnessed, I will continue to issue citations to the driver. If you witness any reckless behavior, please contact 911.

Anyone who has any questions (not an emergency) can contact me at (231) 633-2579. Please note that I work a random schedule, meaning some days I will work during business hours and some days I work all night long. If I do not call you back immediately, I am not ignoring you. I will call you back during regular hours or on my next working day.

I hope this has cleared up some misinformation. I am completely open to any and all questions you may have for me. I look forward to meeting each and every one of you. Thank you for your time.

Trump will be close by campaigning in Ohio Monday, but appears to be skipping over Michigan ⋆