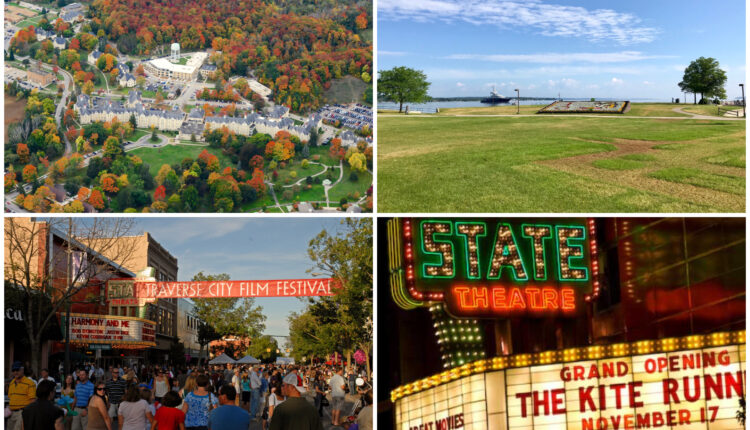 While the 2000s can only reasonably be described as “the recent past,” they still saw significant transformation in and around Traverse City. Not only did the decade birth one of the city’s signature festivals – and with it, an increasingly vibrant arts and culture scene in Traverse City – but it also brought the formation of two of the community’s core gathering spaces. Below, The Ticker explores these events that, while only two decades in the rearview, have made Traverse City a fundamentally different place than it was in the late 20th century.

Today, any list of Traverse City’s top gathering spaces would include both the Open Space and the Grand Traverse Commons. Until the mid-2000s, though, neither existed in its current form.

The story behind the revitalization of the old Traverse City State Hospital arguably starts in 1989, with the hospital’s closure. When the state shuttered the hospital, the intention was to demolish it entirely. But community protest throughout the 1990s – as well as the formation of the Grand Traverse Commons Redevelopment Corporation – ultimately saved the historic buildings from that fate. Still, the latter half of the ’90s proved discouraging for advocates of the State Hospital’s second act, with ideas and proposals for renovation and redevelopment stalling out repeatedly.

2000 got the ball rolling in a new way. That year, Ray Minervini of The Minervini Group started working toward an agreement with the Redevelopment Corporation. And while multiple developers had come and gone by this point, the Minervinis proved to be the right team, with the right idea, at the right time.

By June 2000, Minervini had a signed redevelopment agreement in hand, which allowed his team to move forward with engineering, architectural work, environmental analysis, and feasibility studies for their project. And by the spring of 2002, the Minervinis were underway with significant renovations of the State Hospital, with top priorities including the replacement of Building 50’s quarter-mile-long roof.

By 2007, most of the once-deteriorating buildings of the Traverse City State Hospital had been transformed into the unique residential and commercial spaces that make up The Village at Grand Traverse Commons. Many of the businesses that set up shop at the Commons in those early years are still there today, including Trattoria Stella, Higher Grounds, Pleasanton Bakery, and Left Foot Charley.

Right around the same time that the Minervinis were reviving the State Hospital buildings, a group of local residents was working to save and resurrect the property around those structures. In the early 2000s, the City of Traverse City and Garfield Township banded together to form a joint recreational authority concerned with finding a future use for the historic barns on the State Hospital grounds, along with several surrounding parklands. In 2004, voters in the City of Traverse City and Garfield Township supported a millage that gave the authority the funds to operate and maintain the property and barns for the years to come. Today, the 56-acre Historic Barns Park is one of Traverse City’s most beloved open spaces, home to the popular Cathedral Barn event venue, the Botanic Garden, SEEDS, and more.

And speaking of open spaces, 2005 was the year in which the old Traverse City Light & Power plant on the water side of Grandview Parkway was decommissioned and torn down, making way for the full Open Space public park we know today.

Though it would grow significantly in the years to come, TCFF initially had just three main indoor venues: the State Theatre, the City Opera House, and Old Town Playhouse. Future years would add venues like Milliken Auditorium, Lars Hockstad Auditorium, the Traverse City Central High School auditorium, and Bijou By The Bay, with the festival’s slate of films expanding as its footprint grew. But the initial year saw a smaller version of TCFF, with a slimmer list of movies that included acclaimed films such as the Bill Murray-starring dramedy Broken Flowers and the Werner Herzog documentary Grizzly Man.

Despite the smaller festival, many of the elements that would become hallmarks of the festival over the years – such as the opening night party on Front Street and the free movies at the Open Space – were already in place in TCFF’s first year. The inaugural slate of Open Space movies included Casablanca, Ferris Bueller’s Day Off, Jaws, and The Princess Bride.

Looking back on that first year, TCFF Founder Michael Moore says he modeled much of the festival off Colorado’s beloved Telluride Film Festival. It was at Telluride that Moore debuted his first directorial feature – the 1989 documentary Roger & Me – and he tells The Ticker that the experience had a profound effect on him.

“I consider the Telluride Film Festival to be the best festival in the country,” Moore explains. “That was my first film festival and it was where Roger & Me got its launch and became a big hit, and I just admired how they did things out there. And so, in the first year [of TCFF], a lot of what we did was modeled on Telluride. For example, they shut down their Main Street on opening night for a big barbecue attached to the opening night film, so we shut down Front Street for our opening night party. And they offer outdoor movies in their park that are free for everybody, too. A lot of things [at TCFF] came from Telluride.”

Incidentally, the 2022 TCFF is being spearheaded by Johanna Evans, a Telluride Film Festival veteran.

One often-forgotten piece of trivia around the TCFF is that, while the State Theater was a festival venue from the start, it didn’t open for consistent, year-round moviegoing until November 2007. In the early 2000s, the State Theater was owned by Rotary Charities, which worked alongside Interlochen Center for the Arts and the State Theater Group to renovate and revitalize the theater. The venue, by that point, had been shuttered since 1996. The 2005 film festival helped shine a brighter light on the theatre, driving significant donations and volunteer interest to the theater’s restoration process.

In June 2007, Moore announced that Rotary Charities had signed over the deed of the State Theater to TCFF, describing the deal as “a performance-based mortgage which states that the $600,000 ‘cost’ of the theater is forgiven if we keep it open a certain number of days for at least five years.” On November 17 of that year, the State had its grand opening as an active movie theater. The opening night movie? An early screening of The Kite Runner, an adaptation of the popular 2003 Khaled Hosseini novel of the same name. The film wouldn’t release officially until December 14 of that year.