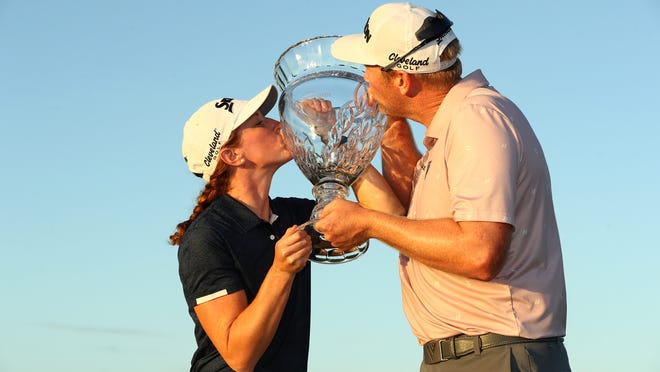 Ryan Brehm could’ve bagged competitive golf a long time ago. He could’ve done a number of things to earn a comfortable living, and a stable pay check. He could’ve gone and been a college golf coach.

But the dream kept tugging at him, and he kept chasing.

And early Sunday evening, in his 68th start on the PGA Tour, the dream became a reality, with Brehm, a Mount Pleasant native, Traverse City resident and Michigan State alum, winning the Puerto Rico Open at Grand Reserve Golf Club in Rio Grande.

The win comes with a whole host of goodies and job security. He now is exempt on the PGA Tour through the 2023-24 season, he gets into this week’s Players Championship at TPC Sawgrass, May’s PGA Championship and January’s Tournament of Champions. He doesn’t get spots in the Masters or US Open, because the Puerto Rico Open is an alternative-field event opposite the stronger-field Arnold Palmer Invitational. But that takes nothing away from Brehm, who still gets the winner’s check of $660,000 — he previously won $810,391, total, in his PGA Tour career, and $696,194 in 89 starts on the Korn Ferry Tour.

Most importantly, Brehm will also have accumulated five full years on the PGA Tour by the end of this exemption, making him vested for the PGA Tour pension.

“I don’t know what to say,” Brehm said after the final putt. “We had our head down and just tried to make great golf swing after great golf swing. We got a few putts to roll in.

Brehm, 35, had never finished better than 11th on the PGA Tour before this week — he’s the first player to make his first top 10 a win since Jason Gore in 2005 — and had lost his PGA Tour card for 2021-22. But because he had to miss a PGA Tour start last year because he caught COVID-19, he was given one start this season to attempt to get his card back. He chose the Puerto Rico Open, where he tied for 11th last year, and had to win or finish second alone, or be stuck on the Korn Ferry Tour for the rest of the year. But he actually likes KFT. So, interestingly, he called the week the “calmest” he’s ever been on the course.

“I had everything to win,” said Brehm, “and nothing to lose.”

With wife Chelsey on the bag this week, Brehm made a sport that’s been so hard on him over the years look so darn easy, finishing at 20 under to win by six strokes over Max McGreevy. Brehm shot a bogey-free, final-round 67, and was in the 60s all four days. After making a 5-footer par to put a bow on the week, the man who wears Delta Dental’s logo on his polos probably has never smiled wider.

Brehm made just one bogey all week, at the 14th hole Saturday. He then made two birdies in the last four holes to steady the ship.

For all intents and purposes, he might’ve won the tournament at the par-5 18th on Saturday, in the third round. Brehm found the right trees off the tee, then hooked his approach into the greenside woods. Rather than take a penalty stroke, he felt he had a wide-enough opening to try to at least save par. Instead, he punched from the woods to 8 feet, and made birdie to take a three-shot lead into the final round.

Had Brehm made bogey and his playing partner, Michael Kim, made birdie, they would’ve been tied entering the final round. Instead, Brehm made the birdie and Kim missed a short birdie putt for the three-shot difference.

It was a break for a guy who hasn’t had many of them over the years in his pursuit of a prosperous touring career. Even when he got his PGA Tour card back for 2019-20, COVID-19 hit and stalled any momentum. He got to keep his card for 2020-21, because of COVID-19; in January 2021, his mother, Debbie died from a brain tumor. She was just 62.

Brehm told The Detroit News at last year’s Rocket Mortgage Classic that golf had proven to be “healing” as he mourned his mother’s death. His former college teammate Casey Lubahn, his current swing coach, said he’s noticed a difference in Brehm since his mom’s death.

After losing his PGA Tour card, he went back to Traverse City and barely touched a club for two months. He embraced time with family, including two younger sisters and his father.

“This game makes you think small all the time … you get nit-picky on little things, like hotel rooms and golf courses and traffic and chipping mechanics,” said Lubahn, Michigan State head’s coach who is in South Carolina for a golf tournament. He tried finding a flight into Puerto Rico on Saturday, but couldn’t make it work. So, instead, he monitored the action while overseeing a practice round, constantly refreshing his cell.

“This was a great, big, horrible thing to put it in perspective.

“Now, he talks about life.”

And, life just got remarkably better for Ryan and Chelsey. This is the third time he’s earned a PGA Tour card, but the first time the guaranteed exemption is more than one year. He now heads to The Players, the PGA Tour’s flagship event; interestingly, Chelsey signed him up before last week’s deadline, just in case.

“She believed,” Brehm said. “She was smart to do that.”

Brehm, the 773rd-ranked golfer in the world picked up Sunday where he left off Saturday, making a 10-footer at the first for a birdie. By the 10th hole Sunday, his lead was four. After a birdie at the par-4 10th, his second birdie in a row, the lead was six. He then birdied the par-3 11th, and the rout was officially on — as was the ferocious weather, with piercing rains and driving winds popping up for much of the finish.

Just another obstacle for a man who’s professional life has darn been near an obstacle course.

After the final putt, Brehm and Chelsey shared a long embrace and kiss. Just off the green, waiting was Nate Lashley, the winner of the 2019 Rocket Mortgage Classic in Detroit, waiting with a bottle of champagne. During a post-round speech to the gallery, Brehm finally teared up.

Brehm, a three-time Michigan Open champion and two-time Korn Ferry Tour winner who was an assistant at Michigan State before fully embracing a professional touring career, becomes the first Michigan native to win on the PGA Tour since Brian Stuard (Jackson/Oakland ) won the Zurich Classic in New Orleans in 2016 (Stuard finished tied for 22nd in Puerto Rico). Marshall’s John Morse won the Hawaiian Open in 1995.

Brehm is the first Michigan State alum to win on the PGA Tour, and continues a banner run for Spartans golf, after Michigan State senior James Piot won the US Amateur last summer and Michigan State sophomore Valentina Rossi made the semifinals of the US Women’s Amateur.

He joins Dan Pohl as Mount Pleasant natives to win on the PGA Tour. Pohl won twice in 1986.