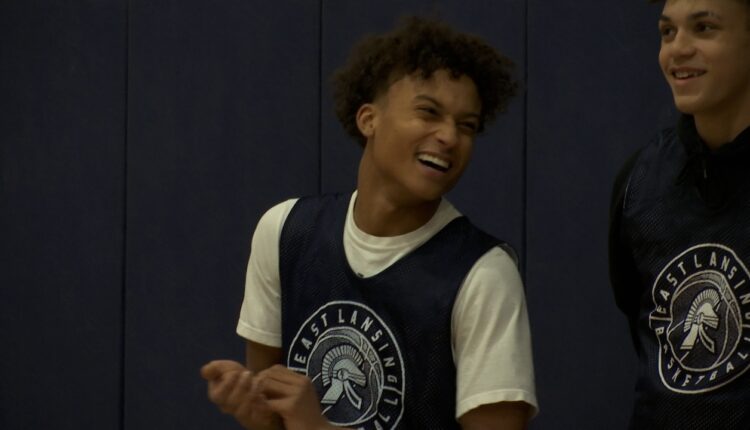 Player of the Week: East Lansing’s Mason Woods is back and better than ever

EAST LANSING, Mich (WLNS) – There’s a point guard at East Lansing who fully understands what it means to persevere. Mason Woods missed last season because he had to get his right knee scoped but you’d never know it based upon how he’s playing this year.

He’s averaging 19 points a game and has been money from behind the arc draining 24 three-pointers while shooting 86-percent from the free throw line. The recovery process wasn’t easy for woods and there are some days where he feels a little sore but what part of his game has improved the most during his recovery?

“Well I’m really happy for Mason,” said East Lansing head coach Ray Mitchell. “Mason made our varsity as a freshman and he’s always been a player believe it or not I kind of expected this Mason has always been big time player big time scorer I’m not really suprised this is what he does that’s why he was on the team as a freshman and I’m sure he’s gonna continue to do what he’s been doing and even go above and beyond.”

Ever since his early year on varsity, Woods has been a problem for opposing squads and it’s all due to his competitive nature.

“Mason will compete with you on anything, I bet right now if I told him I could tie my shoe faster than him he would bet me you know and obviously he’s a great football player he’s a great track guy he’s just a really good athlete so I would want him on any team that I would have in any sport cause I know one thing about him he wants to win he’s going to do whatever it takes to win and he does it with a passion,” said Mitchell.

“It’s the reason I play the way I play you know I wanna…I wanna be the best at everything I do,” said Maosn. “I wanna if it’s playing a game or it’s like he said tieing my shoe like I wanna be number one I want that first place next to my name so it just makes me the player that I am today my competition in me always wanting to win .”

The Trojans are on a two game winning streak and will travel to Lansing Sexton on Friday night, tip-off is set for 7 pm