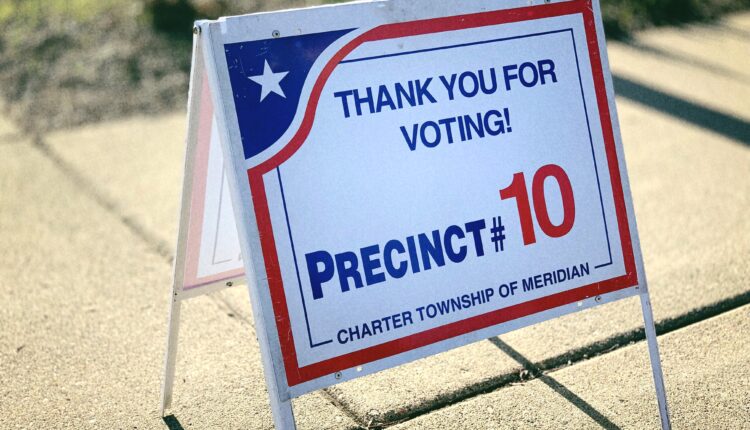 More than 42 million Americans already have voted in the midterms ⋆

WASHINGTON — More than 42 million Americans by mid-afternoon on Monday had gotten a jump start on Tuesday’s midterm elections, casting their votes through mail-in ballots or by heading to in-person early voting centers.

The United States Election Project’s data showed a significant number of voters continue to prefer voting ahead of Election Day, possibly continuing a shift that began years ago but was forced upward in 2020 by the COVID-19 pandemic.

White House press secretary Karine Jean-Pierre cautioned Monday that because of the volume of early and mail-in votes, Americans may need to wait days or possibly even weeks until election workers can count all the votes and declare election winners.

“In modern elections, more and more ballots are being cast in early voting and also by mail. And many states don’t start counting those ballots … until after the polls close on Nov. 8,” Jean-Pierre said. “It’s important for us to all be patient while votes are being counted.”

So far, this year’s early voting numbers show 43% of the votes cast are from Democrats while 34% were from Republicans. The remaining 23% were from people without a major party affiliation, according to the election project from the University of Florida.

The number of people voting via mail ballots or early in person has steadily risen each midterm election year, starting at 14% in 2002 before inching up to 20% in 2006.

That upward trend was before the COVID-19 pandemic scuttled many people’s routines during the 2020 presidential election, leading to a record 69% of Americans voting alternatively, either through early in-person voting or by mail-in ballots, according to the U.S. Census Bureau.

Texas, Florida, California, Georgia and North Carolina voters have cast the most early ballots per state.

In Florida, nearly 5 million people have voted early, starting to determine who will win the state’s gubernatorial race as well as one of its U.S. Senate seats and the 28 U.S. House seats.

More Republicans in the Sunshine State have cast ballots than Democrats, flipping the national trend. GOP voters have cast 43% of the early votes compared to 37% from Democrats and 20% from people not registered as part of a major political party.

Florida’s mail-in ballots top the number of people who have voted early compared to in person, 2.5 million to 2.3 million, respectively.

In Georgia, a battleground where Democrats are looking to keep the U.S. Senate seat currently held by Raphael Warnock against a challenge from Republican candidate Herschel Walker, more than 2.5 million people have voted early.

The vast majority of those votes, 2.3 million, were from in-person early voting while the remaining 220,000 people voted by mail.

Georgia, unlike some other states, shares information on the age, gender and race of its early voters.

Roughly half of the early ballots cast in Georgia come from people between the ages of 41 and 65, with another 33% of early votes from people over 65. Voters between 26 and 40 have cast 12% of the early votes with 18-to-25 year-old voters casting the remaining 6% of votes.

Non-Hispanic white people have cast 57% of the early votes so far in Georgia. Non-Hispanic Black voters have submitted 29% of early votes, making up the second largest early voting bloc in the state. Hispanic and Asian American voters each make up 2% of early voters for a total of 4% while Native Americans cast less than 1% of the state’s early votes. The remaining votes were from people with “other, multiple, or unknown” racial characteristics.

In North Carolina, where Republicans are favored to win the open U.S. Senate seat, nearly 2.2 million people have cast early votes with 2 million of those cast in person and the rest from mail-in ballots.

Thirty-eight percent of those votes came from registered Democratic voters while 31% were from Republicans and the remaining 31% of votes were cast by people not affiliated with a major party.

Fifty-two percent of early votes in the Tar Heel State have come from women, while the rest have been by men or people without a gender affiliation on their voter registration.

Given the more than 42 million early votes cast nationwide, the 2022 midterm elections could be on track to host record turnout, depending on how many people vote on Election Day as well.

More than 158.4 million Americans, or about 63% of the voting age population, voted in the 2020 presidential election, according to data from the Pew Research Center.

And the last midterm elections in 2018 saw 53% of U.S. voting-age citizens cast ballots, the highest turnout for a midterm election in 40 years, according to the U.S. Census Bureau.

Voting in this midterm election could be higher than past midterm elections as well, according to a Pew Research Center survey of registered voters that showed 80% of Republicans said they are “extremely” or “very” motivated to vote compared to 79% of Democratic backers.

Drew DeSilver, senior writer at Pew Research Center, wrote that “one unknown factor” in determining how many people vote this year will be “how the many state voting-law changes since 2020 will affect turnout.”

“While some states have rolled back early voting, absentee or mail-in voting, and other rule changes that made voting easier in 2020 — or adopted new rules that make voting more difficult or inconvenient — other states have expanded ballot access,” DeSilver wrote.

But DeSilver also cautioned that even if the United States sees a record midterm election turnout year, the nation “likely will still trail many of its peers in the developed world in voting-age population turnout.”

“In fact,” DeSilver wrote, “when comparing turnout among the voting-age population in the 2020 presidential election against recent national elections in 49 other countries, the U.S. ranks 31st — between Colombia (62.5%) and Greece (63.5%).”

The number of ballots cast in person this year, 20 million, is relatively close with the 23 million voters who have returned mail-in ballots.

Not all mail-in ballots will be counted, however.

In Pennsylvania, the state Supreme Court ruled that ​​county boards of elections must “refrain from counting any absentee and mail-in ballots received for the November 8, 2022 general election that are contained in undated or incorrectly dated outer envelopes.”

In Wisconsin, an appeals court and a circuit judge have rejected attempts to get mail-in ballots counted if they include a partial address of the witness.

Visit NewsFromTheStates.com to monitor national trends and read the latest from across the States Newsroom network.