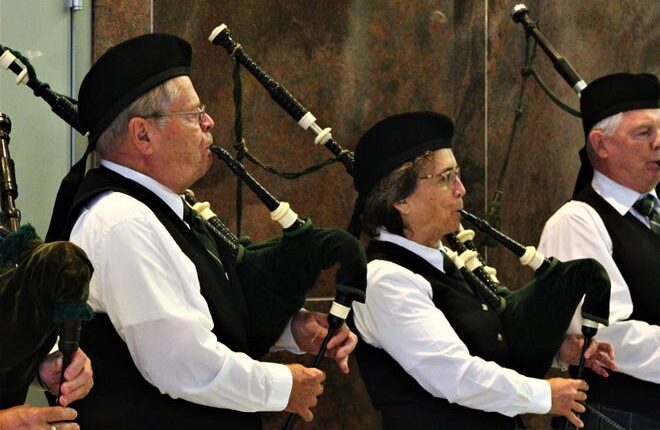 Brenden Sullivan doesn’t remember the events of Sept. 11, 2001. That’s because he wasn’t born yet, but the Grand Ledge High School student said his parents, their friends and syndicated TV news segments taught him about the terrorist attacks.

“It’s almost something that you can’t imagine in the present day,” Sullivan said. “I couldn’t imagine being alive for something like that.”

Lansing Fire Chief Brian Sturdivant focused his speech on Sullivan and all those born after Sept. 11, 2001, to explain what happened that day and the worldwide response to it. Nearly 3,000 people were killed by al-Qaeda, an extremist terrorist group, according to the 9/11 Memorial.

Students like Sullivan could best learn about Sept. 11 through books, magazine articles or old news segments to fully understand the gravity of the attacks, Sturdivant said. He hopes it inspires them to be of service to others, and not just through military service or becoming first responders.

Sturdivant started his speech to first responders, city officials and attendees at Lansing’s 9/11 event Sunday morning at City Hall explaining where he was when he first heard about the attacks. He was working out in a gym in Atlanta, Georgia, and didn’t bring his phone inside.

He returned to his vehicle with nearly 15 missed calls from his secretary, asking him to turn on a TV. He saw the chaos unfolding in Manhattan’s Financial District as the North Tower at the World Trade Center topped. The Atlanta Fire Department deployed a team of eight firefighters to travel to Manhattan.

Sturdivant reached family in Kalamazoo and urged them to stay indoors as more attacks throughout the country were feared when planes crashed in Shanksville, Pennsylvania, and hit the Pentagon.

They stayed safe. At least 21 Michigan residents, however, were killed that day. A firefighter on Sunday rang the department’s ceremonial bell after the names of each of those killed was read.

Lansing Mayor Andy Schor lived in Michigan at the time, but his family is from New York State. His father worked in Midtown Manhattan, several neighborhoods north of the World Trade Center. He faced difficulty reaching his dad by phone as calls overwhelmed cell phone towers.

From the archives:Behind the unprecedented call to stop air travel on 9/11

Both Schor and Sturdivant pivoted the second half of their speeches to the country’s response with thousands of first responders deployed to the city, communities across the country memorializing the attacks in their own ways and a worldwide response to the tragedies.

“The lasting lesson of 9/11 includes the nation believing that we are truly together,” Sturdivant said. “We are unified in our commitment to peaceful coexistence, to self-sacrifice and to bravery.”

Lansing Assistant Fire Chief Michael Tobin closed the ceremony by reminding attendees about the thousands of first responders who died after the attacks due to associated health conditions.

“Each and every one of us has been shocked and numbed by what we have witnessed in those following days,” he said. “But none of us should doubt the resilience and determination of this great and much-loved city, nation and its people.”

New in City: Traveling in a water wonderland | Lifestyles