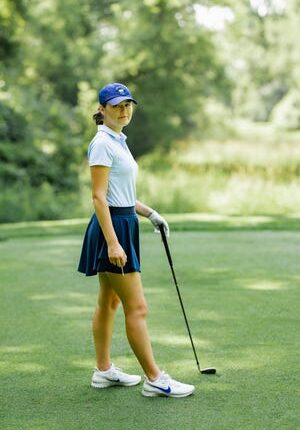 And her performance helped the Lansing Catholic girls golf team have another strong showing at the Division 4 state finals.

The Cougars took third in the Division 4 tournament at the Grand Valley State’s The Meadows with their score of 715.

Jackson Lumen Christi was the team champion with a score of 688.

Hauser tied for the ninth with a score of 167 for the Cougars, who had their top four golfers place among the top 30. Brynn Anderson carded a 171 while placing 17th, Julia Sambaer shot a 186 and was 24th and Addi Rule had a score of 191 and took 30th.

Haslett senior Sydney Dausman shot an 81 on Saturday while ending her career with by placing third at the finals. Dausman shot a 157 and was nine strokes behind champion Macie Elzinga of Byron Center.

Mason had the top team finish, taking sixth with a score of 772, while DeWitt was ninth with a total of 786. Junior Ava Clark led Mason with her two-day total of 183 while finishing 26th, while freshman Tylar Southwell placed 38th.

Junior Jordyn Crawley and sophomore Courtney Novak led the finishers for DeWitt. Crawley shot a 190 to placed 32nd and Novak was 37th with a 190.

Charlotte senior Hannah Robinson capped her strong career by finishing third at the state finals. Robinson had a two-day score of 150, shooting a 75 in each round. She finished eight strokes behind medalist Lauren Timpf of Macomb Lutheran North.

Williamston finished 10th with a two-day total of 739 to lead the performances by area teams. Sophomore Nicole Schafer was 12th with a score of 161 to lead the Hornets. Junior Ellie Thorburn was the next best finisher for Williamston and placed 42nd.

Sophomore Alena Li ended tied for sixth with her two-day score of 152 while helping the Okemos to a top-10 finish.

The Wolves were ninth with a score of 713 behind Li, who had a two-stroke improvement on Saturday. Senior Chloe Chen was the next best placer for Okemos and took 48th with a total of 183.

Grand Blanc’s Kate Brody was the medalist with a score of 145.

Grand Ledge sophomore Isabel Kelly was an individual qualifier and finished 19th with a score of 166.

What is one specific change the Detroit Lions should make out of the bye week?

Detroit Pistons season preview: Nerlens Noel is in Detroit to protect the paint and to be Jalen Duren’s ‘Looper’