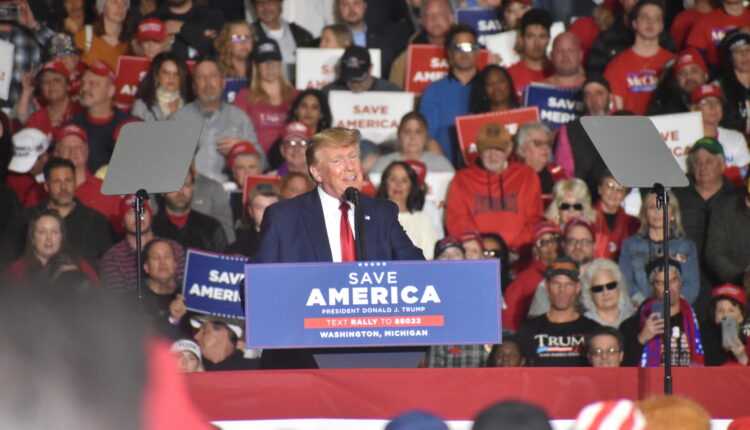 The U.S. House committee investigating the Jan. 6, 2021 attack on the U.S. Capitol sent a subpoena Friday to former President Donald Trump, demanding documents and testimony from the person the panel has said was central in orchestrating a plan to overturn the 2020 election that culminated in the insurrection.

The panel set a deadline of Nov. 14 for Trump to testify at a deposition in person or by video and Nov. 4 for Trump to produce documents related to his and his advisers’ involvement with the Capitol raid and other aspects of the plan to overturn the election.

In a preamble, Chairman Bennie G. Thompson, a Mississippi Democrat, and Vice Chair Liz Cheney, a Republican from Wyoming, summarized the committee’s findings in its months-long investigation.

“As demonstrated in our hearings, we have assembled overwhelming evidence, including from dozens of your former appointees and staff, that you personally orchestrated and oversaw a multi-part effort to overturn the 2020 presidential election and to obstruct the peaceful transition of power,” the letter reads.

Trump also summoned tens of thousands of supporters to Washington on Jan. 6, when Congress would be certifying the election results, and, despite knowing they were angry and at least some were armed, encouraged them toward the Capitol, the letter says.

He then refused to intervene, instead sending an incendiary tweet that could have incited further violence against Pence, according to the letter.

The subpoena demands 19 categories of documents related to the election as well as the various efforts to contest it and the attack.

The subpoena asks for communications with any members of Congress, and names U.S. Rep. Scott Perry, a Pennsylvania Republican.

The committee also seeks communications related to the committee’s work itself. Members of the panel have said Trump and people close to him have contacted witnesses in apparent attempts to dissuade them from offering truthful testimony.

At the panel’s likely final meeting last week, members approved a resolution granting Thompson the ability to subpoena Trump. Trump in response lashed out at the panel on his social networking site, Truth Social, but did not say whether he would comply with the subpoena.

Thompson did not answer directly when asked after that meeting if he expected Trump to comply.