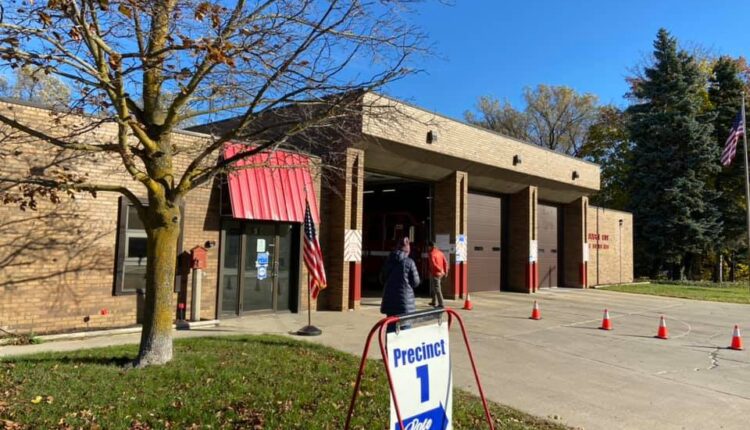 Inside Election Day With A City Clerk

What goes into planning and pulling off a local election? For Benjamin Marentette, who serves as city clerk for the City of Traverse City, election season is 90 days of hard work, a few sleepless nights, and a lot of attention to detail. From tedious ballot testing procedures to the coordination of a small army’s worth of poll workers, a lot happens behind the scenes before voters ever walk through the door to cast their ballots.

So, one day out from Election Day 2022, we’re peeling back the curtain on the election-planning process—from three months out, to the morning of, all the way to the counting of the ballots themselves.

Before Election Day
According to Marentette, the process of preparing for an election starts in earnest three months out from Election Day. One of the big pre-election priorities? The process of testing all the voting equipment, software, and balls to make sure the systems work properly come Election Day.

“We need to make sure [the machines and the software] properly count or reject ballots,” Marentette explains. If someone votes for too many candidates for one of the races on the ballot, for instance, then the machine is supposed to recognize that ballot as invalid and reject the votes. Ballot testing is intended to make sure that each voting machine is properly differentiating valid ballots from invalid ones.

“And that means we have to vote every possible valid combination of marks on ballots, and then every invalid possible combination,” Marentette adds.

Other pre-election preparations include lining up poll workers, training those workers so they know their responsibilities, and setting an Election Day schedule for everyone to follow.

“It is a tremendous volume of absentee ballot activity, which makes for a lot of work,” Marentette says. “There are a number of touch points there, from the application [for absentee ballots]to sending the ballots to voters, to receiving the ballots, verifying signatures, verifying address information, interaction with voters, and those sorts of things.”

Finally, Marentette says the Election Day lead-up tends to involve “a lot of outreach with more and more organizations,” ranging from news media to election watchdog groups “that want to ensure the rules are being followed by election officials and that voter rights are being protected and honored.”

The Election Day Shuffle
What does Election Day itself look like for someone like Marentette? Below, the city clerk sketches out his day, from (before) sunrise to (way after) sundown.

4:15am: Marentette’s alarm goes off and the day begins.

5:00am: Marentette arrives at the office.

5:15am: The chairpersons for each of the city’s polling precincts arrive at the City of Traverse City election headquarters, which is at the Governmental Center. “And then we’re giving out all of the supplies that can’t be delivered in advance by city staff to the polling places,” Marentette says. “So, that’s things like the tabulator, the ballots, the laptop that processes voters, things like that.”

5:30-7am: Early morning media inquiries and engagements roll in for Marentette, including live TV or radio interviews for morning news shows. “Usually, it’s just with local media,” Marentette notes of the media engagements. “But it ranges depending on the election.”

7am: Polls open and the first voters arrive to cast their ballots. With the opening of the polls, the city’s absent voter counting board is also legally allowed to begin counting City of Traverse City absentee ballots.

7-8am: Marentette says his phone tends to ring a lot throughout Election Day, including calls from polling precinct chairs who need help troubleshooting last-minute issues. Most of those calls come in during the first hour of the polls being open, as the teams at each precinct get into the swing of things. “There’s usually a couple minor things that might be missing in terms of supplies, or there might be some last-minute questions about getting the tabulators up and running,” Marentette says.

Phone calls from voters are also common throughout the morning hours. Many voters call to ask about polling precinct locations, while a smaller (but growing) number ring to inquire about the status of their absentee ballots. “If we haven’t received their ballot, we allow them to vote in person,” Marentette explains. “But we’ve got to document that in the system so that someone doesn’t get to vote absentee and vote in person.”

8am-noon: An hour or so after polls open, Marentette is out of the office making the rounds to each of the city’s polling precincts. “I’m giving them moral support, checking to make sure everything looks right, and interacting with voters. That goes on for a few hours.”

The afternoon: If the morning of Election Day is a carefully scheduled string of events, then the afternoon is a blur. Marentette’s job during this segment of the day is mostly to be reachable in case he needs to put out any fires. “Questions might come up from the team in my office, or from the teams out at the polling places, or from a voter counting board,” Marentette says. “And then there’s usually another round of visits to the polling places in the afternoon, if there’s an opportunity.”

8pm: After the typical late afternoon/early evening voting rush, polls officially close. “And then we’re troubleshooting and helping resolve any issues that come up in making sure that every precinct balances to the penny—which is to say, every single ballot is accounted for,” Marentette says. “So, we’re resolving any issues that are needed in order for each chair to close out their polling places.”

For a precinct to report its vote tallies, Marentette says election workers of opposing political parties must remove the results from their precinct’s tabulator, place them in a sealed bag, and physically deliver that bag to the county clerk’s office. The county clerk’s office then uploads those results into their system and provides the vote tallies to the Michigan Bureau of Elections.

“So, the results are populated on the county’s website and also aggregated at the state level,” Marentette explains. “And that’s how results come in and get reported. From there, people are able to make calls on how the race is looking.”

9:30pm: Chairs and vice chairs for each polling location pack up, lock up, and “start rolling back to headquarters at the Governmental Center.” Once they arrive, “we run them through a receiving board process,” Marentette says. “And that entails individuals who’ve been appointed by our election commission who are double-checking the work of the poll workers, making sure things are properly documented, and in essence, correcting any issues to protect the recountability of those precincts, should a recount be requested after the election.”

Late evening: The final piece of the puzzle for the City of Traverse City is the absent voter counting board, which Marentette says “is often the last to wrap up.” Especially since 2018 the game changed on absentee voting in Michigan, there are a lot of ballots to count and a lot of “different pieces to resolve in making sure that everything, again, is balanced to the penny.”

Midnight (and beyond): “On an election evening that wraps up fairly quickly, we’re home by midnight,” Marentette says. “And then there’s days where I’ve started to see the sun rise.” After the chaotic 2020 Election Day, for instance, the city clerk didn’t make it home until two or three in the morning.

What’s Marentette’s secret for pulling off the near-24-hour commitment of Election Day? “I actually have a caffeine sensitivity,” he shares. “So, I can drink a quarter of a Diet Coke, and it keeps me going all day long.”

Note: This story is an abridged version of an article that previously appeared in Northern Express. View the full version here.