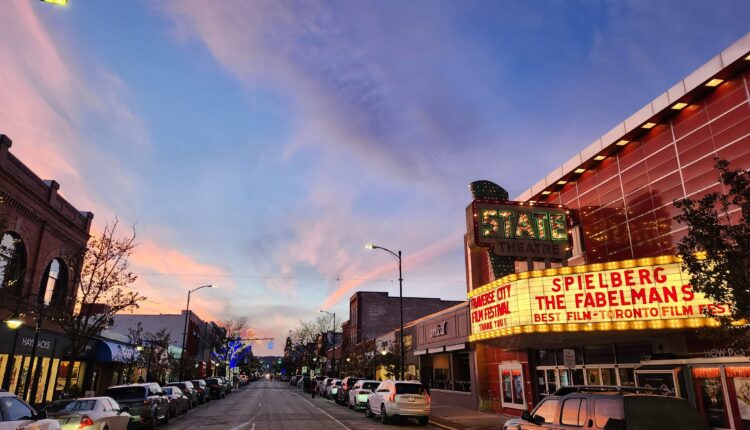 How Much Has Downtown Traverse City Changed In 15 Years?

Back in December of 2007, Ticker sister publication the Traverse City Business News spotlighted the “Downtown Die-Hards,” six businesses that had called downtown Traverse City home for at least 25 years. From downtown’s oldest business (Votruba Leather Goods, which first opened its doors in 1874) to other longtime staples, the article explored shop owners’ perspectives on what made downtown special, circa 2007, and how it had transformed across the lifespans of their establishments.

Fifteen years later, The Ticker is putting a twist on the “Downtown Die-Hards.” In celebration of holiday shopping season – and popular downtown events like tomorrow’s Men’s Night festivities – we sat down with four business owners to get their takes on how downtown TC has evolved since 2007. This time around, our panel includes one alumnus of the original TCBN article, as well as three business owners who started their own downtown journeys in 2007.

The Old Guard
The earliest incarnation of the downtown shoe store that would become Golden Shoes dates back to 1883 – though, as Co-Owner Bill Golden told the TCBN in 2007, the shop was originally founded by “the Friedrich family” and not by the Goldens. The Golden family – Bill’s grandfather and father – bought and renamed the business in 1954, and Golden Shoes has been a downtown fixture ever since.

In 2007, the TCBN asked Golden to reflect on the most substantial shifts that had occurred in since his family got into the shoe business. “The biggest change we have seen in downtown are the stores that are no longer downtown,” Golden replied. “Hamilton’s, Kresge’s, Woolworth’s, Trude Hardware, Penney’s and Sears: These were all great downtown stores that have either moved to the malls or are just not in business anymore.”

15 years later, Golden tells The Ticker that the core of what he’s always loved about downtown is still there today.

“Downtown Traverse City is still downtown Traverse City,” Golden says. “It’s still a destination for many people, and the number one focus for me personally is still the locals. Sure, tourists are very important, but being part of the community is number one for Golden Shoes. It’s always been that members of the community become friends of ours, and we love seeing those familiar faces. That hasn’t changed.”

What has changed since 2007, Golden continues, is the maturation of many of downtown’s staple businesses. From Miner’s North to Backcountry North to M22 and Cherry Republic, Golden says he’s been proud to see many downtown businesses invest in the growth and vibrancy of downtown, rather than following the path many earlier downtown establishments took to the malls. “We have all these examples of businesses that probably could have grown somewhere else, but they decided to grow in downtown Traverse City. That those businesses are staying downtown and investing in downtown and growing here is a true testament to what downtown is all about.”

If downtown in 2022 doesn’t look so different from downtown in 2007, though, Golden expects that some bigger transformations are coming in the next 15 years.

“There are a few big things that we need to figure out,” Golden says. “First, what are we going to do with this office space? There’s a lot of empty office space downtown right now. Those spaces used to be filled with people that were down here daily—shopping, eating lunch, getting a cup of coffee, things like that. And those offices are empty spaces now, and that affects our businesses. You see a lot of restaurants closed on Mondays – and some even on Tuesdays. And of course, that’s not just because we don’t have the office buildings occupied, but also because the downtown businesses can’t get the help. So, we need to figure that out as well.”

A New Era
One reason that the downtown of 2007 resembles the downtown of 2022? In many ways, 2007 was the dawn of a new era for downtown. That year saw the grand reopening of the Traverse City State Theatre, as well as the start of numerous businesses that are now flagships – including Red Ginger, Cherry Republic, and M22. A fourth downtown staple, Fustinis, didn’t open until June 2008, but was in the works throughout 2007. The ticker touched base with three members of that distinguished class to get their thoughts on downtown, 15 years later.

Biggest change since 2007? 15 years ago, downtown was really up-and-coming. It took us a while to fully expand, but it was great to be a part of making that wave of newness and excitement. Today, we are a mature downtown – stately and classic – but there is still so much great energy. That energy is continuous and constant, yet it can never be taken for granted. It takes continuous investment and new businesses to keep that alive, and we want to be a part of keeping it fresh and updated.

What is downtown TC’s best attribute? What’s it missing? Downtown TC’s best attribute is its constancy and it’s consistency. Very few downtowns can consistently provide energy at all times, and people are drawn to energy. Some downtowns, you go there expecting them to be vibrant, and that weekend, your favorite store is closed, or the restaurant you wanted to eat at has only one other table. It feels dead. TC is never dead. It’s like an Energizer Bunny for tourists and locals alike. I can go downtown and know there is a place to eat, the stores are open, people will be strolling. There will be people, action, and energy.

Why downtown? Born and raised in Traverse City, my brother Keegan and I have seen downtown struggle – like when the ‘new’ mall opened – and we wanted to be a part of the movement to keep downtown vibrant and worth visiting. When we first started with our kiteboarding school, the proximity to the bay was key – plus, we could see all our friends from high school on a daily basis.

Biggest change since 2007? Overall, traffic has really grown. Not long ago, we knew the majority of people working in the restaurants or other downtown businesses. Now, there are constantly new faces. So, the amount of development has exploded. We are quickly becoming a city.

What is downtown TC’s best attribute? What’s it missing? For us, being watersport addicts, the proximity to the bay is our greatest asset. But overall, downtown’s best attribute is the community and the business owners that put in the extra effort and care to make their customers experience the best it can be. By nature, local TC people are helpful, generous and some of the kindest people around. What we are missing is access to dedicated, maintained mountain bike trails through the State Hospital grounds and Hickory Hills. We have potential to be an amazing mountain biking destination.

Why downtown? We chose downtown because we saw strong foot traffic driven by a healthy mix of boutique retail, restaurants, and entertainment venues.

Biggest change since 2007? There have been so many positive changes to downtown since we arrived in 2008. You see even more interesting boutique retailers, a great mix of restaurant cuisines, a ‘main street’ market that’s extended to almost six blocks, east to west, from two. And then, of course, ‘the hole’ next to Horizon Books got filled! And downtown Traverse City continues to grow as a destination as development outside of downtown has expanded – with wineries, micro-breweries, bikeability, golf courses, and more.

What is downtown TC’s best attribute? What is it missing? This is truly a community engaged in the health and wellbeing of it’s city. Your voice is heard here. We have a strong and active DDA and DTCA. It’s really wonderful. The significant challenge we face is attracting young people to the area to put down roots, build a career, and raise a family.