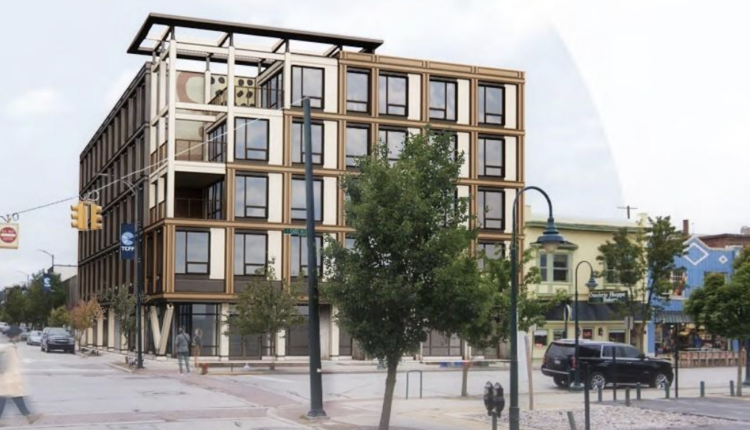 TRAVERSE CITY — Some downtown parking in Traverse City could become the site of 60 apartments aimed at a mix of incomes in a building designed with energy efficiency in mind.

HomeStretch Housing wants to build the five-story structure where Lot O currently sits at the corner of State and Cass streets, nonprofit Executive Director Jon Stimson told city commissioners Monday. He went through plans to build units ranging from 245-square-foot studios to 750-square-foot two-bedroom apartments. Up to half of the units would be aimed at tenants making 30 to 80 percent of area median income — $18,600 to $49,600, respectively, for one person, according to state housing agency data.

Bringing affordable housing downtown could address an issue that 73 downtown businesses cited in HomeStretch’s survey, Stimson said. Most were hiring but couldn’t find employees and nearly as many had employees driving 30 minutes to work or more. That led to 38 percent of them cutting hours.

That’s where the first proposal for a city and Downtown Development Authority initiative to redevelop some city parking comes in. Stimson said it checks off the desired goals, including maximizing the number of residential units, energy-efficient construction and minimal parking — the current design had about six spaces, with accommodations for bikes and other transportation.

Rents are penciled in starting at $800 for the smallest studios, up to $1,500 for one of the two-bedroom apartments, documents show. Up to half of those units may have housing vouchers, and Stimson said those would let tenants pay 30 percent of their income, whatever that may be. Someone earning $900 a month would pay $300 in rent, with the voucher covering the rest, for example.

The rest would be open to tenants making 80 to 120 percent of area median income, putting them in the “workforce housing” category, Stimson said.

Rents would include utilities so features like solar panels, a green roof and certification by Leadership in Energy and Environmental Design aim to keep both operating costs and rents low, Stimson said.

Michael Corby, Integrated Architecture’s executive vice president, said the firm’s design is a unique one that includes first-floor retail and a basement with storage space for tenants. And while the smallest studio apartments would have kitchenettes, they would also have a common room with a kitchen on the same floor where residents could socialize. He echoed commissioner Tim Werner’s description of the building as a community within a community.

It’s planned to be built using mass timber framing, a material that allowed a design below a 60-foot height cutoff.

That’s the threshold 13th Circuit Court Judge Thomas Power recently ruled that any part of a new building must fall below unless city voters approve it first, as previously reported. City planners had measured to the roof deck instead of including parapets, elevator shafts and other rooftop structures, including for TC Innovo Hall’s proposed apartments-and-retail building on Hal Street.

Traverse City is appealing to the ruling, as is the company behind TC Innovo Hall. And on Monday, city commissioners went into a half-hour closed session to talk about 326 Land Company’s latest attempt to overturn the vote requirement after its redesigned project also ran into Power’s ruling on the 60-foot cutoff.

Mass timer could also allow the use of Michigan-sourced lumber, Stimson said.

Financing the project won’t be easy, and even if HomeStretch Housing gets a $5 million Revitalization and Placemaking Program grant, the nonprofit is looking for another $3 million at least. Seeking Low Income Housing Tax Credits from the state is a possibility but one Stimson said he wants to avoid because of the program’s complications.

Werner said he encouraged the designers to push even harder on lowering the building’s carbon footprint, and suggested looking into ground-source heat pumps for heating and cooling. The city may consider the additional investment when determining the price of the property.

Commissioners had a few questions about some of the building’s particulars, while Mayor Richard Lewis asked Stimson what HomeStretch needs next from the city.

A purchase option on the land, Stimson said. Not having possession of the property makes financing the project, already akin to “carrying a bag of rocks up the hill,” even more tricky.

An updated appraisal of the property should be done in a few months, City Manager Marty Colburn said.

Stimson said he hoped to see it by the end of summer.

“We’re in cooperation with the pace you can deliver to us, we can act upon it,” he said.

NKOTB’s Joey McIntyre recalls this one time, in Grand Rapids in the 80s