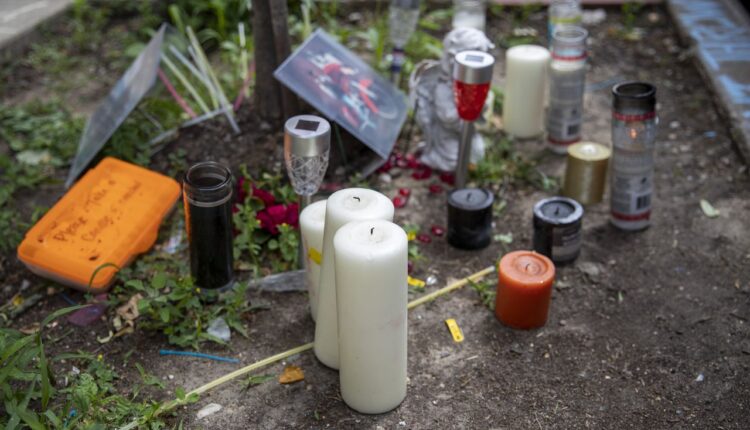 Grand Rapids recorded 23 homicides in 2022. Here’s where each case stands.

GRAND RAPIDS, MI – The city of Grand Rapids experienced an uptick in homicide cases in 2022 making it the second deadliest year in the last five years.

The homicides in Grand Rapids claimed the lives of 23 people in 2022. Among the victims were two babies, a 64-year-old man who was killed in a fatal fire and multiple teens and young adults.

One man is sitting in prison for fatally slamming his girlfriend’s baby to the ground. A man and his grandson were charged in the accidental killing of a 13-year-old boy. A Black motorist was shot in the back of the head by a Grand Rapids police officer during a traffic stop.

Those are some of the scenarios that tell a brief synopsis of the 23 homicides in Grand Rapids reported by police agencies in 2022.

The Grand Rapids Police Department handled 22 out of 23 of the reported homicides. Arrests have been made in 10 of those cases.

Nineteen people were killed by gunfire, making it the leading cause of homicide in 2022. Victims’ ages ranged from as young as 17 months up to 69 years old.

Although Grand Rapids has witnessed gun violence in the downtown area, the city’s top law enforcement officer has reiterated that the city is still a safe place to be.

“We didn’t really have a terribly high amount of drug-related murders,” Grand Rapids Police Chief Eric Winstrom told the city’s Public Safety Committee during a December meeting. “We did have a handful of domestic-related murders.”

“We did have, unfortunately, probably half of our murders were the sort of murders that don’t make sense,” Winstrom added. ” … Such as a heat of the moment where two individuals happen to be in the same place, same time and both armed with handguns and a fight ensued.”

Over the last six years, 2022 was the second highest for homicide cases with 2020 topping the list with 35 homicides.

Here is a list in chronological order of the 2022 homicides in the city of Grand Rapids, with basic information about each case:

A 2-month-old boy died from a “blow to the head,” the night of Jan. 15, according to Kent County’s medical examiner. The infant was hospitalized for 16 days before dying Jan. 31 while still in the hospital. Following a five-month investigation, Grand Rapids police arrested 22-year-old Abdullah Muhammad in connection with the child’s death. Muhammad is scheduled for trial March 13 on felony murder and first-degree child abuse charges.

Alexander Butler, 17 months old, died from injuries sustained at the hands of mother’s boyfriend. Alex Radulovic, 24, slammed butler on the floor out of frustration while he was babysitting the child. Radulovic, in a police interview, told detectives he was upset with the baby’s fussiness and crying but never intended to hurt him. Radulovic later pleaded guilty to second-degree murder and second-degree child abuse. He was sentenced in December to 31 to 100 years in prison.

Jashon Large, 19, suffered multiple gunshot wounds to his head and torso in a shooting in the area of ​​Hall Street SW and Phillips Avenue. Large was located inside a vehicle. Police determined the victim was alone in his vehicle when another vehicle pulled alongside him. No arrests have been made.

Patrick Lyoya, 26, was shot and killed by Grand Rapids police officer Christopher Schurr during a traffic stop on Grand Rapids’ Southeast Side following a struggle over the officer’s Taser. The high-profile case caught national media attention. Schurr, who has since been fired from GRPD, is set to stand trial in March on a second-degree murder charge.

To read MLive’s full coverage on the case, visit here.

Stacey Majewski, 38, was shot and killed after a domestic dispute. Police later arrested 24-year-old Khalil Childrey, who is charged with open murder and felony firearms. Childrey was living with Majewski and her two sons at the Grand Rapids home where the shooting took place. Police noted in a probable cause affidavit that officers had “multiple contacts” with Majewski and Childrey in the past, with Majewski claiming abuse. An upcoming appearance for Childrey in Kent County Circuit Court has not been scheduled.

Jakwon Jarrell Mills, 18, was injured in a shooting along Kalamazoo Avenue SE. Mills later died at an area hospital. The case remains open and no arrests have been made.

William Hannah, 40, was shot and killed in the 800 block of Martin Luther King Jr. Street SE. No suspects have been arrested in the case.

Naquie Mitz, 24, died in a shooting near South Division Avenue and Cherry Street SW. Police arrested 28-year-old Jeffrey K. Craig, who is accused of gunning down Mitz in downtown Grand Rapids. Craig is due back in Kent County Circuit Court on Jan. 9, 2023, for a status conference hearing. He is charged with open murder, carrying a concealed weapon, felon in possession of a firearm, and felony firearms.

Gabriel Hojnacki, 13, was accidentally shot by another 13-year-old boy at a home on Alpine Avenue NW. Three days after the fatal shooting, Kent County prosecutors authorized a juvenile charge of careless discharge of a weapon causing death against the 13-year-old who fired the shot. In August, prosecutors also charged George Jay Gross Jr., 60, for allegedly leaving his handgun accessible to children. Gross is scheduled for a status conference hearing on Jan. 23, 2023 in Kent County Circuit Court.

Marcell Depriest Ross, 30, died in a shooting at the 1100 block of Dallas Avenue SE, north of Hall Street. The case remains open and no suspects have been arrested.

Armonie Lee Acklin, 25, died in a shooting on Pearl Street between Monroe and Ottawa avenues. Three other people were also injured in the altercation. Police said a “long-running feud” between some in a wedding party and those selling items on the street led to an altercation outside Ambiance GR Kitchen & Lounge on Pearl Street. Genesis Kevin-Xavier Lewis, 24, was later arrested and charged with second-degree murder, three counts of assault with intent to murder, and felony firearms. Lewis awaits an upcoming hearing in Kent County Circuit Court.

Richard Jekel, 69, was found dead in the rear seat of a car by police. Doctors ruled he died as a result of a gunshot wound based off data on when his heart stopped from his artificial cardiac pacemaker. Devon Tashawn Matthews, 27, was arrested and charged with open murder and felony firearms in connection with the killing. Matthews’ case is scheduled for jury trial on April 24, 2023.

Charles James, 64, was killed in a fatal fire at an apartment building at the 1200 block of Bridge Street NW. Police arrested Tyeshia Dazua Minor, 39, about two weeks after the fire. Minor was charged with felony homicide and two counts of first-degree arson. A preliminary examination is scheduled for Jan. 10, 2023, at Kent County District Court.

Tony Vaughn, 58 and Freddie Lusk, 58, were both shot and killed in the 800 block of Martin Luther King Jr. Street SE. The shooting was the city’s only multiple homicide incident during 2022. No suspects have been arrested and the investigation remains open.

Ja’Juan Webb, 16, was shot and killed in the area of ​​Leonard Street NE and College Avenue. The boy’s father, Anthony Johntil Webb, was arrested out-of-state about a week later and charged with assault with intent to murder, felon in possession of a firearm, and felony firearms. Webb, 44, will head to trial on Feb. 6, 2023.

Terrell Woodard, 18, was shot and killed on College Avenue NE between Curtis and Brenner streets. The investigation remains ongoing and no suspects have been arrested.

Dacarri Brown, 22, was fatally shot near the intersection of Stewart and South Division. Grand Rapids police tried to provide life-saving help at the scene but were not successful. No suspects have been arrested in the case.

Jose Rivas, 31, died in a shooting at La Petite Chateau – a sports bar and restaurant – in the 2700 block of South Division Avenue. The investigation is still ongoing and no arrests have been made.

Tamiqua Wright, 30, was driving a vehicle on Oct. 11 at Eastern Avenue SE and 44th Street when police said she was shot by a passenger. Patrick Jones, 30, was charged with open murder in the killing. Jones, who was later wanted for Wright’s homicide, exchanged gunfire with police near a Grand Rapids school and shot himself moments after running from officers.

Santino Ysasi, 46, was found dead along Bridge Street NW. No suspects have been arrested in the homicide.

Mya Kelly, 23, was shot and killed inside a house on Canton Street SW near South Division Avenue. The investigation remains ongoing and no arrests have been made.

86-year-old Michigan man wins $569K lottery prize; ‘I was in such disbelief’