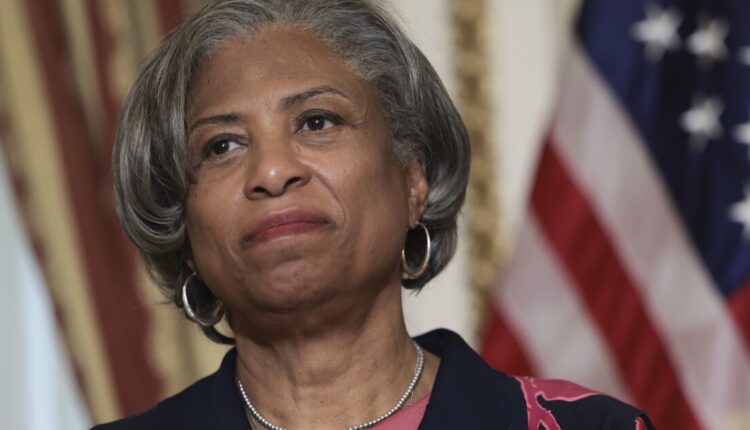 For the first time in about 70 years, Detroit won’t have a Black Democrat in Congress

DETROIT — For the first time in almost 70 years, this traditionally blue city, home to one of the largest African American populations in the nation, will not have a Black Democrat in Congress.

Detroiters could elect a Black Republican to the US House.

But GOP candidates face a skeptical voting bloc in this Democratic stronghold.

Losing a “voice” in Congress

That left an open seat to represent much of the Motor City.

And the candidate who emerged from the district’s crowded Democratic primary in August as Lawrence’s possible successor is not an African American.

At a recent get-out-the-vote rally inside a Detroit high school, Lawrence worried that the city could pay a price if no Black Democrat replaced her.

“I’m the vice chair of the Congressional Black Caucus,” she said. “And I know there are often issues that directly impact us left off the table. If you don’t have the Black representation, you don’t get a voice.”

Lawrence said some GOP colleagues on Capitol Hill simply avoid their concerns. She noted one recent argument in particular about student debt and income inequality with a US House member who is both Republican and Black.

“And he dismissed it all,” she said. “He said, ‘Oh that’s not an issue. I made it. If anybody wants it they can make it in America.’ Just ignoring the fact that there are inherent barriers that the Black community experiences. And as a Black man he just foo-fooed it and walked away.”

Democrats hope to get Black voters, often a backbone of the party, especially in urban areas, engaged in those issues — and headed to the polls on Election Day.

The party has deployed in recent days former President Barack Obama to headline rallies in several cities with significant African American populations. His event in Detroit attracted thousands of people.

But Detroit’s city clerk predicts only about one-third of the Motor City electorate will actually turn out to vote this year. That would be about 6 percentage points less than in the 2018 midterm election.

A personal connection to voters

The Republican running to represent Detroit in Congress says he can overcome apathy among Black voters because, as an African American himself, he walks in their shoes.

Martell Bivings is offering a GOP agenda targeting crime and taxes that he maintains Detroiters respond to. He says they just have to overcome being raised in a politically blue city.

But Bivings likely faces a steep climb translating that into support at the ballot box.

More than 90% of Detroit voters cast ballots for Democratic candidates for Congress in 2020 alone.

And the Democrat now seeking Detroit’s open congressional seat says he, too, connects with the economic fears pervading the community.

In this 2018 file photo, State Rep. Shri Thanedar gestures during a debate in Grand Rapids, Mich. Thanedar won Michigan’s 13th Congressional Democratic primary on Aug. 2, topping a field of nine candidates in a district that covers most of Detroit and potentially leaving the city next term without Black representation in Congress for the first time since the early 1950s.

State Rep. Shri Thanedar has been a ubiquitous presence along the campaign trail, appearing at everything from political fundraisers to modest events at city parks.

Thanedar was a poor Indian immigrant who became wealthy by starting a chemical business. He spent millions of dollars of his own money on the primary campaign and defeated eight other contenders, all of them African Americans.

Thanedar has a backstory he claims resonates with Detroit voters.

“I grew up in dire poverty,” he said. “My district is 20 to 30% at or below poverty level. Economic prosperity is very, very key. We need to bring in good-paying jobs.”

“Bring someone in here that’s gonna help us”

Thanedar’s message had traction among some waiting in line at the Detroit high school rally.

The idea of ​​economic empowerment attracts voters like Carmen Lewis far more than Bivings’ assertion that it takes a Black candidate to understand Detroit.

“We’re gonna vote for him because he’s Black? That ain’t got nothing to do with it,” Lewis said. “We want people that are gonna work for our city, that’s gonna help us grow. Because we’re already struggling. We’re already hurting. Stuff is high. Children are failing because of the school system. We need help. So, bring somebody in here that’s gonna help us, whether they’re Black, White, Chinese, Puerto Rican, it doesn’t matter.”

That sentiment echoes with Detroit voter Willie Wyatt, who says the colors he’s mostly concerned about are red versus blue.

The 83-year-old said he felt eternally disenfranchised growing up in the Deep South. That is, Wyatt said, until he watched the Voting Rights Act of 1965 signed into law by a Democratic president.

“I don’t vote for Republicans. Period,” Wyatt said. “And I shouldn’t be that hard on people but that’s the way I feel. I don’t know anything the Republicans ever done for a Black person. Or for that matter anybody else [who’s] bad.”

An analysis by the Pew Research Center found about a quarter of the members of Congress identifying as an ethnic or racial minority. And the overwhelming majority of them are Democrats.

But some African Americans fear Democrats simply take the Black vote for granted. The GOP is investing in Black candidates nationwide — including three running for the US House in Michigan.

When all the votes are counted after this midterm election, Michigan’s only Black representation in Congress could come solely from the Republican Party.