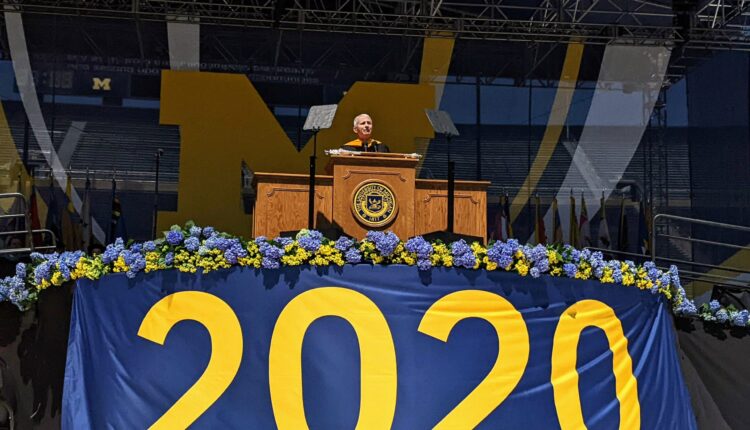 The University of Michigan’s 2020 graduates on Saturday finally received the Big House ceremony they were denied two years ago, with Dr. Anthony Fauci fittingly giving the “comeback” commencement speech for the students whose senior year at the university was upended by COVID-19.

Fauci serves as director of the National Institute of Allergy and Infectious Diseases and is a top administration adviser to President Joe Biden and past presidents, including Donald Trump. The physician has been a major target of right-wing ire as the face of the federal government’s COVID-19 response.

Seemingly acknowledging COVID-19 conspiracies during his speech, Fauci urged graduates to not turn a blind eye to “egregious distortions of reality.”

“Sadly, elements of our society have grown increasingly unphased by a cacophony of falsehoods and lies that often stand largely unchallenged, ominously leading to an insidious acceptance of what I call the ‘normalization of untruths,’” Fauci said.

He said that the lies are propagated through social media, news and even elected officials.

“The outrage and dissent against this alarming trend has mostly been muted and mild,” Fauci said, warning that continued indifference will lead to a society in which “veracity becomes subservient to propaganda.”

“Do not shrug your shoulders and accept the normalization of untruths. Because if you do, lies become dominant and reality is distorted. And then truth means nothing, integrity means nothing, facts mean nothing,” he continued.

Michigan currently has an overall vaccination rate (one or more doses) of 67%, putting it in the bottom third of state vaccination rates. About 78% of the entire United States population has received at least one dose of a COVID-19 vaccine.

Fauci encouraged 2020 graduates to seek out and listen to different opinions, but critically analyze information while challenging weak assertions or those built on “untruths.”

“As future leaders, we are counting on you all for that,” Fauci said.

In addition to the honking caravan of Trump supporters circling the stadium, a few dozen protesters stood at the corner of Stadium and Main streets, brandishing anti-vaccine rhetoric on signs while graduates and their families entered the stadium behind them.

The gathering was organized, in part, by Lena Epstein, a Republican candidate for the University of Michigan Board of Regents. Epstein unsuccessfully ran for Congress in 2018 and regularly espouses conspiracy theories.

On her social media platforms, she promoted Saturday’s “stop Dr. Fauci” protest as a campaign event to “welcome” Fauci to campus.

Ex-state Sen. Pat Colbeck (R-Canton) was present and told the Advance that Fauci’s involvement in the commencement was a “horrible decision” and a “slap in the face” to the 2020 graduates.

“These kids … have been denied their original commencement address because of the policies that he promoted,” Colbeck said.

Colbeck said he was taught to be rational and use logic as a University of Michigan student.

“We approach things from an objective perspective. And [Fauci’s] the exact antithesis of all of that,” he said. “… It’s a mockery of everything that’s on my diploma, frankly.”

Colbeck was elected as a tea party candidate in 2010 and unsuccessfully ran for governor in 2018. After losing to then-Attorney General Bill Schuette in the GOP primary, Colbeck has focused on promoting conspiracy theories about widespread election fraud and COVID-19 measures.

Lessons from the Detroit Lions draft of 2022