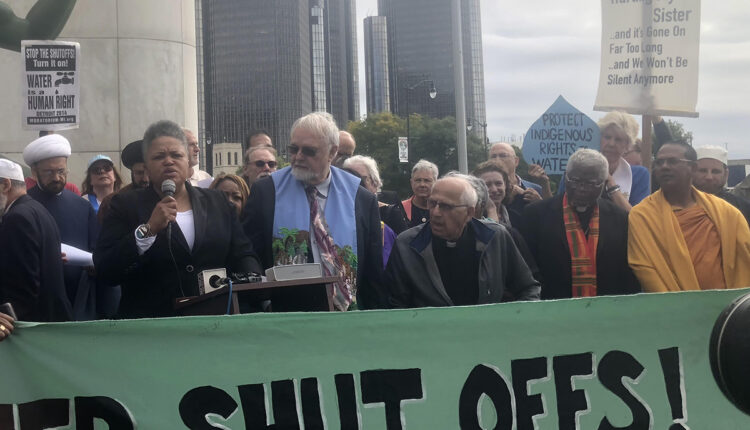 The Detroit Water and Sewerage Department is targeting 12,000 households with past due bills of $150 or more in a citywide canvassing effort to encourage residents to make payments or apply for help before the city’s water shutoff moratorium expires at the close of this year.

DWSD Director Gary Brown said the city is working on strategies to permanently end shutoffs, but in his preferred scenario those who participate in a payment assistance program won’t have to worry about losing access. Brown said the door-to-door campaign of roughly 30,000 residents seeks to raise awareness of the Water Residential Assistance Program and other programs to help Detroiters pay for housing costs and other utilities.

The outreach effort started this week and DWSD estimates it will take six to eight weeks to reach all 12,000 homes. The teams conducting outreach are knocking on doors to educate residents on the available aid options and, if they can’t be reached, the canvassing groups are leaving informational door hangers behind.

Brown said about $2 million in unused WRAP funds remain available and the department is trying to identify more of the low-income Detroiters who qualify.

“We know the customers that are delinquent,” Brown told BridgeDetroit. “We know the areas of the city that are disadvantaged and so we’re knocking on doors trying to get the information into the hands of the people that need it.”

In March 2020, Gov. Gretchen Whitmer announced a statewide moratorium on water shutoffs in response to the COVID-19 pandemic. When the statewide pause ended in 2021, Mayor Mike Duggan announced that Detroit would extend the moratorium through the end of 2022. The mayor has said it’s his goal to “stop water shutoffs to low-income Detroiters once and for all.

Amid the ban on shutoffs, DWSD’s collection rate has sunk to around 75%, down from 94% prior to COVID-19, Brown said. The dip has cost the department about $38 million this year.

Each percentage point raised in collections represents another $4 million in revenue, he said.

Brown said she doesn’t believe turning off water to delinquent households is an effective strategy and that he’s “all for” a moratorium. But it has to be for those participating in an assistance plan.

“You can’t just ignore the bill, not ask for help, not pay it and there’s no consequence,” he said.

“I could set up a system where every single Detroiter has an opportunity not to see a service interruption if they ask for help, no matter what their income is.”

But water affordability advocates have argued that many vulnerable residents either don’t qualify for the help or they can’t keep on track if they are accepted and that programs don’t do enough to address other systemic challenges.

Monica Lewis-Patrick, president and CEO of We The People of Detroit, said the water assistance funds are often “small pots of money for very restricted amounts of time.”

Despite unprecedented dollars for water aid as a result of the COVID-19 pandemic, there’s still “no real plan to address the legacy debt many Detroiters are carrying,” added Lewis-Patrick, who has long advocated on the city, state and federal level for affordability.

To further combat the decline in DWSD collection rates, Brown said his department also is trying to “strongly encourage” those who can afford to pay to do so.

“If you can pay your bill, you should. Be a good neighbor,” he said. “Don’t pass your bad debt on to people who can’t afford it.”

Meanwhile, the race is on to find a permanent funding source for the payment assistance programs needed to ensure the moratorium endures. Brown said that the first year is covered through a federal grant.

Detroit in January received $10 million in federal funding passed through the state to administer the Low-Income Households Water Assistance Program, a temporary emergency fund to help low-income families pay overdue water and wastewater bills. Brown said Detroit needs to sign up as many residents as possible to show the federal government there’s a long-term need to keep the program funded.

LIHWAP provides up to $650 in direct payment assistance to households dealing with past due water bills. The funds also cover the cost of reconnection fees if services were disconnected. Eligible participants must be under 150% of the federal poverty line or receive federal benefits.

Brown said if the state can continue providing $10 million each year, that would be enough to make the moratorium permanent.

“We got a one year tranche of cash with the promise of ‘let’s see your programs and how they work and then we’ll decide whether or not we’re going to (continue),’” Brown told BridgeDetroit. “It wasn’t a permanent funding source.”

Households must apply for WRAP through the Wayne Metropolitan Community Action Agency.

A larger group of 59,847 households with past due DWSD bills are being contacted by Wayne Metro through phone, text messaging, email and social media. The water department said it’s likely that not all of the customers in that group are low-income, but DWSD wants to invite them to apply to see whether they are eligible for help.

Wayne Metro is calling customers to promote programs that help Detroiters make payments for housing, energy, food, and home weatherization improvements. The agency has a universal application form that allows Detroiters to sign up for multiple programs at once.

“What we’re trying to tell residents is that yes, there’s a (shutoff) moratorium right now, but if your bill is extremely high there are some funds available we can leverage between multiple programs to assist you,” said Shama Mounzer, executive director of empowerment and integration services for Wayne Metro.

Lewis-Patrick said the city’s administration and the water department should broaden and strengthen ties with more of the organizations on the ground that are doing the work.

“We should be working in tandem. We want people to get those dollars,” she said of groups like We The People, Hydrate Detroit, The People’s Water Board, Michigan Welfare Rights and others.

Wayne Metro relies on DWSD to make connections with the low-income Detroiters who are the hardest to reach. Mounzer noted the agency experiences an influx of applications and requests for information each time the city goes door-to-door.

“They are often hitting a lot of the consumers that we’re not always able to get,” added Michele Robinson, executive director of green and healthy homes for Wayne Metro. “We just have a population within the city that just aren’t exposed to some of the traditional means of reaching out for assistance. Having (DWSD) going out with that door-to-door outreach improves access tremendously.”

“These are really issues of poverty,” Brown said. “Poverty can’t be solved by the water department or any utility. It’s a more complex issue and it needs people that are trained in talking to people and understanding their needs.”

authored by
First published at https%3A%2F%2Fwww.bridgedetroit.com%2Fdetroit-canvassing-to-reach-low-income-households-with-overdue-water-bills%2F