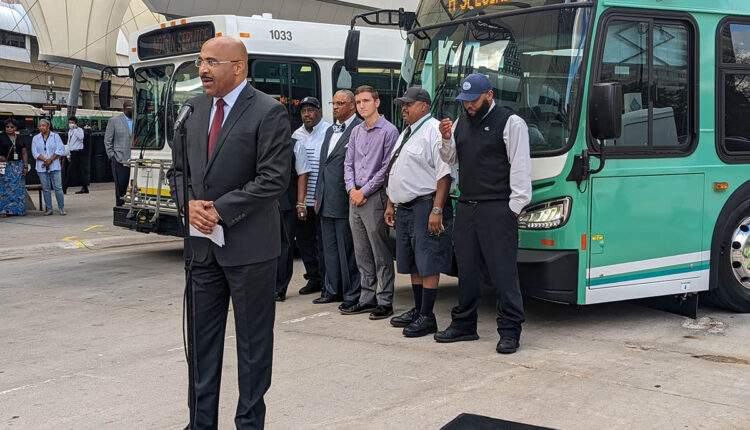 The Detroit Department of Transportation is putting more green into going green.

The city announced Monday that DDOT will be using a $6.9 grant from the Federal Transit Administration to buy four new electric buses – two 40-foot coaches and two 60-foot coaches – as well as to purchase and install charging equipment.

Detroit’s Executive Director of Transit Mikel Oglseby said in a statement that the FTA funding will allow DDOT to figure out which buses are best suited for the city’s climate, charging conditions, and other “real-world factors” before a larger scale investment is made in electric buses.

“We’re excited about this chance to make the smartest, greenest investment possible, which will benefit not only DDOT’s riders but the entire City of Detroit,” Oglseby said.

The city unveiled four electric buses in May as a part of a pilot program to evaluate whether environmentally friendly buses could outperform clean diesel buses. With the new buses, Detroit will have eight electric buses in its fleet. The buses paid for its electric buses this spring with a separate FTA grant under the Grants for Buses and Bus Facilities Program.

DDOT said earlier this month that it was getting 28 new clean-diesel buses to replace some of its aging fleet, which have traveled more than 500,000 miles and had been running as far back as 2010. Oglesby has said the city will get another 10 buses by the end of 2022 and 10 more are expected to arrive in the first quarter of 2023.

Oglesby has said each electric bus costs between $800,000 and $1 million, depending on which “bells and whistles” are added. The cost per clean-diesel bus is about $515,000, he said.

The FTA awarded a total of $1.66 billion in grants across the country after receiving 530 eligible project proposals, including from Detroit. The funding is part of President Joe Biden’s $1 trillion infrastructure bill signed last year. This bill was an effort to fix roads, bridges and airports across the country and to eliminate greenhouse emissions by 2050.

authored by
First published at https%3A%2F%2Fwww.bridgedetroit.com%2Fddot-gets-6-9m-federal-grant-for-electric-buses-charging-gear%2F