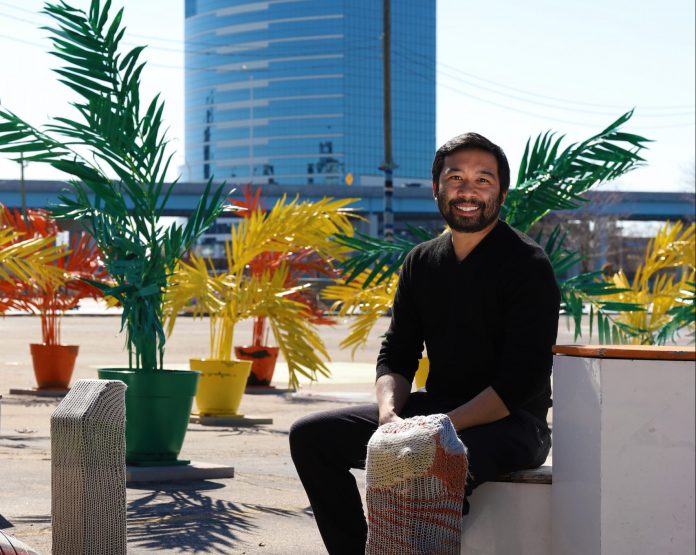 Jeffrey Augustine Songco sits in front of his work “Tropical Realness” in the North Monroe neighborhood. Photo by David Sparks

W.Whether asking the audience to get physically engaged with his work or taking a break to reflect on their own personal experiences, the art of Jeffrey Augustine Songco leaves a lasting impression.

One of his most complex and intricate installations, “Society of 23’s Locker Dressing Room”, made its debut at ArtPrize 2017. Among the many bits and pieces in the room was a collection of eye-catching rainbow-colored hoods. His work took the competition by storm and earned him the juried prize in his category.

A native of New Jersey, Songco has been interested in art his entire life, although he didn’t start out as a visual artist.

“As a child actor, I went to New York City to audition for roles that were mostly for whites,” said Songco. “When I was a little kid, I read these casting calls my mom would share with me, and I hoped that at the end of this paragraph it said, ‘All races welcome. ‘I grew up very, very conscious of my own ethnicity, my own race, and the impact on someone else’s production, whether it’s a community in this city or whether it’s literally on the stage. “ 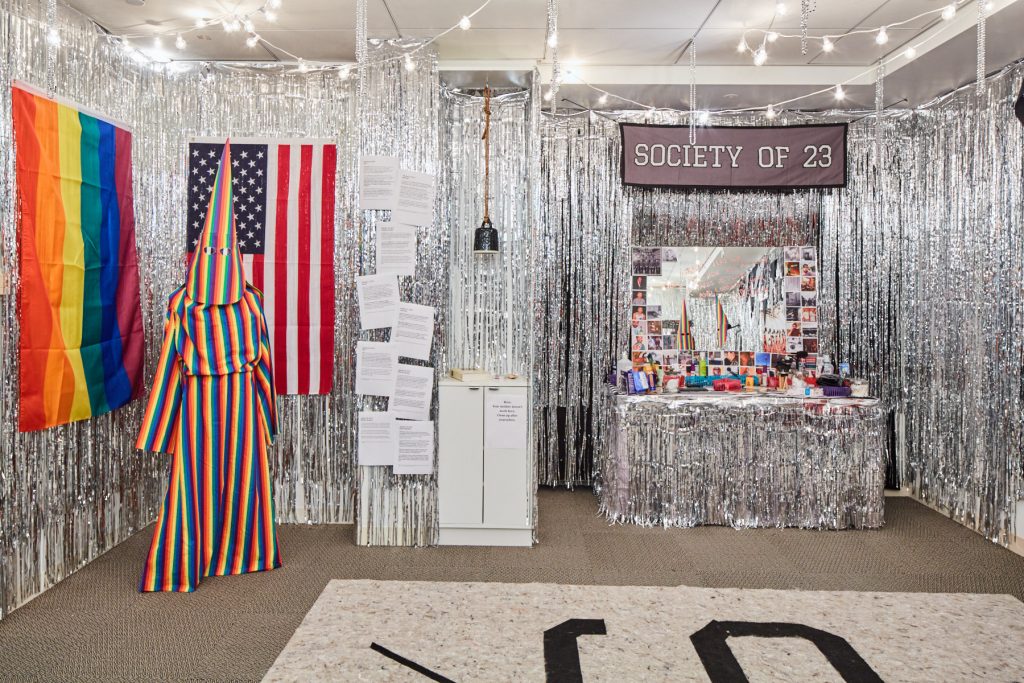 “Selection from the Society of 23 Changing Room” (2018) by Jeffrey Augustine Songco. Courtesy of the Spring / Break Art Show

You name it, he did it – ballet, tap, jazz, piano, choir, the list goes on. While enjoying the performing arts, he decided to switch gears and devote himself to the visual arts in high school, which prompted him to study arts at Carnegie Mellon University and nurture his growing interest in installation work.

“Installation art is creating a work of art that you can immerse yourself in,” said Songco. “It can be multimedia, there can be different components, and usually the art experience is one where you are surrounded by a lot of work. I just want the art visitor to experience a world that I create. “

As part of his thesis exhibition, Songco created a spy character. Perhaps without his knowledge at the time, the birth of this person would inspire a multifaceted oeuvre that would become an integral part of his portfolio as an artist.

“I wanted to give this spy character an origin story, and I realized that the CIA was recruiting members of the Skull and Bones Society at Yale University, and I thought that was very cool,” he said. “I’ve decided to make my spy character an origin story drawn from his own secret society. That’s why I created this group called the Society of 23, and as a spoiler alert, I play all the brothers in that society. I believe my body is a material that goes beyond “Jefferey taking pictures of himself”. I think my work describes these very complex narratives that tell stories that people can actually relate to. “ 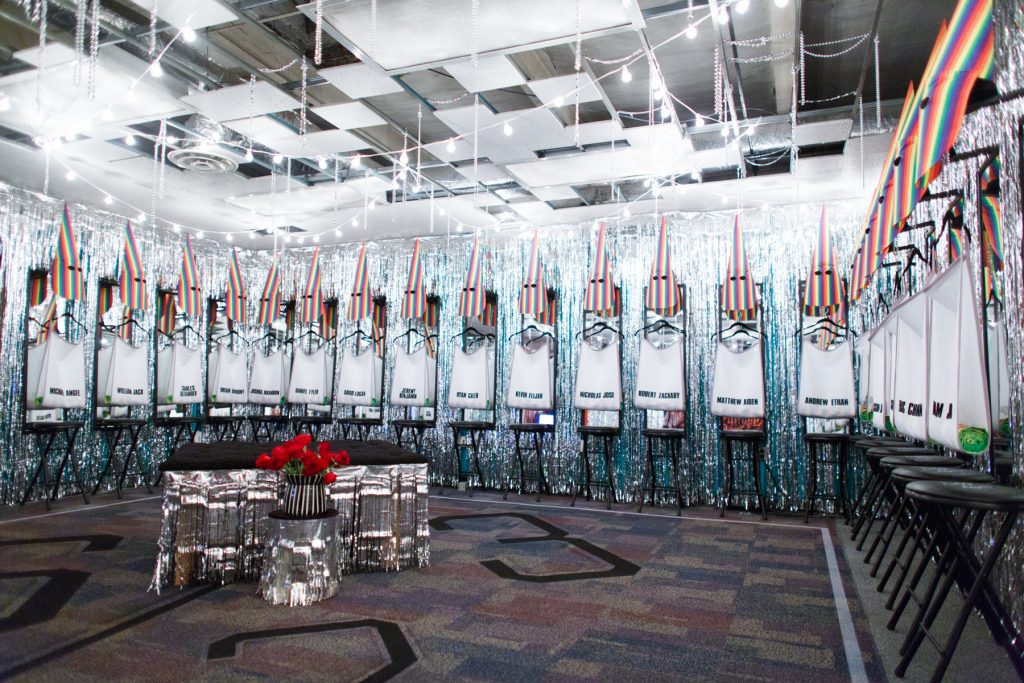 Songco developed a uniform as part of the brotherhood and called it “GayGayGay-Robe”. The robe may look familiar, but it doesn’t have the connotation you might think.

“I was doing research on uniforms and fraternity costumes in graduate school and I actually got down to the capirote, the robe used in Catholic fraternities in Spain that looks exactly like a KKK outfit,” he said. “As Americans, we see this completely different take on what this costume is. At the time, the Brotherhood color scheme was the rainbow color scheme, so it only made conceptual sense for me to make this costume out of fabric with a rainbow print, ”he added. “I wanted an origin story for the ritual robe, so I decided to create a space where I could put all 23 in one room and show where it exists and in what context.”

And that’s exactly what he did for his ArtPrize 2017 entry “Society of 23’s Locker Dressing Room”. Three years later, Songco’s Pittsburgh mattress factory residence explores a new level in his brotherhood history. Society of 23’s Trophy Game Room is a multimedia experience that invites guests to explore the Society of 23’s leisure activities.

“This room is set up in the same way as the Society of 23 locker room because there are only objects in the room,” said Songco. “There’s a bocce court, a beer ping pong table, a poker table, a neon sign, trophies, plaques – all these very specific details. In addition, I created the first episode of the Brotherhood’s reality show entitled “The Fabulous Society of 23” which is displayed in the installation itself on a projection screen and television monitor. “ 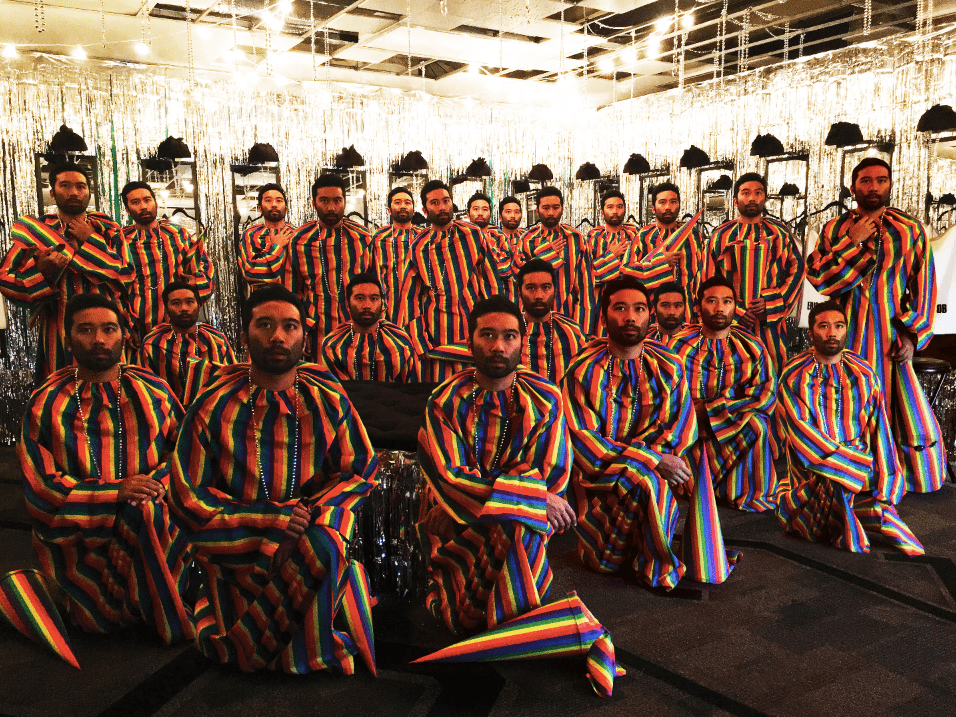 Even if you don’t get the chance to see Songco’s show at the Mattress Factory before it ends in November, you’ve likely seen his work near Grand Rapids. His 2015 ArtPrize entry featured a chain link fence covered with a rainbow of plastic beads. One of his most recent installations, “Tropical Realness” – a series of brightly colored potted plants – was in the Monroe Center last September.

“While I rely on this conceptual understanding of my production to create my work, I also want it to look fabulous. That’s why I often use the rainbow, I often use sparkles, glitter, crystals, anything that is shiny and fun. ”He said. “My work is always about complex symbols and how we interpret things and what meaning we attach to objects. I love the drama and humor of mixing meanings. “

Songco owes much of its success to the support it has found in the Grand Rapids art communities. During his time here, he was able to explore concepts that he said he might not otherwise have.

“ArtPrize and Downtown Grand Rapids Inc. have given me so many options,” he said. “Much of the work is not specifically related to the Society of 23 narrative, but it continues my aesthetic choices. It’s about the rainbow, it’s a big installation, it’s about my identity as a gay person of color. I am so grateful that I can grow and learn by participating in this work. “

This story can be found in the May 2021 issue of Grand Rapids Magazine. Subscribe here to have more stories like this sent to your mailbox every month.